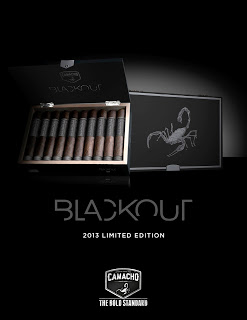 Camacho Cigars will be launching a new limited edition cigar called the Camacho Blackout Limited Edition 2013.  This marks the brand’s first new line since its rebranding “Bold Standard” campaign was launched last month.  The Blackout Limited Edition 2013 will be launched in five sizes.  The cigars will be available for pre-order at the 2013 IPCPR Trade Show with a targeted ship date to retailers in September.

The Camacho Blackout Limited Edition 2013 will have several differentiating factors in terms of the tobaccos used and the fermentation process.  The cigar will use tobaccos from four different years: Wrapper grown in 2006, binder from 2009, and fillers from 2003, 2008, 2009.  According to Camacho Cigars: “The rolled cigars where then aged together another 2-years, when the normal marrying process is normally just a few months.”

Camacho describes the differences in the fermentation process of the Blackout Limiteds Edition 2013’s Honduran wrapper. “(The) Wrapper, which was picked from the top 2/3’s of the plant, was fermented differently than most tobaccos. A process known as “press-fermentation” was used by placing additional weighton the top of the “pilones” (piles where the tobacco ferments), which intensifies the internal temperatures. The tobacco is worked hard, but carefully, then allowed a longer than usual resting period once packed in bales for aging. Leaves from the top 2/3’s of the plant get additional sun ripening, which boosts the level of sweetness with additional sugars being creating during the process of photosynthesis. The heavy oil noticed on this wrapper leaf is as a result of the plants natural defenses, protect itself by creating more oils to fend off the sun’s glare.”

At a glance, here is a breakdown of the Camacho Blackout Limited Edition 2013:

The Camacho Blackout Limited Edition 2013 will be made at Agroinustrias Laepe S.A. in Honduras.  The blend will be a multi-national blend from three countries:

Source: Information for this article was provided by Camacho Cigars.