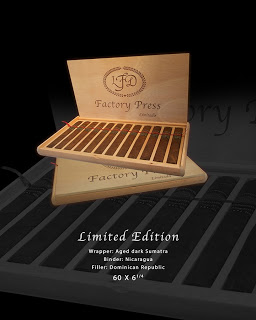 Litto Gomez, owner of La Flor Dominicana once explained the genesis for the Factory Press series: “For years I have been fascinated with our cigar box-pressing system. Many times I have thought how great it would be to share the process with our fans. That is why I’m offering a very special cigar shipped in the actual factory press. Because the concept is so special we needed to blend a cigar that will be totally unique to La Flor Dominicana“

The company mentioned that there would be also some Factory Press IV available at the trade show.

“At a glance”, here is the information on the La Flor Dominican Factory Press Limitado:

Source: Information for this article was provided via a press release by La Flor Dominicana.