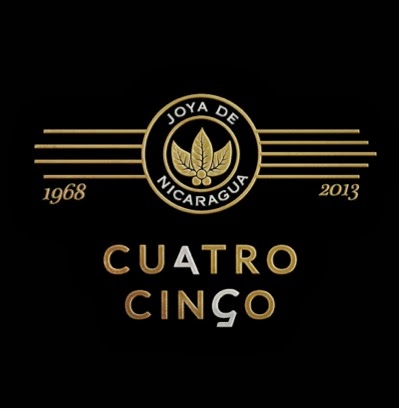 Back in May 2013, we did a feature story in which we talked about some changes happening around Joya de Nicaragua. These changes covered management, marketing, and operational changes. These changes were also coinciding with the company’s 45th anniversary.  Today, Joya de Nicaragua announced a new limited edition cigar to commemorate this event.  The cigar is appropriately titled Cuatro Cinco (which translates to 45). The cigar is scheduled to ship to retailers in November.  The announcement of the Cuatro Cinco was made in a press release by Joya de Nicaragua.

In the press release, Joya de Nicaragua Chairman Dr. Alejandro Martinez Cuenca commented, “We are very excited about Cuatro Cinco, for this is one of the few Limited Editions we have produced. With this cigar we are capturing the true Nicaraguan Spirit, rich in the tradition that embodies our cigars and that defines us as the archetypal Nicaraguan cigar maker, because before Joya, there was no Nicaraguan cigar. While this cigar promotes our heritage, it is also a celebration of the future and the many years we still have ahead of us. It’s been 45 years already, and we are just getting started!“

Also in the press release, Leonel Raudez, General Manager and Head of Production of Joya said: “this is also a tribute to the people of Joya, the ones that went and the ones that are still with us, even after 45 years. We Estelianos are proud of contributing to make Nicaraguan tobacco among the best in the world, and to celebrate that, we have made one of the most exceptional cigars we have rolled, using our finest local tobaccos and rolled by a selected few of our talented tabaqueros. The profile of this cigar is nothing like what we’ve produced, although the richness and complexity of the Nicaraguan grown tobaccos still predominates“.

At a glance, here is a look at the Joya de Nicaragua Cuatro Cinco:

Given the company’s Nicaraguan heritage, it is no surprise that the Cuatro Cinco is a Nicaraguan puro.  It features tobaccos grown in Esteli and Jalapa. According to the company, it includes a five year old ligero in the blend that has been saved in bodegas.  The filler tobaccos have been aged in oak barrels for over a year.

The Cuatro Cinco will be released in one size – a 6 x 54 “semi box-pressed”.  The cigars will be packaged ten per box.  A total of 4,500 cigars will be produced and each box will be numbered.