Espinosa Premium Cigars has released a short film entitled “The La Bomba Mikey Story” today on their website and YouTube Channel.  Earlier in the year the company began an advertising campaign to promote the strength of their extremely full-bodied  601 La Bomba line. The first ad introduced a skinny guy with permanent marker writings all over his face and arms, and surrounded by some of the guys from the Espinosa Cigars crew writing on him. The skinny guy, who eventually was nicknamed “La Bomba Mikey” appears to have been overcome by the strength of the 601 La Bomba cigar. This ad also dared cigars smokers to take the “601 La Bomba Challenge” by posting a before and after picture of their experience with the cigar to prove they could handle it. 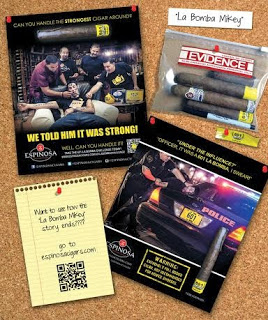 The follow up ad showed La Bomba Mikey pinned to the back of a police car with the words “Under the influence? Officer, it was a 601 La Bomba, I swear!” After the encouraging feedback, the company knew they had to conclude the story somehow. So they created a short film to conclude the popular series in conjunction with a new promotional campaign “The 601 La Bomba Experience” contest which asks their smokers to submit their own La Bomba experience in video or photo.

The short film and contest details can be view on the company’s website at espinosacigars.com/labombamik