The Davidoff 2014 Year of the Horse is the second cigar by Davidoff to pay homage to the Chinese Zodiac.  Last December, Davidoff released their first cigar in this line, the Davidoff 2013 Year of the Snake.  This past June, when we first noted an appearance by Davidoff of Geneva North America Jim Young on Kiss My Ash Radio which confirmed a follow-up cigar – 2014’s Year of the Horse.  While only the packaging was shown at the 2013 IPCPR Trade Show, it was confirmed that this cigar would be a 6 x 60.  This was significant because it would become the Davidoff brand’s first 6 x 60 cigar.  I recently had a chance to smoke this cigar.   Overall, this cigar is one of the better limited releases by Davidoff and it shows that Davidoff can produce a truly outstanding cigar in a big ring gauge.

In a recent press release by Davidoff, they mentioned that while 2014 is the Year of the Horse under the Chinese zodiac, it also provided an opportunity to pay homage to the company’s founder Zino Davidoff.  It turns out that Davidoff was born in 1906, which also happened to be the Year of the Horse.  It mentions that the Zino boasted many of the key traits under Chinese mythology that belonged to the year of the horse – including being quick-witted, dynamic, sophisticated, and extroverted.

While it follows the Davidoff 2013 Year of the Snake, the similarities really stop there.  This is a different blend from the ground up – and delivers a completely different smoking experience. Without further ado, let’s break down the Davidoff 2014 Year of the Horse and see what this cigar brings to the table.

Blend ProfileThe Davidoff 2014 Year of the Horse is a Dominican puro.  The cigar features Davidoff’s Yamasa wrapper.   Wrapper from this region has been seen on several limited edition cigars over the past year by Davidoff including the Davidoff Madison Avenue 25th Anniversary, the Davidoff of Geneva 25th Anniversary, the Davidoff Golden Band Awards cigar, and Davidoff Masters Edition 2013 Club House ToroWrapper : YamasaBinder: San VicenteFiller: Olor Seco, San Vicente Ligero, Piloto Viso, Hybrid Seco.Vitolas AvailableAs mentioned the Davidoff 2014 Year of the Horse is a 6 x 60 vitola.  The cigars are packaged nine per box and there were 5,000 boxes made.

The Davidoff 2014 Year of the Horse’s Yamasa wrapper seemed darker than compared to the other Davidoff limited releases that used it.  I would describe the Year of the Horse’s wrapper as being a medium to dark brown with a little colorado red in it.  There is a slightly oily sheen on the wrapper.  There are some visible wrapper seams. The cigars I smoked did not have a lot in the way of visible veins.  The 60 ring gauge parejo was well-packed with no soft spots.

There are two bands on the Davidoff 2014 Year of the Horse.. The first band is similar to the classic Davidoff White label.  It features the name “Davidoff” in classic cursive gold-colored font on an oval field of white. There are small gold circles going around the perimeter of the oval.  The word “GENEVE” (in gold font) flanks to the right of the oval field. To the left of the oval it features the text “LIMITED EDITION”.

The second band is primarily red in color. There is a gold pinstripe toward the top of the band and a gold one toward the bottom. On the center of the band is an image of a horse in gold.  To the left of the horse it says “YEAR OF” to the right it says “THE HORSE” – both in gold font.

The packaging is a three compartment red-lacquered box.  This packaged was showcased at the 2013 IPCPR Trade Show. 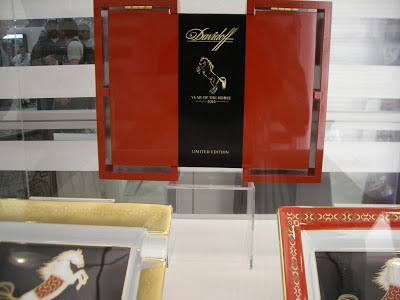 Prior to the start of smoking the Davidoff 2014 Year of the Horse, I went with a straight cut to remove the cap. Once the cap was removed I proceeded to start the pre-light draw.  Sweetness was the name of the game when it came to the cold draw. The best analogy I can give is that it was the closest thing to having cherry flavored hard candy on a cigar without tasting infused.  While it was sweet,  there was something very “tobacco-like” with this cigar. Overall, it wasn’t the most complex pre-light draw, but this one blew me away with how unique it was.  At this point, I was ready to light up the Year of the Horse and see what this cigar would bring to the table.

The pre-light draw provided a great appetizer of things to come.  There was a nice blast of sweetness to start – and it had that cherry flavored hard candy/tobacco feel to it.  Once the sweetness dialed back a nice mix of cherry, cream, and Davidoff styled black pepper emerged. The pepper could definitely be detected on the retro-hale, but from time to time, the cherry sweetness crept in as well.  As I retro-haled throughout the cigar, the pepper could get pretty sharp from time to time.  This is one cigar I highly recommend enjoying the retro-hale because it truly adds another dimension to the cigar experience.

By the end of the first third, some earth notes joined the cherry/natural tobacco sweetness and cream notes in the forefront.  The pepper notes moved to the background but could still be detected on the after-draw and retro-hale.

As the Year of the Horse moved into the second half, the flavors remained robust.  The pepper spice became more of a baker’s spice as it took on some of the sweet qualities.  Overall the sweetness, cream, and earth dominated as primary flavors.  There was a slight increase in the baker’s spice in the second half.  The hay notes remained in the background.  For the most part, this is the way the flavor profile remained until the end.  The cigar was flavorful right until the nub – which was almost a finger-burner.  The nub was cool in temperature and firm to the touch.

If you are concerned about how this 60 ring gauge cigar performs when it comes to burn and draw, don’t be.  This cigar scores extremely well here.  The burn line remained straight from start to finish.  There was a tiny bit of jaggedness from time to time with the burn line, but it was very limited.  The resulting ash was tight with a nice white color. There was little in the way of flaking or flowering from the ash.  The burn rate and burn temperature were ideal.

The draw was excellent as well.  There was a tiny bit of resistance to the draw – which is something I consider ideal.  This also prevented me from overdrawing this cigar – and as a result I feel this helped contribute to the cool nub at the end.
Strength and Body

From a strength perspective, I never expect Davidoff cigars to be nicotine bombs.  The Davidoff 2014 Year of the Horse is going to follow tradition here.  However I did pick up more strength on this cigar compared to many Davidoffs.  I assessed this cigar to be medium to full strength.  As for the depth of the flavors, there is some boldness.  Overall the flavors weighed heavier on the pallet and thus I assessed the Year of the Horse to be full-bodied.  When comparing strength versus body, I gave the advantage to the body here.

When I smoked the Davidoff 2013 Year of the Snake, I considered that to be one of the finest Davidoff cigars I ever smoked.  The Davidoff 2014 Year of the Horse is very good, but I still would not put it at the Year of the Snake level.  I loved the flavors on this cigar, and felt it brought a lot of unique qualities as far as a Davidoff goes. This is going to be a pricey cigar.  It is going to carry an SRP of $31.00. For cigar year 2014, we introduced a change to our “Assessment Rating” to incorporate price into the picture. The $31.00 price point did play into things here.  As for our numerical score, it is still price independent – and this is a cigar that scores very well. It’s a cigar I’d recommend to novice or experienced enthusiasts. With boxes of nine at $31.00, it still worthy of a box split.  As for myself, this is an excellent cigar and one that I would easily smoke again. This is still a must for Davidoff collectors.