La Aroma de Cuba, along with San Cristobal are the two Nicaraguan-made cigars in the Ashton Cigar portfolio.  Both brands are produced out of the My Father Cigars factory in Esteli, Nicaragua. This is the first new blend in the La Aroma de Cuba in two years (that cigar being the La Aroma de Cuba Mi Amor Reserva).  The name Noblesse is French and it translates to “nobility”.

Without further ado, let’s take a closer look at the La Aroma de Cuba Noblesse and see what this cigar brings to the table.

The wrapper might be one of the best looking rosado wrappers I have seen.  It has a medium to dark brown color with nice colorado red mixed in.  The surface of the wrapper is more on the oily side.  There are thin visible veins and thin visible seams on the surface, but overall this is a very smooth wrapper of high grade.

The Noblesse features two bands. The primary band features the La Aroma de Cuba logo and design highlighted with the brand’s trademark cuban-style female portrait. There is actually more light blue on this band than the other La Aroma bands. There is a tropical scene to the left and a castle to the right

There is a secondary band just below the primary band. It features the text “Noblesse” in gold font on a light blue background. The band also contains colors of gold, dark blue. red, ivory, and green along with some floral designs. There is a dark blue and gold shield to left. Under that shield is the text “LIMITED” in gold embossed font.To the right is red shield with a gold anchor with the text “EDITION” under it in gold embossed font.

There was also a light blue ribbon on the footer.

Prior to lighting up my La Aroma de Cuba Noblesse, I went with a straight cut to remove the cap. Once the cap was removed, I moved on to the pre-light draw. The dry draw provided notes of natural tobacco with a slight sweetness to it. There were also some notes of pepper that had a tingling effect on the tongue. Overall I considered the pre-light draw of the Noblesse to be satisfactory. At this point I removed the ribbon off the footer, lit up the Noblesse and awaited what the smoking phase would have in store.

The start to the La Aroma de Cuba Noblesse picked up where the dry draw left off as I got more notes of the sweet natural tobacco with some black pepper.  As the flavor profile took form, the natural tobacco notes became primary.  The pepper was more prominent on the after-draw and could also be detected on the retro-hale.

Toward the later part of the first third, I noticed a slight decrease in the sweetness with the natural tobacco.  The pepper notes were still prominent on the retro-hale, but now came into the fold of the draw settling as a background flavor.  As the Noblesse moved into the second third, a cinnamon note emerged in the background.  Combining this with the natural tobacco and pepper added a nice extra dimension to the flavor profile.

Toward the last third of the Noblesse is where I found the most changes.The sweetness to the natural tobacco had diminished and the tobacco flavors became more earthy. The pepper notes were now also in the forefront. In the background, there was a grassy flavor that surfaced.  At the same time, I found the cinnamon notes had also diminished. This is the way the flavor profile came to a close. While there was some spice at the end, the Noblesse never got harsh. The resulting nub was cool in temperate and firm to the touch.

The construction to the La Aroma de Cuba Noblesse was impeccable and this was reflected on the burn and draw.  The burn was a true “low maintenance” one – requiring minimal touch-ups along the way to burn straight.  The resulting ash was very tight with a nice white color.  There were no issues with flaking or flowering and the ash came off in nice clean chunks.  The burn rate and burn temperature were both ideal. 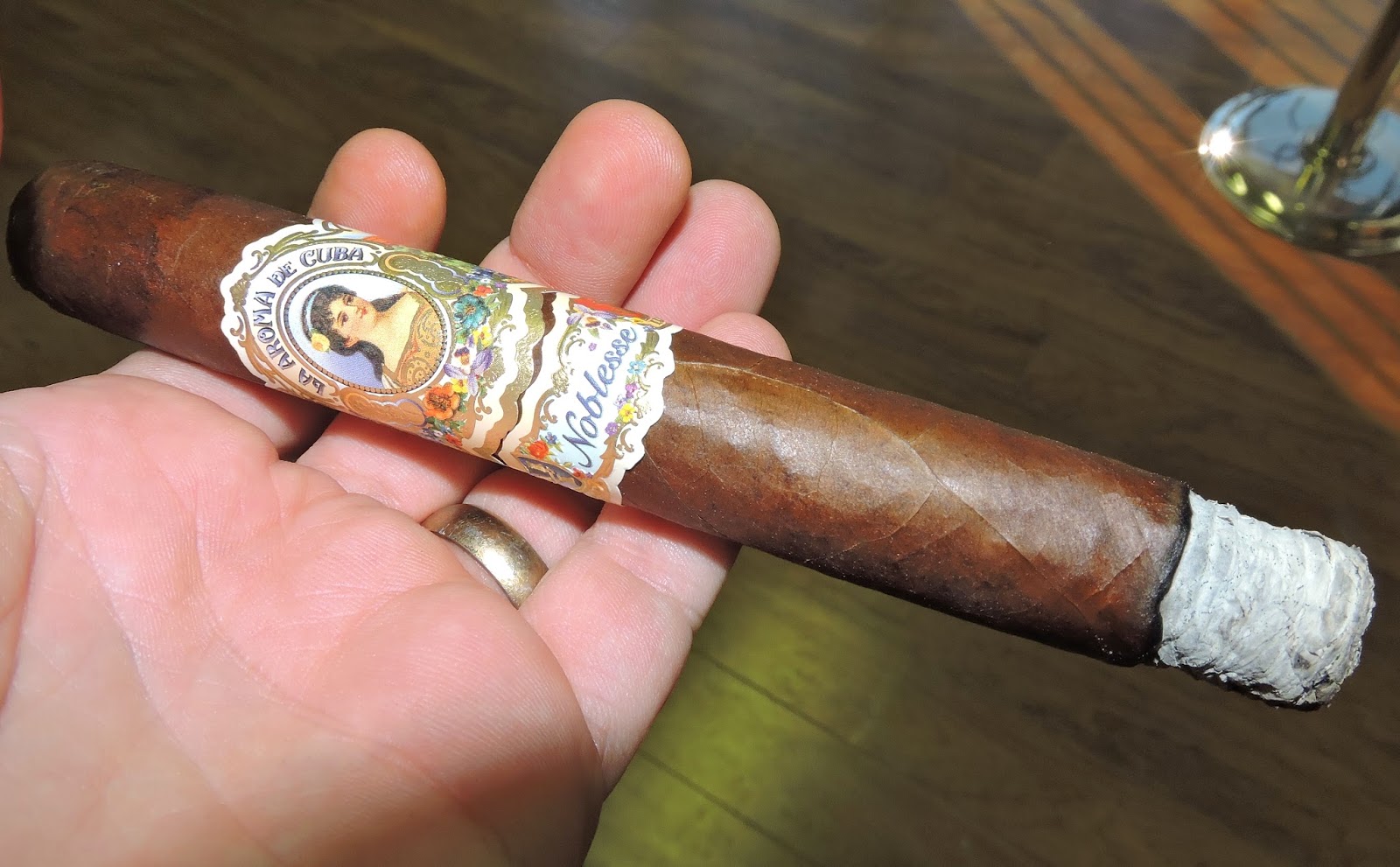 The draw was ideal.  It was not too loose and not too tight.  It made for an easy cigar to derive flavors from and a very enjoyable smoke.

In terms of strength, I found the La Aroma de Cuba Noblesse had some kick to it.  It wasn’t a nicotine bomb, but as I smoked it, I realized this cigar had some strength.  I assessed the Noblesse as being a medium to full strength cigar from start to finish.  As for the flavors, they also had some nice depth.  These flavors weren’t quite full-bodied, but they easily fell into the medium to full-bodied range.  In terms of strength versus body, I found the Noblesse provided a nice equilibrium between these two attributes as neither overshadowed the other.

Overall,  I found the flavor profile of the Noblesse to be a classic one.  This isn’t the most complex of cigars, but there is enough going on here to keep things interesting.  In particular, this cigar is really going to shine in the middle third when that cinnamon note surfaced in the background.  As mentioned this is a higher priced offering as the Noblesse comes in with a $16.00 price point.  This price might be a little high, but it still delivers a great cigar experience. This is a cigar I’d probably steer toward a more experienced cigar enthusiast, but certainly would not discourage the novice.  As or myself, I’d smoke this again and it’s worthy of a box split.