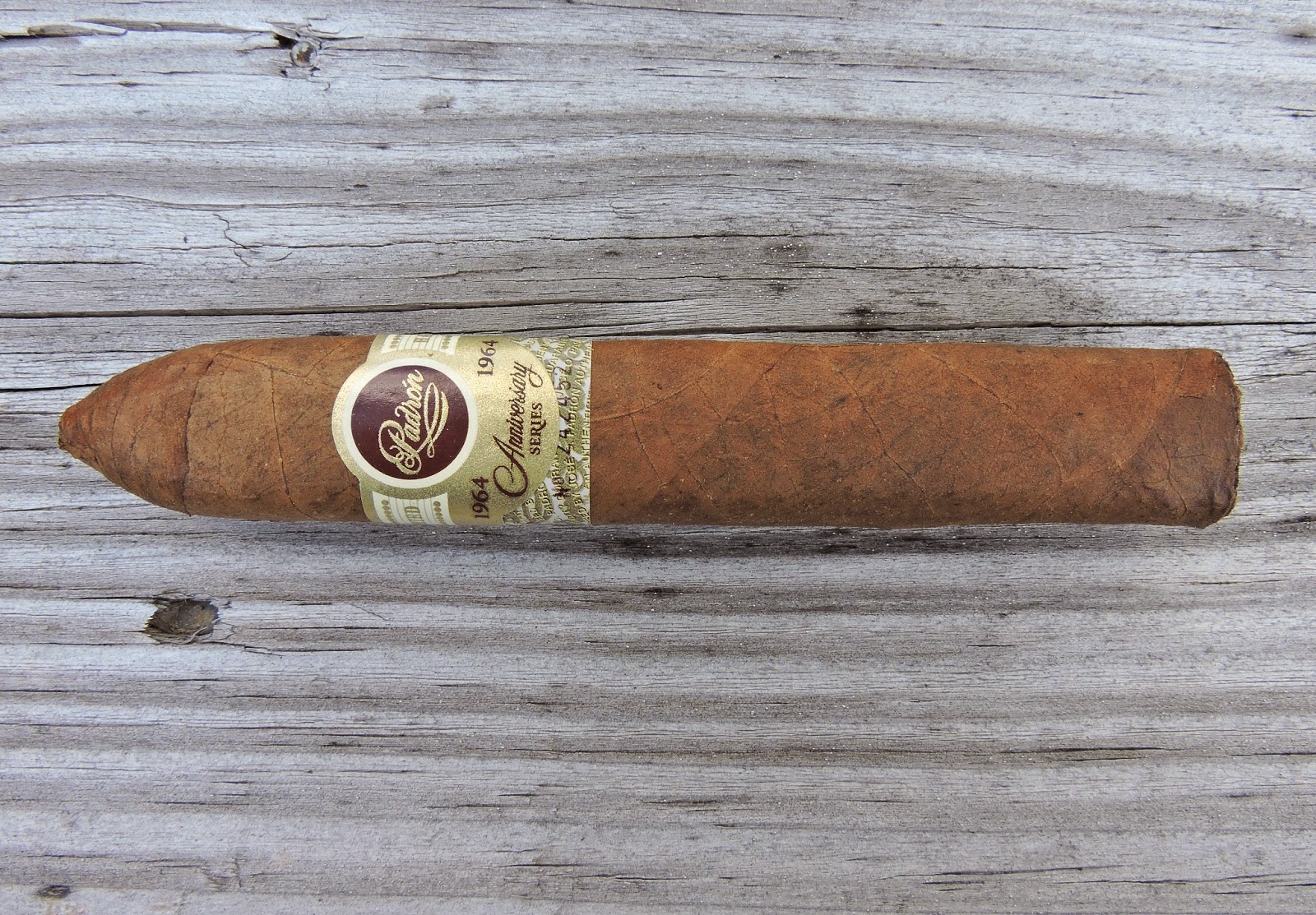 As for the TAA, this represents a small group of retailers (at press time the TAA web-site lists a total of 76 members). For the past several years many manufacturers have made available cigars that are exclusive to TAA member retail shops. As per their web-site, the TAA is defined as:“The Tobacconists’ Association of America, Ltd. is a trade organization established in 1968 by visionary retail tobacconists. By providing education, communication, research, advocacy, and member discount programs, The TAA works with our members and the industry they support to offer the tools and relationship building opportunities needed to maximize professionalism and success.”Blend ProfileWrapper: Nicaraguan HabanoBinder: NicaraguanFiller: NicaraguanVitolas AvailableFor historical reasons, we list most of the key releases in the Padron 1964 Anniversary.  Both are available in Natural and Maduro.  The Padron 1964 Anniversary Belicoso TAA Exclusive is packaged in boxes of 25 and has been released in a box-press format.TAA Belicoso: 5 x 52TAA Toro: 5 x 54“A”: 8 1/4 x 50Diplomatico: 7 x 50Piramade 6 7/8 x 42 x 52Monarca: 6 1/2 x 46Superior 6 1/2 x 42Torpedo: 6 x 52Imperial: 6 x 54Corona: 6 x 42Exclusivo: 5 1/2 x 50Principe: 4 1/2 x 46No. 4: 6 x 60SI: 6 x 60 (Limited Edition – Smoke Inn Exclusive)Draper’s 125th Anniversary: 6 x 46 (Rounded – Limited Retail exclusive for W. Curtis Draper)

The Padron 1964 Anniversary Belicoso TAA Exclusive Natural has a medium brown, wood-colored wrapper. Depending how the light hits it, it might give off a slight colorado red color to it. Upon closer examination, some darker marbling can be seen on the wrapper. The wrapper is nearly void of any visible veins and the wrapper seams are thin. The cigar has a square press with a very firm pack. Like the Belicoso Maduro, the tapering of the Belicoso Natural is a soft, more-rounded tapering.

There are two bands on the Padron 1964 Anniversary Belicoso TAA Exclusive Maduro. The design is common for the entire 1964 Anniversary line for both the natural and maduro.  The first band has the circular maroon and gold Padron 1964 logo surrounded by a ivory circle. Gold and ivory horizontal stripes moving away from the circle create almost a “pseudo band on the band”. Sitting on the stripes to the left of the circle is the text “IMPORTED” in gold font. To the right of the circle is the text “HAND MADE” also in gold and sitting on stripes.
The second band has a white and grayish color scheme. It rests just under the first band and serves as a band of authenticity for the Padron cigars – which are often subject to counterfeiting. It features the scripted Padron logo in gray and the text “AUTHENTICITY GUARANTEED BY JOSE O PADRÓN” in a gold(ish) font – all sitting on an ivory background. Each Padron 1964 Anniversary has a unique serial number located on that second band in black font. My serial number was 242452.

Prior to lighting up my Padron 1964 Anniversary Belicoso TAA Exclusive Natural, I went with a straight cut to remove a little more than half of the bellicoso tip.  Once the tip was removed, I moved on to the pre-light draw. The dry draw delivered notes of natural tobacco, nut, and light spice. Overall I considered this to be a very good pre-light draw. At this point I was ready to light up my Belicoso TAA Exclusive and see what the smoking phase would have in store.

The start to the Padron 1964 Anniversary Belicoso TAA Exclusive Natural provided a mix of earth, coffee bean, nut, and natural tobacco flavors.  The natural tobacco had a touch of cherry sweetness.  In the background was some mild pepper notes, but they were a little more prominent on the retro-hale.

During the first half, the natural tobacco and nut flavors emerged as primary ones.  These two flavors alternated as to which (or both) was a primary flavor.  Meanwhile, the coffee bean and earth notes remained in the background.  As for the pepper this was also a background flavor, but the level of spice had increased from the start of the smoke.

The start of the second half saw the nut flavors take center stage as a primary note.  The coffee bean and earth notes were still present as secondary notes. Meanwhile, I found that the natural tobacco sweetness dialed back considerably. The pepper continued to increase and by the final third, it was a primary flavor.  At times the pepper had some harshness to it.  This is the way the flavor profile remained on the Belicoso TAA Exclusive Natural until the end.  The resulting nub was firm to the touch and cool in temperature.

The construction of the Padron 1964 Anniversary Belicoso TAA Exclusive Natural was textbook Padron – meaning outstanding. This was reflected in both the burn and draw – both of which scored extremely well.  The burn line was just about razor sharp from start to finish requiring minimal touch-ups. The resulting ash was firm with a silvery gray color.  The ash itself came off the cigar in nice clean chunks and was not prone to any flaking or flowering.  The burn rate and burn temperature were ideal.

I did find this box-press to have a little more of an open draw.  This could have been why I got the harshness at the end. This was simply something of personal preference.

The start of the Padron 1964 Anniversary Belicoso TAA Exclusive Natural has medium strength. The strength slowly increases and by the second half, the cigar is firmly into medium to full strength territory. As for the body, I found it also started in medium territory. It progressed a little more rapidly than the strength level and by the second third the Belicoso TAA Exclusive Natural was in medium to full-bodied territory. While there was still some increase in strength and body during the later phases of this smoke, it never got into the “full” range for either attribute. For the most part the strength and body countered each other nicely with a slight edge to the body..