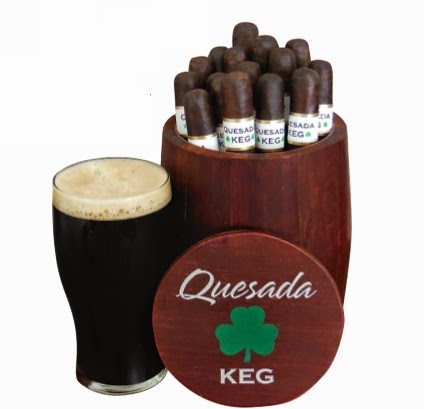 Quesada Cigars is teaming up with the Plasencia family.  This time it will be to produce a limited edition release for St. Patrick’s Day.The Quesada Keg will be feature a Pennsylania Broadleaf wrapper over Nicaraguan tobaccos.  The cigar will be made at the Plasencia factory in Nicaragua. This will be a significant release in that it will be the first Quesada branded cigar to be produced outside of the Dominican Republic.  As the name indicates, the cigar will be packaged in a unique keg container.

The cigar is designed to be paired with an Irish Stout – in a similar way the annual Quesada Oktoberfest release is designed to do.  According to Quesada Cigars, the cigar has notes of coffee and dark chocolate.

According to Terence Reilly of Quesada Cigars:

“Being half Irish I have always wanted to work on a project for St. Patricks day. Success with our Oktoberfest brand pairing cigars with beer got me excited to do something for St. Patricks. Initially, we couldn’t find the right blend in the Dominican to match the tasting notes of the more popular Irish stouts as we had done with marzen beers for Oktoberfest so we turned to our friends the Plasencias in Nicaragua. There, we found the blend we were looking for. It’s been a fun project to celebrate a fun day.”

       While this is the first Quesada branded cigar to be made outside the Dominican Republic, the Quesadas and Plasencias have produced cigars together before – most notably the Casa Magna brand which is already made at the Plasecnia factory.

At a glance, here is a look at the Quesada Keg: