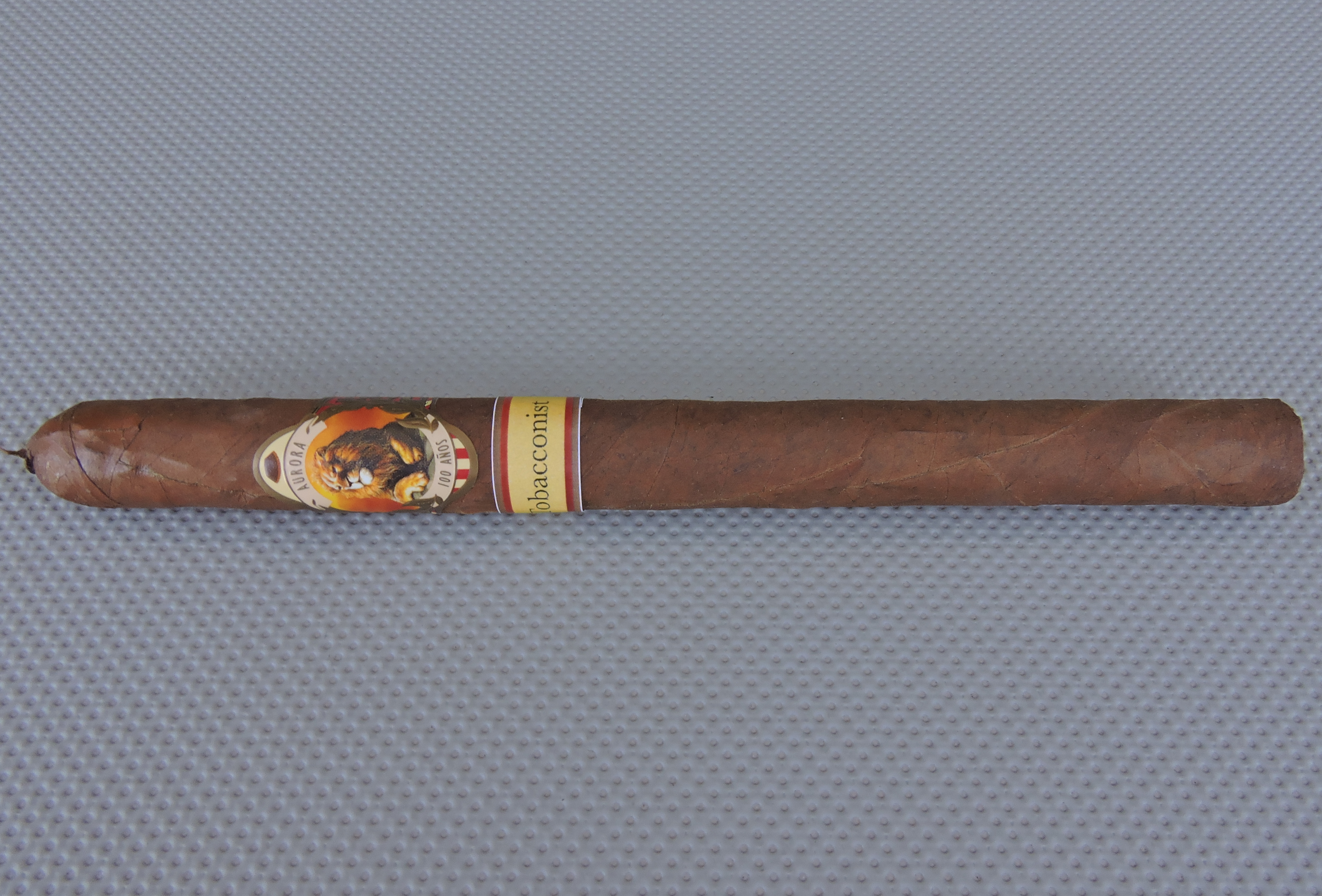 The original Cien Anos was launched in 2003. That cigar was launched to commemorate the 100th anniversary of the La Aurora cigar factory in the Dominican Republic. The Cien Anos was a Dominican puro featuring a Dominican Corojo wrapper. Due to popular demand, La Aurora made a decision to re-launch the cigar in 2012. That same year, there also was a limited edition cigar called the La Aurora Cien Anos Edicion Especial that was a release of the Cien Anos with a Connecticut Broadleaf.  The Cien Anos Edicion Especial was our 2013 Cigar of the Year and highest scoring cigar in the history of Cigar Coop (scoring a 98).

The La Aurora Cien Anos Lancero Cameroon was born last year when Nestor Miranda and Jason Wood of Miami Cigar and Company (the distributor in the U.S. for La Aurora) visited Burns Tobacconist. While there Burns Tobacconist owner Mike Hunter told them how much he loved the Cien Anos blend and how he wanted to work on a special size. Following the visit, Wood visited the La Aurora factory and discussed it with Master Blender Manuel Inoa. Inoa wanted to do something new and different, and this led to incorporating a Cameroon wrapper on the blend.

Without further ado, let’s take a closer look a the La Aurora Cien Anos Lancero Cameroon and see what this cigar brings to the table.

In addition to the Cameroon wrapper, the La Aurora Cien Anos Lancero Cameroon features Dominican tobaccos for the binder and filer.

As mentioned, the a La Aurora Cien Anos Lancero Cameroon is available in one size – a 7 1/2 x 40. The cigar is packaged in 25 count boxes and a total production of 50 boxes has been allocated to Burns Tobacconist.

The Cameroon wrapper of the La Aurora Cien Anos Lancero Cameroon has color that is a cross of medium brown and cinnamon.  The wrapper has a light oily complexion, but toward the cap it seemed to have a little more oil than the rest of the cigar. There are some visible veins and some visible wrapper seams.  I would categorize this cigar as rugged or being toothy. On the cap there is small pig-tail. Cameroon wrapper is known to be delicate, but this cigar appeared to have sturdier wrapper.

There are two bands on the Lancero Cameroon. The primary band features a combination of orange, gold, red, and pale yellow in the color scheme. In the center of the band is the La Aurora lion. Above the lion in thin gold font it says “AURORA”. Below the lion in thin gold font it says “100 ANOS”. The remainder of the band is adorned with pale yellow, gold, and red. On the back is a red oval. There are three lines of text in white font containing one word/number per line. The text is “AURORA”, “100”, “ANOS”. There is a small crown above the text. Going sideways on each side of the oval it says “HECHO A MANO” in small white font.

There is a secondary band that rests just below the primary band. It is pale yellow with red and brown pinstripe trim on the top and bottom. Prominently displayed on the pale yellow background is the text “Burns Tobacconist” in dark font.

The pre-light draw definitely showcased the sweetness a Cameroon wrapper can deliver. This continued right into the smoking phase.  The sweetness here consisted of a combination of natural tobacco, chocolate, and a slight citrus component. At the same time there was a combination of cedar and black pepper in the background. The retro-hale also delivered black pepper that layered the other flavors nicely.

During the early stages, the chocolate notes and natural tobacco were front and center. The citrus notes played less a role, but could still be detected. The cedar and pepper were still in the background and were joined by some subtle grass notes. As the cigar moved through the first half the cedar transitioned to more of a baker’s spice.

By the start of the second half, the natural tobacco notes were primary and had a slight sugar cane component. The chocolate and citrus notes now were less prominent, but still could be picked up in the background. The baker’s notes did increase along the way. Toward the last third, I found the flavor profile remained similar, but the baker’s spice had inched closer to the forefront. While there was a little more spice at the end, it never got overpowering. This is the way the cigar experience came to a close. The resulting nub was on the softer side, but cool in temperature.

Overall I found the burn to score well. The burn path remained straight for the duration of the cigar. The burn line itself had a slight bit of jaggedness from time to time, but this was more cosmetic than anything. The resulting ash was a salt and pepper color that leaned more on the darker side.  The ash itself was slightly loose. The burn temperature was ideal. In terms of the burn rate, I found this to be a slower burning cigar, but this proved to just extend the smoking time and didn’t lead to any other adverse effects.

The draw had a touch of resistance to it – something I consider ideal. Most likely this contributed to  the slower burn. While a lancero vitola can be painful with a tight draw, this was not the case here. There were no re-lights necessary during this smoking experience. At the some time, I was surprised with the amount of smoke the La Aurora Cien Anos Lancero Cameroon produced.

Overall the La Aurora Cien Anos Lancero Cameroon was an impressive cigar. I really liked how the Cameroon wrapper integrated with the La Aurora blend. It also seemed to come together nicely in the lancero format. It’s been said over and over again how much a wrapper can change a cigar, and with the Cameroon wrapper on the La Aurora Cien Anos blend this is very apparent. This is one of those cigars you are going to want to smoke undistracted, as you will really pick up the nuances of this blend. This is a cigar I would recommend to either the novice or experienced cigar enthusiast. I would definitely recommend this to a lancero fan. As for myself, this cigar is box worthy and one I would smoke again.