The E.P. Carrillo Short Run 2015 is the sixth installment of E.P. Carrillo’s annual Short Run Series. The Short Run series is meant to be exactly what the name implies – a limited production run cigar with a different blend each year. For the most part, these releases have been one and done. The Short Run 2015 is different as it is the first time the company is introducing a cigar with a Nicaraguan (Jalapa) Criollo ’98 wrapper. Recently I’ve had an opportunity to smoke the E.P. Carrillo Short Run 2015 in the Vencedores (Toro) format. Each year, this is an annual edition I look forward to. Overall, I found this to be a satisfying cigar and a fine addition to the series.

Without further ado, let’s take a closer look at the E.P. Carrillo Short Run 2015 Vencedores and see what this cigar brings to the table.

In addition to a Criollo ’98 wrapper grown in Nicaragua’s Jalapa region,  the remainder of the blend consists of Nicaraguan and Dominican tobaccos.

The name “Vencedores” translates to “conqueror”.

The E.P. Carrillo Short Run 2015 Vencedores’ Criollo ’98 wrapper has a roasted coffee bean color with a touch of colorado red in it. There is a light coating of oil on the wrapper. The wrapper had a silky look to it, but felt a little more coarse when touched. Any visible veins were thin and most of the visible wrapper seams were well hidden.

The band to the E.P. Carrillo Short Run 2015 uses the new design that was introduced last year with the E.P. Carrillo 5th Anniversary Cigar. It features the red square containing the gold “E.P.” cursive logo. Tha square rests on a thick black stripe that also contains several rows of gold pin striping and dotted lines. Just under the red stripe is the text “CARRILLO” in white font on a black background. Below the thick black stripe is a thick yellow stripe. The text Criollo 98 is in black cursive surrounded by three rows of gold dotted lines sitting on the thick yellow stripe. There is another black stripe below that with the text SHORT RUN 2015 in white surrounded by four rows of gold dotted lines. The band has gold trim across the top and bottom with the trim thicker on the bottom.

The start to the E.P. Carrillo Short Run 2015 started with notes of coffee, cedar, and some assorted pepper spices. During the first third, the coffee notes became primary and were soon joined by some earth notes.  At times the coffee note took on a chocolate like quality. Meanwhile the cedar and pepper moved into the background, but could still be detected on the retro-hale more prominently.

By the midway point I found the flavor profile of the Short Run 2015 Vencedores to remain the same, but a creamy note joined the spices in the background.

By the second third, the cedar notes joined the coffee and earth notes in the forefront. The coffee notes no longer exhibited the chocolate-like quality. There was still some pepper in the background that lingered on the tongue on the after-draw. I also noticed the cream notes started to diminish.

During the last third, the coffee, earth and cedar notes remained primary with the pepper in the background. The cream notes had pretty much dissipated. This is the way the cigar experience came to a close. The resulting nub was firm to the touch and cool in temperature.

Overall I found the burn to perform well.  The burn path remained relatively straight. The Short Run 2015 Vencedores did require some touch-ups along the way, but not an amount that I considered out of the ordinary. The burn line itself had some curvature to it. The resulting ash had a salt and pepper color. The ash itself was on the firmer side. The burn rate and burn temperature were ideal. 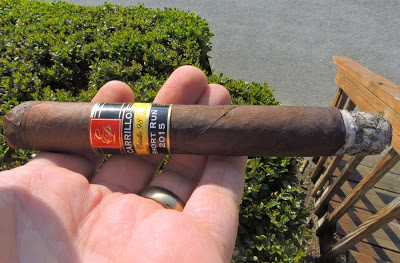 The draw had a slight amount of resistance to it – which is something I especially like on a parejo.  Overall I found this to be an enjoyable cigar to puff on.

The key thing when it comes to assessing the strength and body of the Short Run 2015 is the retro-hale. While a retro-hale will add some depth to these attributes on many cigars, with the Short Run 2015 this seemed more pronounced.  If you are not one to retro-hale, you will probably say this is a more dialed-bad smoke.

Overall I was quite pleased with the smoking experience of the E.P. Short Run 2015 Vencedores. While I didn’t find this to be an overly complex cigar, I did like the flavors this cigar delivered. As mentioned, this is going to be a totally different cigar strength and body-wise when it is retro-haled. While I wouldn’t put this as my favorite cigar in the Short Run series, it still was an enjoyable smoke.