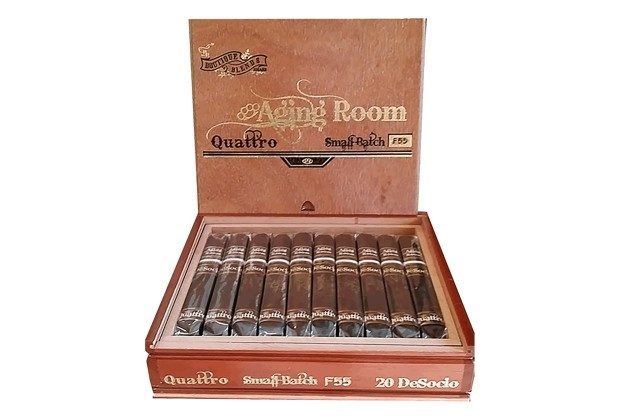 Wholesale distributor Alliance Cigar has announced it will carry a new exclusive size of Boutique Blends Aging Room Quattro F55. The Aging Room Quattro F55 DeSocio is set to make its debut at the 2015 IPCPR Trade Show. This new size becomes the fifth installment of Alliance Cigar’s DeSocio series – a series of sizes of popular cigar blends that are only available through Alliance.

The Aging Room Quattro F55 DeSocio is a perfecto box-press measuring 5 3/4 x 47. If the size and shape sound familiar, this happens to be the same size as the cigars in the Aging Room fortissimo series. The F55 blend features a Sumatra wrapper over Dominican binder and filler – which will basically be incorporated into the box-press shape of the ffortissimo.

The Aging Room Quattro F55 made history for Boutique Blends as it was named Cigar Aficionado’s #2 Cigar of the Year for 2013. The blend features a Sumatra wrapper over Dominican binder and filler.

The DeSocio series was the brainchild of Tom Sullivan, President of Alliance Cigar. Sullivan introduced the new series as a way to pay tribute to his maternal Grandfather who had an affinity for cigars. The other cigars of the series include the Alec Bradley Tempus DeSocio (6 1/2 x 54),  My Father Cigar’ Flor de Antilles DeSocio ( 5 3/4 x 54),  Oliva Serie V Melanio DeSocio (6 1/2 x 54), and the Alec Bradley Prensado DeSocio (5 1/2 x 56).

“We are honored to add the Aging Room Quattro to our DeSocio collection. Rafael Nodal and I have been friends and working partners for many years. This was a great opportunity for us to collectively create something unique and at the same time have some fun together.” said Sullivan.

“We share similar ideals and goals concerning the development and growth of our family owned companies. Tom and I have a number of other interesting projects up our sleeves that we are working on“, added Boutique Blends’ President Rafael Nodal.

The new Aging Room F55 DeSocio will be on display at Boutique Blends Cigars’ booth at the 2015 IPCPR Trade Show. The cigars are expected to ship by the end of July, 2015. Retailers can order the cigar exclusively from Alliance Cigar.