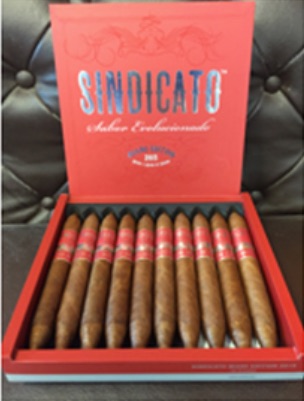 Sindicato Cigars has announced its first small batch release Sindicato Miami Edition will be heading to retailers this November.  The cigar will become the third Sindicato branded blend and will also be Sindicato’s first cigar made in the United States.

The Sindicato Miami Edition is a cigar that was blended by Arsenio Ramos.The cigar is being produced at the Casa Fernandez Miami factory. The cigar comes in one size – a 6 7/8 x 52 figurado.  It features 100% Nicaraguan tobacco from the farms of Eduardo Fernandez.

Pricing for the Sindicato Miami Edition is $12.95 per cigar. The cigar is being packaged in ten count boxes. Production is slated for 1,500 boxes for a total of 15,000 cigars.

At a glance, here is a look at the Sindicato Miami Edition:

As mentioned the Sindicato Miami Edition will come in one size – 6 7/8 x 52 figured.