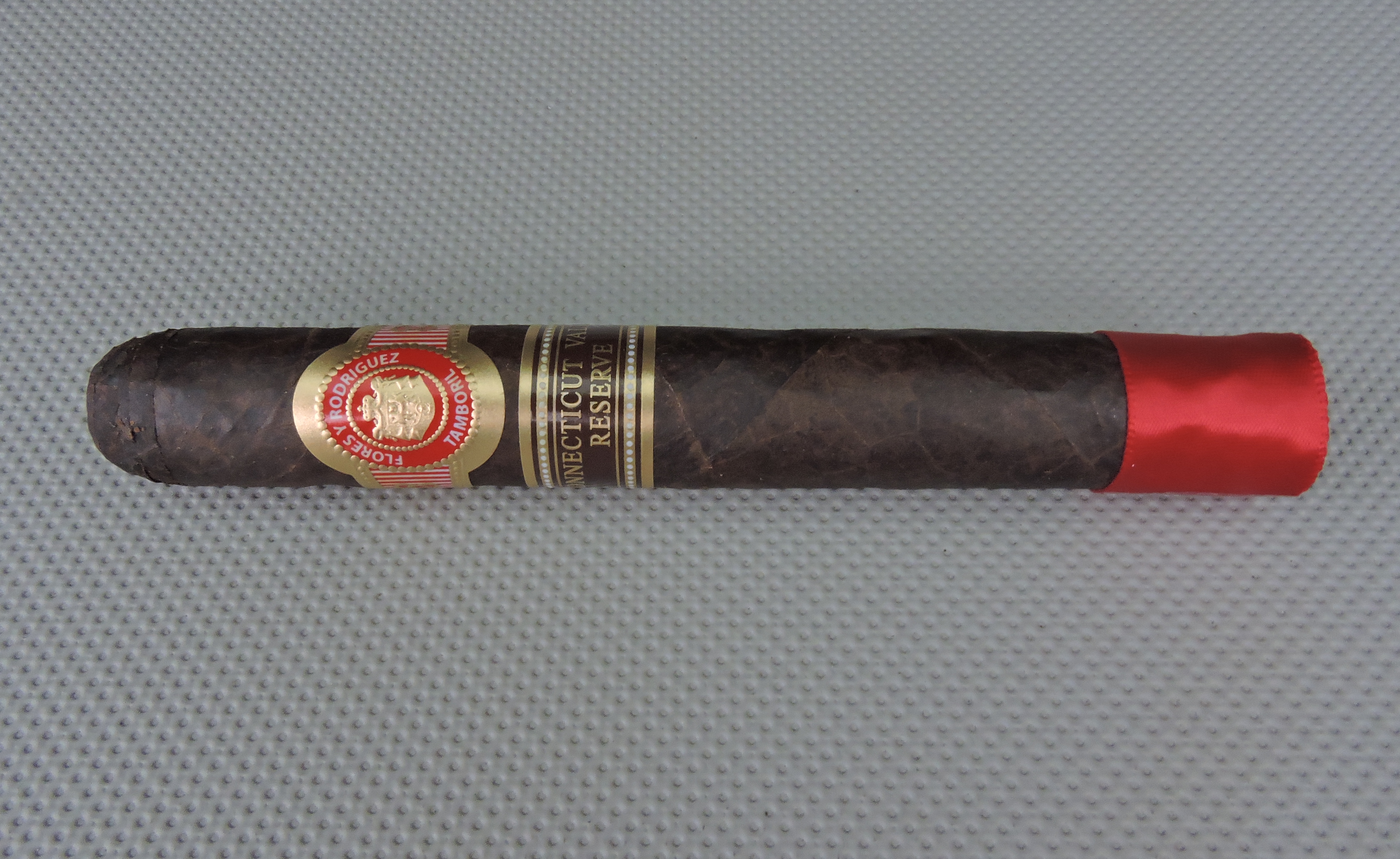 The Flores y Rodriguez Connecticut Valley Reserve line is intended to be a seasonal offering on an annual basis. It is also the most premium offering by the company. It comes in exquisite wood boxes and cigars will retail between $16.00 and $19.00 SRP.

Without further ado, let’s break down the down the Flores y Rodriguez Connecticut Valley Reserve and see what this cigar brings to the table.

The blend to the Flores y Rodriguez Connecticut Valley Reserve features tobaccos from four countries – United States, Ecuador, Nicaragua, and the Dominican Republic. The cigar is also highlighted by a double binder. The cigars are produced at the company’s PDR Cigars factory located in Tamboril, Dominican Republic.

The Flores y Rodriguez Connecticut Valley Reserve is available in four sizes. Each is packaged in 15 count boxes. 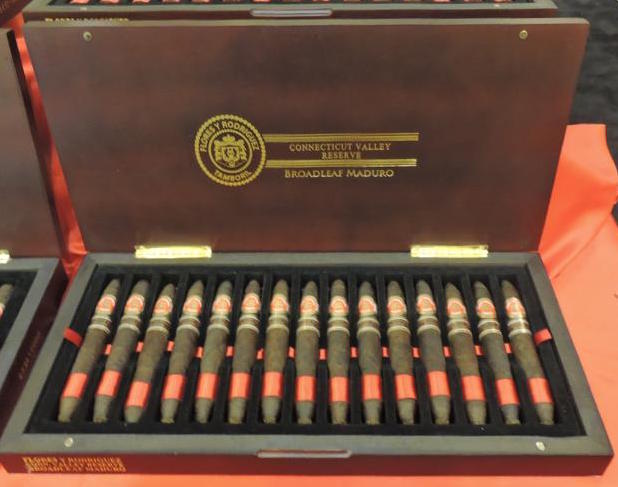 The Flores y Rodriguez Connecticut Broadleaf Reserve Gran Toro has a dark chocolate colored Broadleaf wrapper. The wrapper has a nice oily complexion to it. There are some thin visible veins and thin visible wrapper seams.

There are two bands on the Flores y Rodriguez Connecticut Broadleaf Reserve. The primary band has a red, gold, and white color scheme. The band is highlighted with a gold shield on a red circular field with thin gold trim.  A red ring surrounds the shield logo. On the upper part of the ring is the text “FLORES Y RODRIGUEZ” in white font on arranged in a curved fashion. On the lower part of the ring is the text “TAMBORIL” – also in white font arranged in a curved fashion.  There is red and white pin striping to the left and right of the circular ring. There is a red pennant-like designs on both the left and right of the band sitting on the pinstriped background. Each pennant has the text “HAND MADE” in white font sitting on it. On the far right is a white PDR star logo.  The band is finished with a thick gold trim around the edges.

The secondary band rests just below the primary band on the cigar. It is brown in color with the text “CONNECTICUT BROADLEAF RESERVE in gold font. The band has a thick gold stripe, white-dotted pattern row, and a thin gold pinstripe going in order from the outer part to the center of the band. On the far right is a gold PDR Cigars logo with the text “PDR CIGARS” in gold font arranged in landscape mode.

Finally, toward the footer is a red ribbon going around the cigar. On a side note, the ribbon on the Figurado is above the tapered footer.

As I normally do, I started the cigar experience of the Connecticut Broadleaf Reserve Gran Toro with a straight cut. Once I clipped the cap, I moved on to the pre-light draw phase. The cold draw provided a deep mocha flavor with a slight floral component to it. The pre-light draw was simple its make-up, but rich in flavor. This resulted in an excellent pre-light draw experience. At this point I was ready to light up the Connecticut Broadleaf Reserve Gran Toro and awaited what the smoking phase would have in store.

The start to the Flores y Rodriguez Connecticut Broadleaf Reserve Gran Toro started out with notes of rich mocha, cedar, and black pepper. The mocha notes moved to the forefront early on while the pepper and cedar moved into the background. Meanwhile the black pepper was also prominent on the retro-hale – along with a touch of cedar.

By the last third of the Connecticut Broadleaf Reserve Gran Toro, the coffee component of the mocha note had the edge over the sweet chocolate. The cedar and pepper spice combination made its way very close to the forefront while the roasted nut flavor dissipated. While there was some spice, the mocha notes balanced it nicely. This is the way the cigar experience came to a close. The resulting nub was excellent – firm to the touch and cool in temperature.

Overall the burn of the Connecticut Broadleaf Reserve Gran Toro scored quite well. The cigar took a straight burn track from start to finish. There was a slight curvature to the burn line. I didn’t find this to be a cigar to need an excessive amount of touch-ups. The ash was on the firm side. There was some light flaking during the second half of the smoking experience. The combustion was excellent as the cigar had an ideal burn rate and ideal burn temperature. 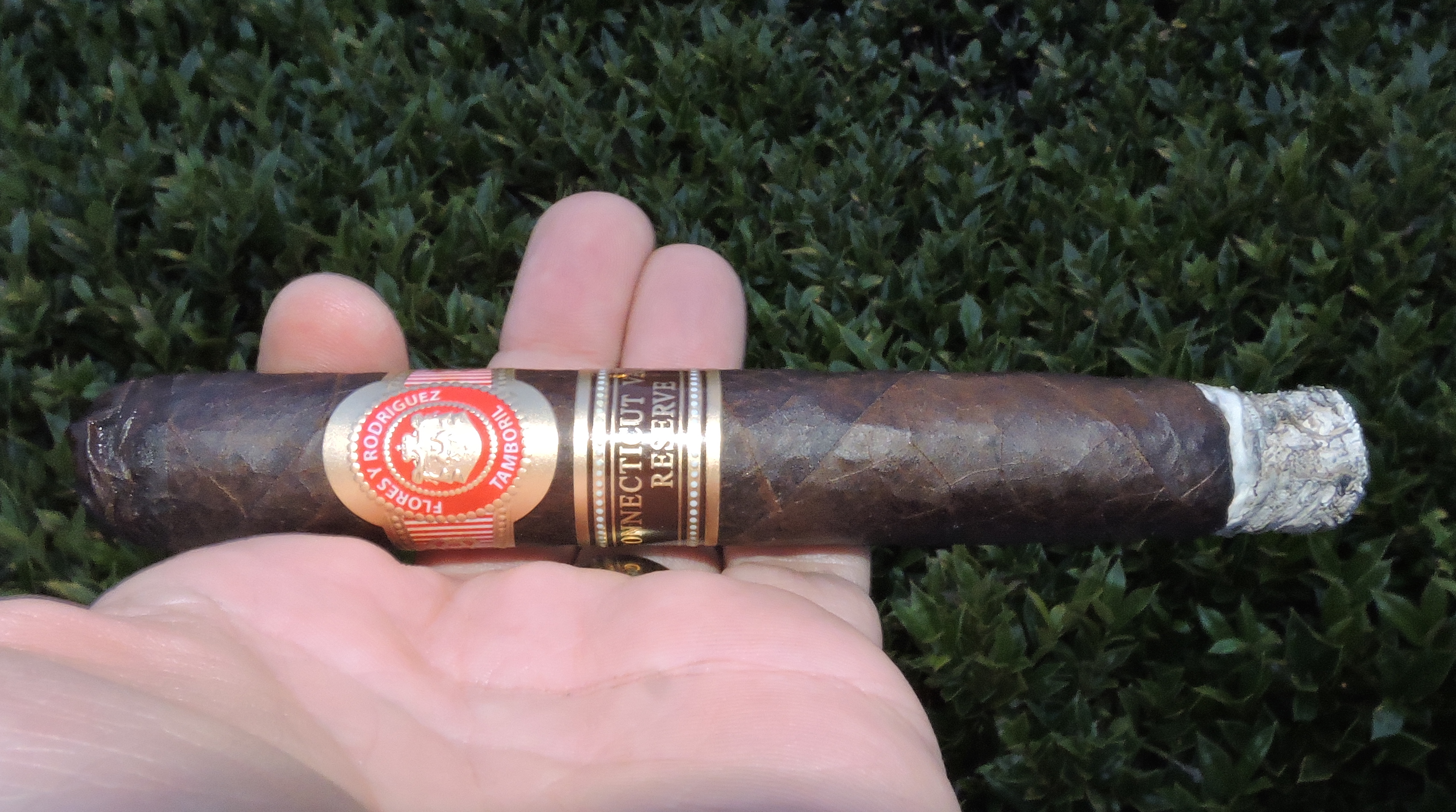 The draw to the Connecticut Broadleaf Reserve Gran Toro was not too loose, nor was it too tight. Overall, I considered this a low maintenance draw. In addition, this cigar delivered an abundant amount of smoke when puffed on.

From a strength perspective, I found the Connecticut Broadleaf Reserve Gran Toro started out medium. The strength slowly increased and by the second half of the cigar, the strength had progressed into the medium to full range. Meanwhile the flavors started out medium to full-bodied and increased at the same rate. By the second half, the Connecticut Broadleaf Reserve Gran Toro was in full-bodied territory. As for strength versus body, I gave the edge to the body.

The Flores y Rodriguez is a cigar that fired on all cylinders. It delivered excellent flavor, had excellent construction, and delivered a nice amount of complexity. This is one of those cigars that you when you smoke it in a relaxed setting as it will help to pick up the flavor nuances and transitions. It also is a cigar that is worthy of being an ultra-premium cigar. As I mentioned up front, this is one of the best Connecticut Broadleaf cigars I’ve seen out of the Dominican Republic in some time. This is a cigar I’d recommend to an experienced cigar enthusiast. It’s a great cigar for a novice to graduate to something on the fuller side. As for myself, it’s not only a cigar I would smoke again, but it’s also one I’d fight Chuck Norris for.

* PDR Cigars is a sponsor of Cigar Coop and Stogie Geeks