In 2014, PDR Cigars launched a line to commemorate ten years in the cigar business called the Flores y Rodriguez 10th Anniversary Reserva Limitada. It was back in 2004 when when Abe Flores joined forces with the Rodriguez brothers (Juan, Ysidro, and Luis) to form the Pinar del Rio brand, the brand that started it all for PDR Cigars. Since then the company has grown to build a very impressive portfolio of brands and blends. From its early days, the company has operated its own factory and in 2011, it opened a larger factory that has made cigars for many prominent cigar brands. Today I take a closer look at the Flores y Rodriguez 10th Anniversary Reserva Limitada in the Robusto format. Overall I found this to be quite an impressive release.

Without further ado, lets break down the Flores y Rodriguez 10th Anniversary Reserva Limitada Robusto and see what this cigar brings to the table.

The Flores y Rodriguez 10th Anniversary Reserva Limitada by PDR Cigars is available in four sizes. Three sizes were launched in 2014 with the Figurado launched a year later at the 2015 IPCPR Trade Show. Each of the four sizes are packaged in 24 count boxes. 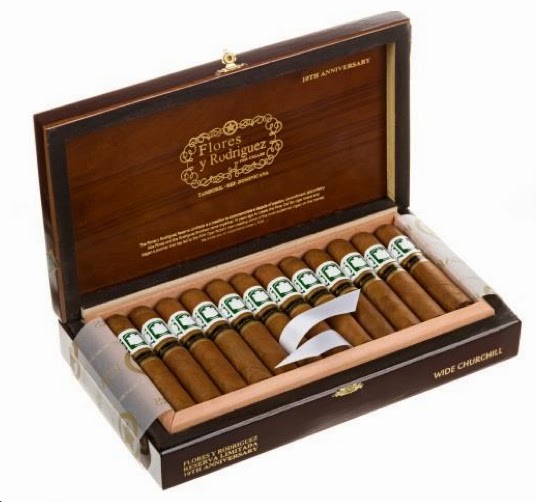 The Ecuadorian Habano wrapper of the FyR 10th Anniversary Robusto has a medium brown color with a slight colorado red tint mixed in. The complexion of the wrapper is somewhat (but not overly) oily. There are some visible veins and a few visible wrapper seams.

There are two bands on the FyR 10th Anniversary cigar. The primary band features a green and white color scheme. On the front of the band features a white shield sitting on a green square background. Over the shield is the text “FLORES Y RODRIGUEZ” in white font arranged in a slightly curved fashion. Below the shield is the text “TAMBORIL” (city where the PDR Cigars Factory in the Dominican Republic is located) – also in a white font arranged in a slightly curved fashion. There are white adornments to the left and right highlighted by three medallions on each side of the band sitting on a green background. The remainder of the band has a thick white trim. The far left of the band has the text “PDR Cigars” along with the PDR star logo in green font arranged in landscape mode.

The secondary band is black with gold trim. The text “Reserva Limitada” is in gold cursive font on the black background.

As I normally do, I started the cigar experience of the FyR 10th Anniversary Robusto with a straight cut. Once the cap was successfully removed, I moved on to the pre-light draw. The dry draw delivered a mix of herbal and floral notes with a slight natural tobacco sweetness. Overall I considered the pre-light draw to the FyR 10th Anniversary Robusto to be satisfactory. At this point, I was ready to light up this cigar and see what the smoking phase would have in store.

The FyR 10th Anniversary Robusto started out with a mix of spices consisting of cedar and a combination of black and white pepper. I also detected some earth and sweet herbal notes. The earth and herbal sweetness quickly became the primary flavors. During the first half, the herbal sweetness exhibited almost a sugar cane quality to it.  Meanwhile the pepper and cedar notes were secondary. The black and white pepper notes were also prominent on the retro-hale.

By the midway point of the FyR 10th Anniversary Robusto, the herbal and earth notes remained primary. The sweetness had diminished, but was not completely out of the picture. At the same time I found both the cedar and pepper notes started to increase on the tongue.

During the last third, I found the cedar notes to be on par with the herbal notes. While the pepper notes also increased, it still was a close background flavor. Meanwhile the earth notes were still present in the background. This is the way the experience of the Flores y Rodriguez 10th Anniversary Reserva Limitada Robusto came to a close. There was no harshness at the end of this cigar. The resulting nub was firm to the touch and cool in temperature.

Overall I found the FyR 10th Anniversary Robusto to score well when it came to its burn. The cigar took a straight burn path. There was a slight jaggedness on the burn line, but this was remedied with some touch-ups and I didn’t find the amount of touch-ups to be excessive. The resulting ash had a very light silvery gray color. The ash itself was on the firm side, but there was some occasional flaking along the way. The FyR Anniversary Robusto had some excellent combustion – maintaining an ideal burn rate and ideal burn temperature.

The draw scored nicely well. The FyR 10th Anniversary Robusto didn’t have a tight draw, but it wasn’t a loose one either. Overall this was a low maintenance cigar to derive flavors from.

In terms of strength and body, the Flores y Rodriguez 10th Anniversary Reserva Limitada Robusto is going to pretty much fall in the medium range. Both attributes increase slightly throughout the cigar experience, but remain in the medium range right until the end. In terms of strength versus body, I found both attributes to balance each other nicely with neither having an advantage over the other.

From a flavor profile, one thing I find is that it comes to cigars that have herbal and spice notes, many are not smooth on my palate. With the Flores y Rodriguez 10th Anniversary Reserva Limitada Robusto, I was surprised how smooth this cigar was. It might sound cliche (and there are obvious comparisons because of the similarity of the band with the Ramon Allones cigar out of Cuba), but this cigar does demonstrate some Cubanesque characteristics when it comes its smoking characteristics. It’s a very different cigar than anything I’ve had out of PDR Cigars – and it also is a very good cigar. This is a cigar I can recommend to either a novice or experienced cigar enthusiast. As for myself, this is a cigar I would smoke again. It’s definitely a box worthy cigar.

* PDR Cigars is a sponsor of Cigar Coop and Stogie Geeks