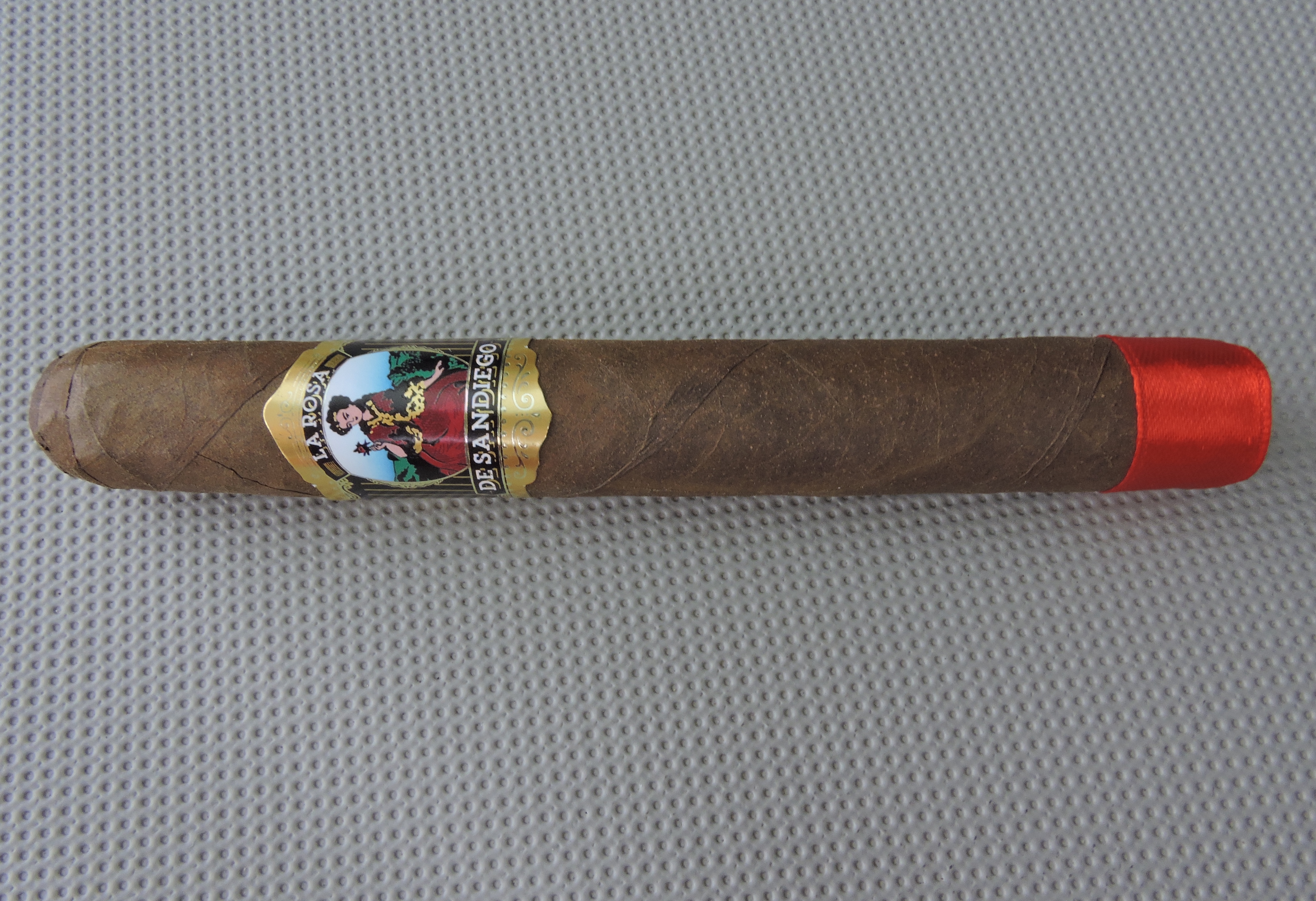 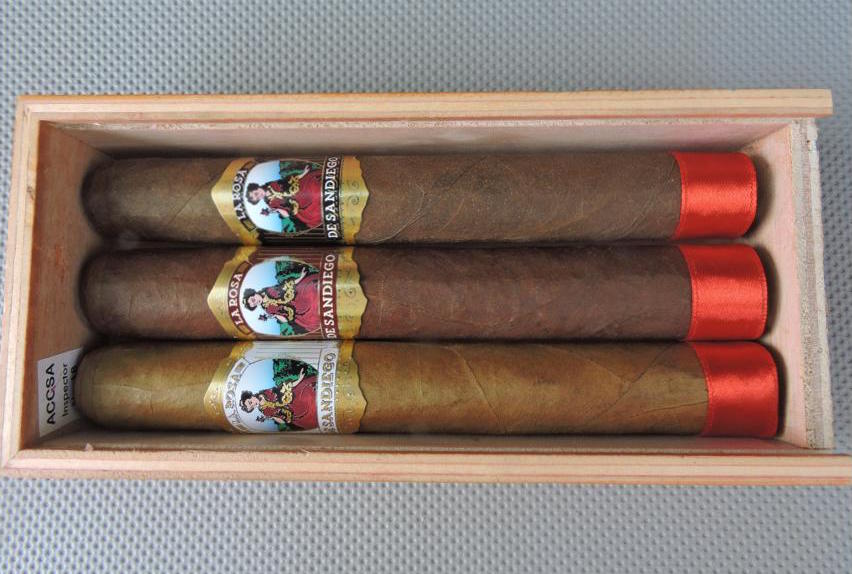 La Rosa de Sandiego derives its name from an area in Cuba called San Diego de Los Banos. This area is located on the western border of the well-known province of Pinar del Rio. The region is famous for its sulfur hot springs, but it also contains soil ideal for tobacco. It was in 1883 when cigar factories began to emerge in the region. It is said that American Caribbean Cigars’ President Damian Tapanes’ paternal lineage is “woven deep in the tradition of cigar making in San Diego de Los Banos.” Now in Esteli, Nicaragua, Tapanes set out with the La Rosa de Sandiego line to create a cigar steeped in Cuban Tradition.

Without further ado, let’s take a closer look at the La Rosa de Sandiego Maduro Toro Gordo and see what this cigar brings to the table.

The La Rosa de Sandiego Maduro was originally launched in three sizes. Recently an 8 x 80 Gigante was added as a fourth size.

As I typically do, I started the cigar experience of the La Rosa de Sandiego Maduro Toro Gordo with a straight cut. Once the cap was clipped, I moved on to the pre-light draw. The dry draw delivered a mix of cocoa and leather. I also detected a slight citrus note and a light tingly spice on the tongue. Overall I considered this to be a satisfactory pre-light draw. At this point I removed the ribbon from the footer, lit up the a Rosa de Sandiego Maduro Toro Gordo, and moved on to the smoking phase.

The La Rosa de Sandiego Maduro Toro Gordo kicked off with notes of cocoa, earth, citrus, and a mix of red and white pepper. The cocoa notes were more prominent on the draw, while the citrus had more of an impact on the after-draw. The earth and pepper notes played more of a secondary role in the background. Meanwhile the red and white pepper combination was prominent on the retro-hale.

As the Toro Gordo moved through the first third the cocoa notes morphed into a creamier chocolate note. The citrus note was now also prominent on the full draw. Meanwhile the earth and pepper notes remained in the background.

By the second half, the primary notes turned more earthy. The citrus and chocolate still made a contribution to the flavor profile, but now as secondary notes. At the same time, there was a slight increase in the pepper notes.

The last third of the La Rosa de Sandiego Maduro Toro Gordo saw the earth and pepper as the main flavors. The chocolate and citrus notes were still present in the background – providing the right amount of sweetness This is the way the Toro Gordo smoked right until the end. The resulting nub was firm to the touch and cool in temperature.

The La Rosa de Sandiego Maduro Toro Gordo was a well-constructed cigar and this reflected nicely on the burn and draw. The burn path remained straight from start to finish. From time to time, there was a slight amount of jaggedness on the burn line, but this proved to be more cosmetic and didn’t warrant many additional touch-ups. The resulting ash was tight and firm with a charcoal gray color. The combustion of this cigar was excellent as the Toro Gordo had an ideal burn rate and ideal burn temperature. 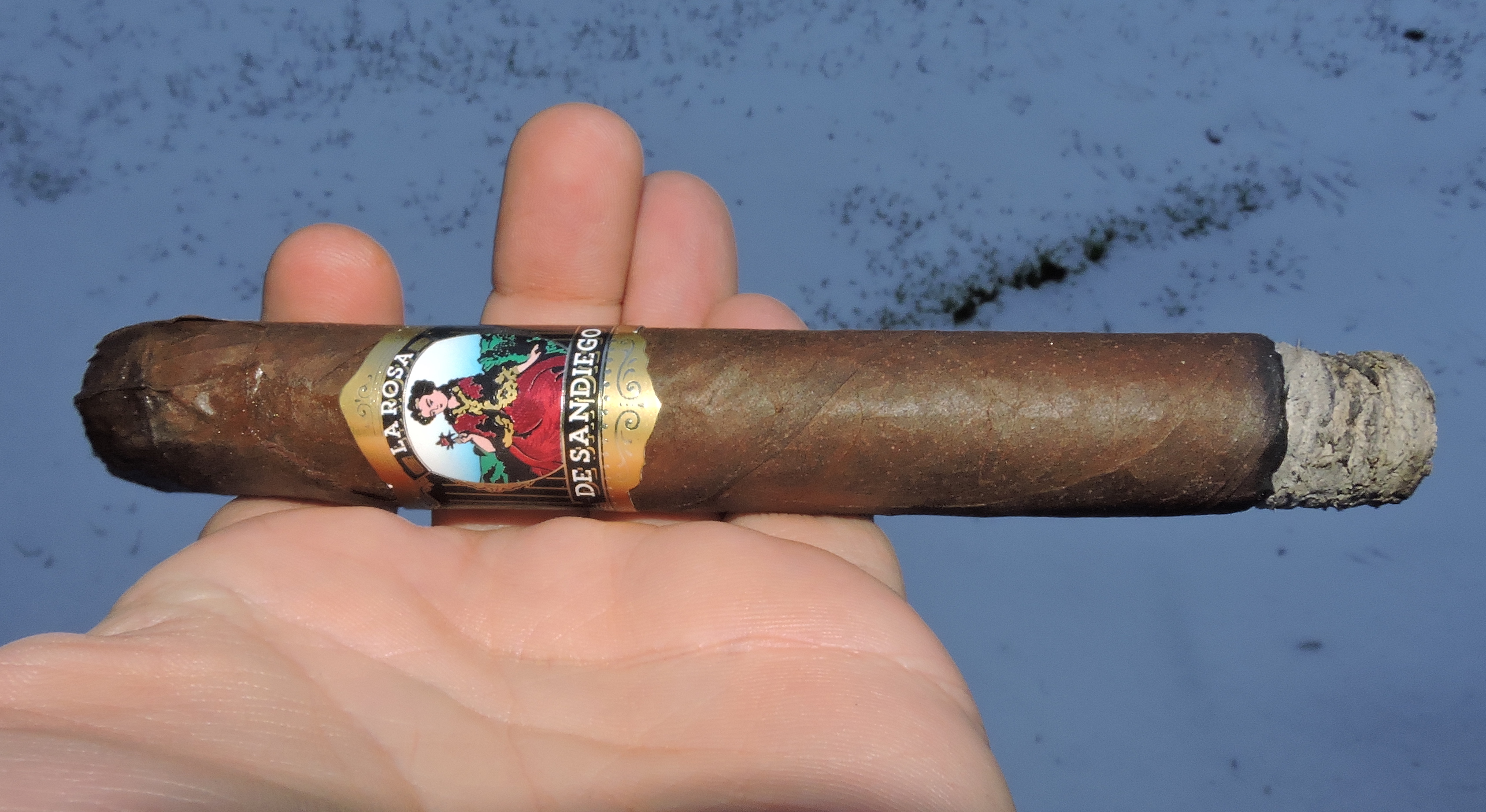 The pack of the La Rosa de Sandiego Maduro Toro Gordo put a touch of resistance on this cigar’s draw. This I consider a positive and it resulted in an ideal draw in my book. Overall, this was made the Toro Gordo an enjoyable cigar to puff on.

The La Rosa de Sandiego Maduro Toro Gordo is not going to be a powerhouse maduro. I found this cigar was medium strength from start to finish. As for the flavors, they started out medium-bodied. As the cigar smoked, I found a gradual increase in body along the way. By the last third, I found the flavors had progressed to medium to full-bodied. In terms of strength versus body, I gave a slight edge to the body.

Back in August, I took a look at the La Rosa de Sandiego Connecticut in the Toro Gordo – and I found it to be a very impressive Connecticut Shade cigar. With the La Rosa de Sandiego Maduro Toro Gordo, I also found it to be an equally impressive cigar. Much like the Connecticut Toro Gordo delivered a classic Connecticut Shade cigar experience, the Maduro Toro Gordo is going to deliver a classic maduro one. I also think this cigar’s medium profile worked perfectly with the flavors delivered. This is a cigar I’d recommend to either a novice or experienced cigar enthusiast. As for myself, this is a cigar I would definitely reach for again – and it’s one worthy of a box split.