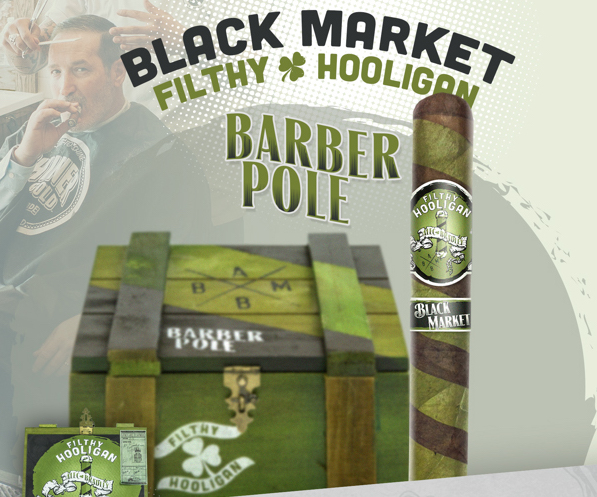 At the 2015 IPCPR Trade Show, Alec Bradley showcased the 2016 edition of its Alec Bradley Black Market line. The Filthy Hooligan was introduced in 2013 as a seasonal candela wrapper offering based on the Alec Bradley Black Market blend. The 2016 release marks the fourth edition of this cigar, but this installment has a very different look than previous years. While the Filthy Hooligan receives new banding, the biggest change is that the blend is being released as a barber-pole featuring both a Candela wrapper from Honduras and a natural wrapper from Nicaragua. The cigar is timed to make it to retailers before the St. Patrick’s Day celebrations, a typical time when many companies release candelas.

At a glance, here is a look at the Alec Bradley Black Market Filthy Hooligan Barber Pole;

The Alec Bradley Black Market Filthy Hooligan Barber Pole is available in one size – a  6 x 50 toro. This is the same size vitola as the previous three installments of the Filthy Hooligan.  The cigars are packaged 22 per box. There is a total production of 2,000 boxes.