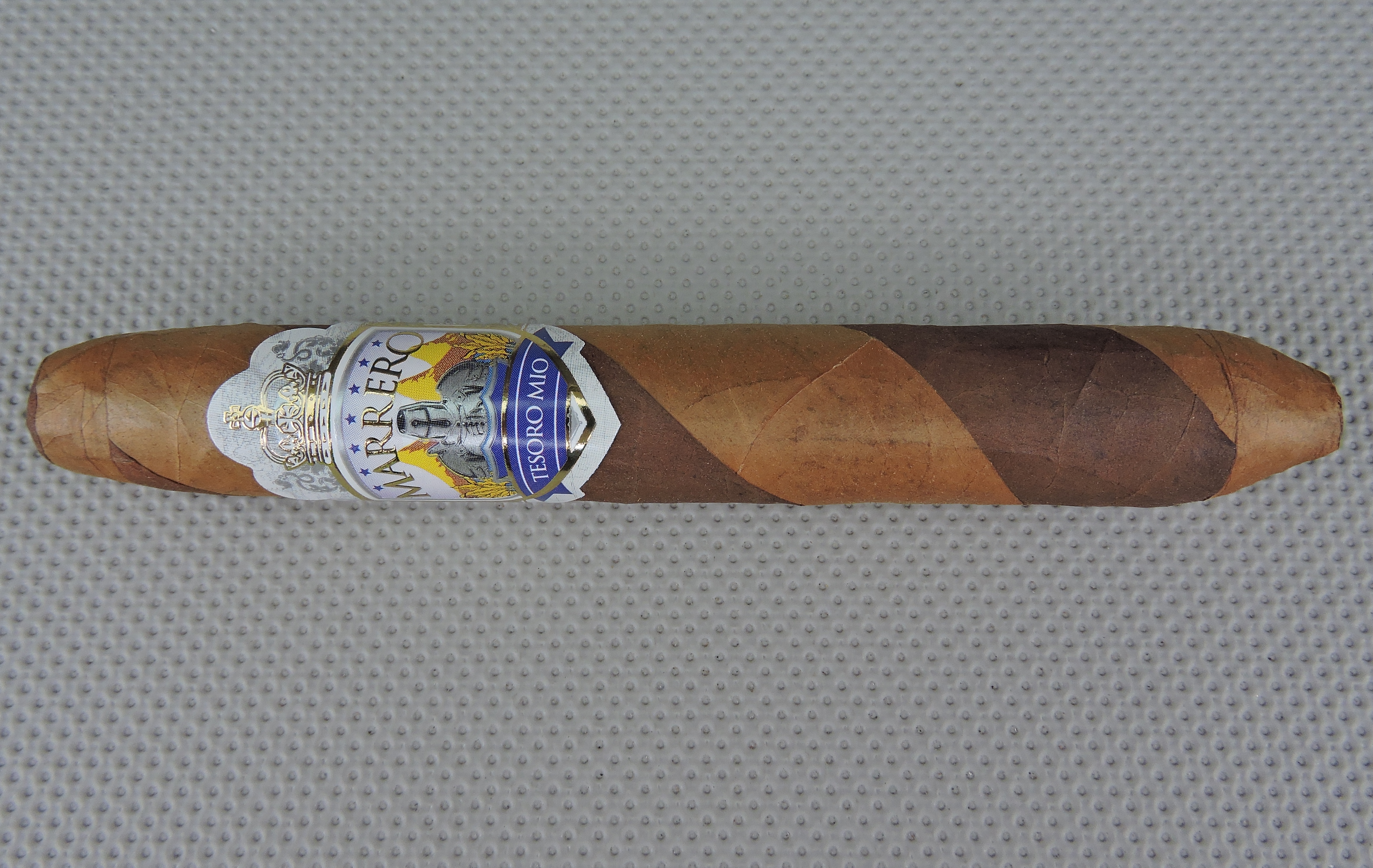 Tabacos de Costa Rica is quietly becoming a factory on the rise. Over the past few years, releases from Bombay Tobak and LH Cigars have landed on the Cigar Coop Cigar of the Year Countdown. Brands such as Atabey, Byron, Brun del Ré, Xiphos and Cuba Rica have also come out of this factory.

Without further ado, let’s break down the Marrero Tesoro Mio Barberpole Perfecto and see what this cigar brings to the table.

The blend to the Marrero Tesoro Mio Barberpole is a multi-national one. In addition to the Ecuadorian Connecticut and Habano barberpole, the blend is also highlighted by Peruvian tobacco, a tobacco used in many blends coming out of Tabacos de Costa Rica.

The combination of the Ecuadorian Connecticut and Habano wrappers on the Marrero Tesoro Mio Barberpole Perfecto deliver a nice contrast of light and medium brown colors. The seams on the barberpole are neatly arranged. The wrappers had a light coating of oil. While this cigar had some visible veins, it had a smooth surface. The footer is open with a small nozzle tip. There is a slight taper with a rounded cap at the tip of the cigar.

I opted to go with a straight cut to remove the cap of the Marrero Tesoro Mio Barberpole. I used a regular straight cut as opposed to the Credo Special T cutter that I normally use for figurado vitola. I opted to make a thin cut to maximize the tapering of the perfecto. Once the cap was removed, I proceeded with the pre-light draw. On the cold draw, I detected notes of cream, coffee, and cedar. Overall, I considered this to be an excellent pre-light draw. At this point, I was ready to light up the Tesoro Mio Barberpole and see what the smoking experience would yield.

The Marrero Tesoro Mio Barberpole Perfecto started out with notes of cream, coffee, and cedar. There also was a slight herbal note in the equation. As the cigar burned through the tapered nozzle, the cream notes remained primary with the other flavors in the background. Meanwhile, there was a mild cedar note on the retro-hale.

Once the Tesoro Mio Barberpole Perfecto reached the main base of the cigar, the coffee notes emerged as the primary flavor. The cream notes joined the cedar and herbal notes in the background. As the cigar moved though the second third, the coffee notes remained in control. There was an increase in herbal notes and a decrease in the cream notes. Toward the second half, the cedar notes also increased in intensity on both the tongue and retro-hale.

Construction-wise, the Tesoro Mio Barberpole Perfecto is rock-solid, and this was reflected on the burn and draw. There was a slight curvature on the burn line early on, but then the cigar maintained a straight burn line and followed a straight burn path for the remainder of the smoke. The cigar had a firm ash with a salt and pepper color. The burn rate and burn temperature were both ideal. 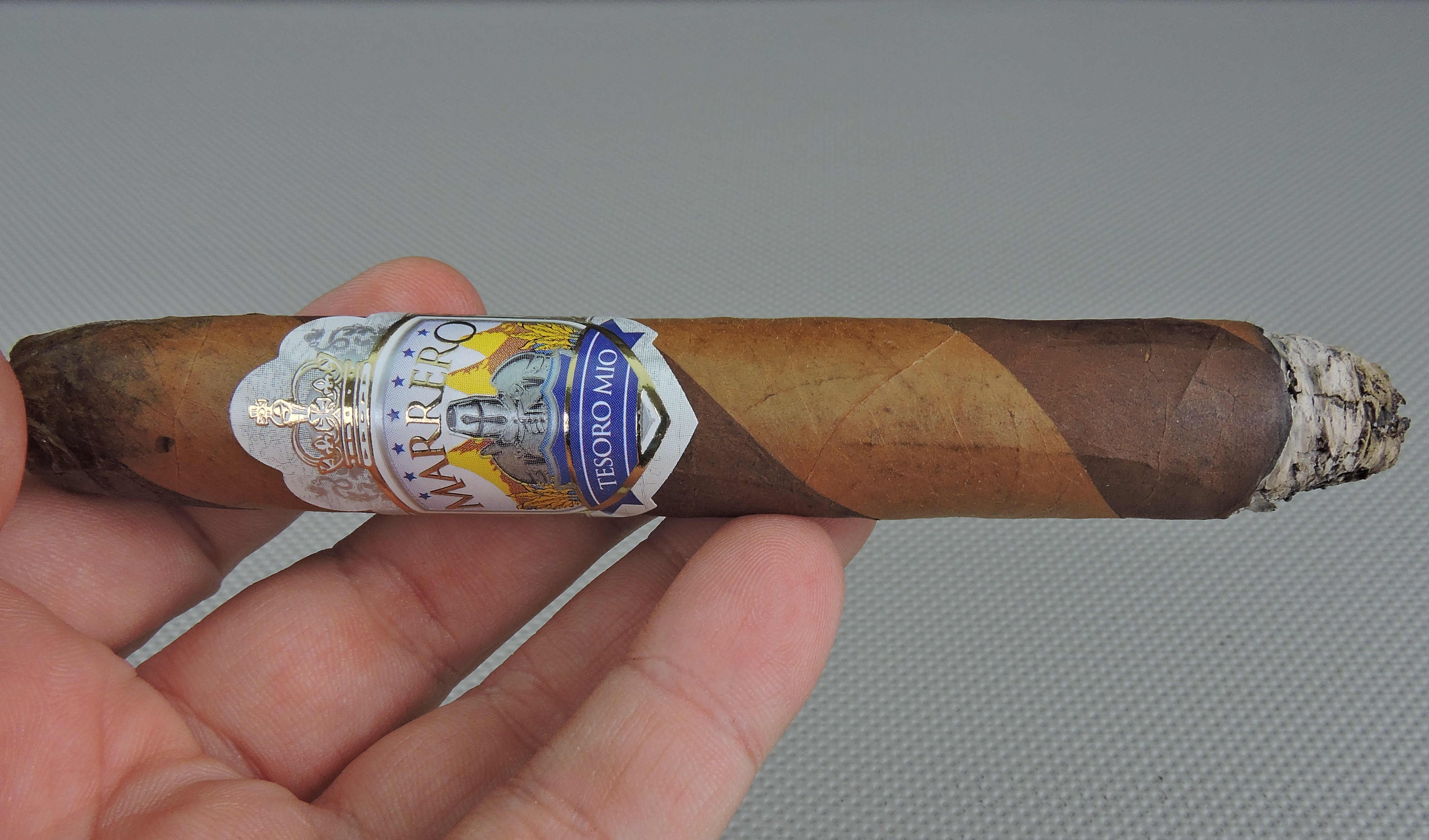 I found the draw also to be excellent for a perfecto. The tapered area where I clipped a near-minimal amount of cap allowed for a smooth draw. This made the Tesoro Mio Barberpole Perfecto to be an enjoyable cigar.

The Tesoro Mio Barberpole Perfecto started out dialed-back, but increases in intensity as the smoking experience progressed. The opening stages of this cigar started out with mild strength. By the time the cigar reached the midway point, the strength level increased to mild to medium and by the midway point it reached medium.

Overall, I found the body to maintain a slight edge over the strength – particularly in the second half.

I’m a fan of barber-pole cigars, but many of them fall short in terms of expectations. This was not the case with the Marrero Tesoro Mio Barberpole Perfecto. While brands such as Camacho have released barber-pole figurados, this is still not a common format/vitola. I liked the perfecto format for this blend, and I liked the flavors produced. It’s another example out of an excellent blend out of Tabacos de Costa Rica.

Given this is not a powerful cigar, this is a cigar I could recommend to a novice or experienced cigar enthusiast. At under $7.50 per cigar, it’s a nice value. It’s a cigar I’d smoke again – and it’s worthy of a box split.

Note: Marrero Cigars using the spelling “barberpole” for this release.