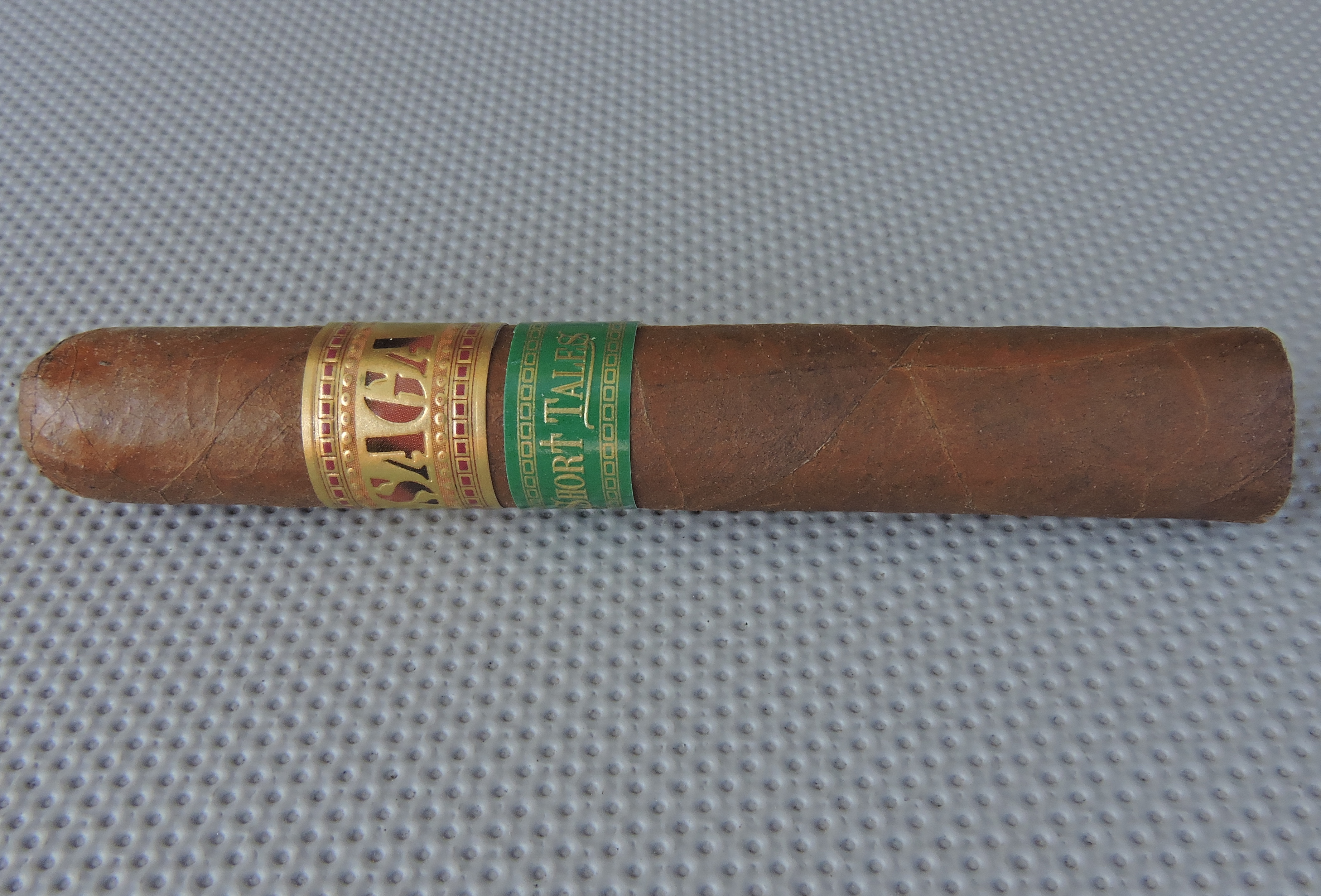 Saga Short Tales is a series by De Los Reyes Cigars that focuses on smaller, short-sized smokes. The series consists of ten unique blends, each in a different size with a different theme. De Los Reyes cigars is owned by the Reyes family, which has 160 plus years experience over six generations in all aspects of the cigar industry – including tobacco-growing, leaf brokerage, and cigar production. The themes in the Short Tales series each pay homage to a different aspect related to tobacco and cigar making. At this year’s IPCPR Trade Show De Los Reyes showcased Volumes 3 to 5 (each referred to as a “Toro”). Today we take a look at “Tomo III”of Short Tales dubbed L.I.V. L.I.V. is an acronym for Labor Ipse Voluptas – which is Latin for “the pleasure of the work itself”. Overall, I have been highly impressed with what I have smoked from the Saga Short Tales series, and Saga Short Tales Tomo III L.I.V. does not disappoint.

The first two volumes used titles “Tales of”. The next three volumes took a Latin theme for its titles. There was a common denominator of Piloto Cubano tobacco in each blend.  Each volume incorporates packaging which is designed in the form of a classic novel – complete with a “story” of the cigar included. 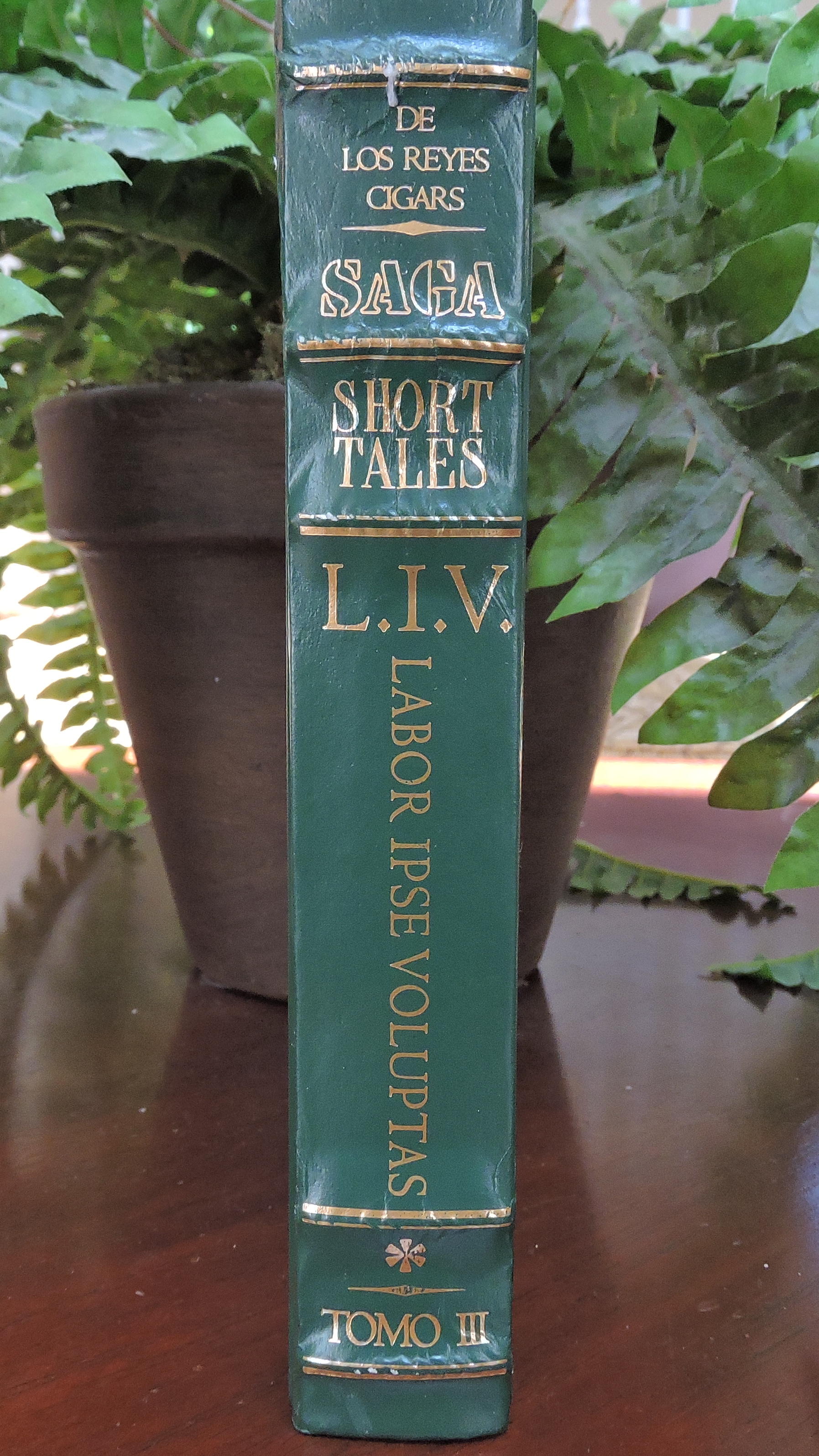 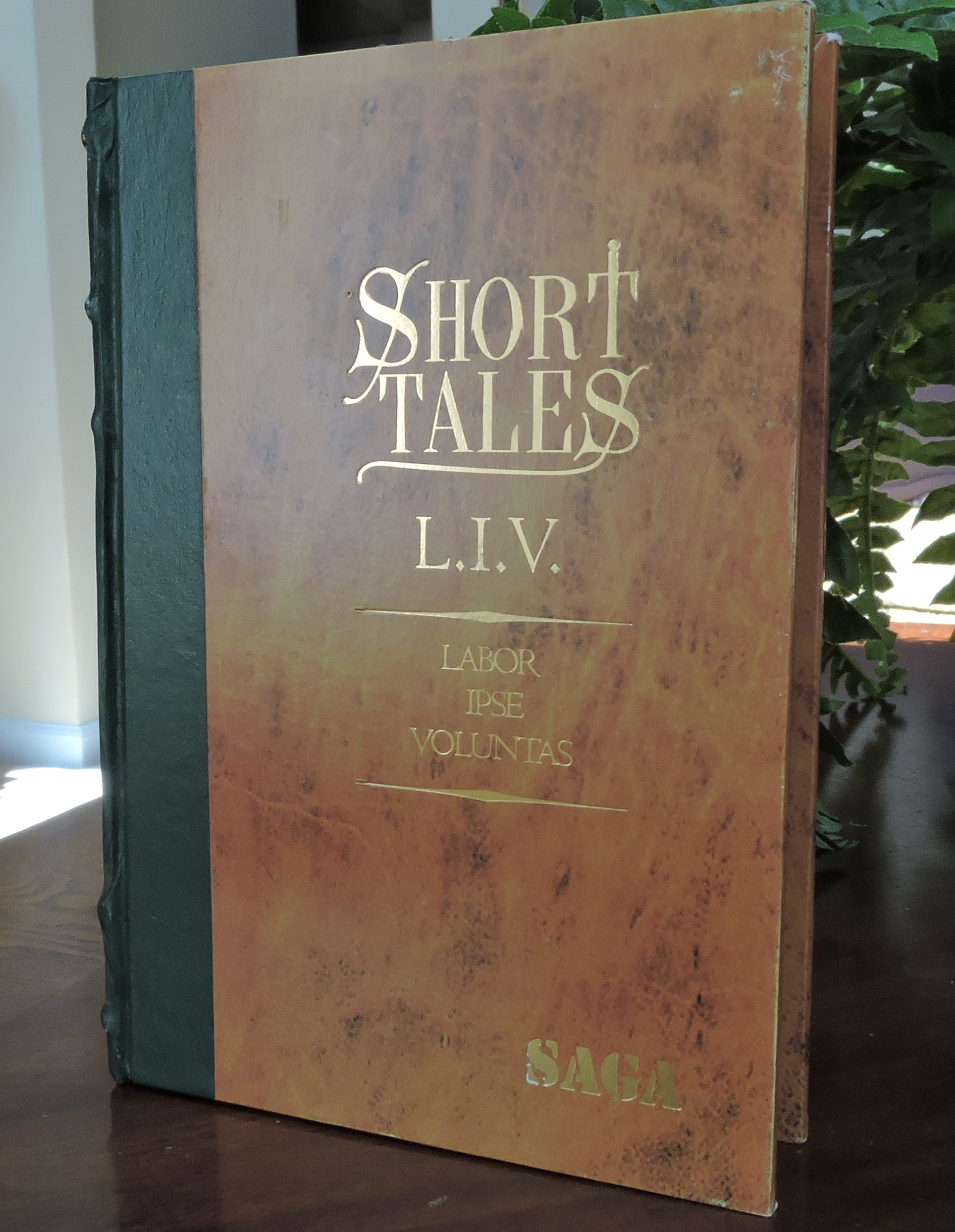 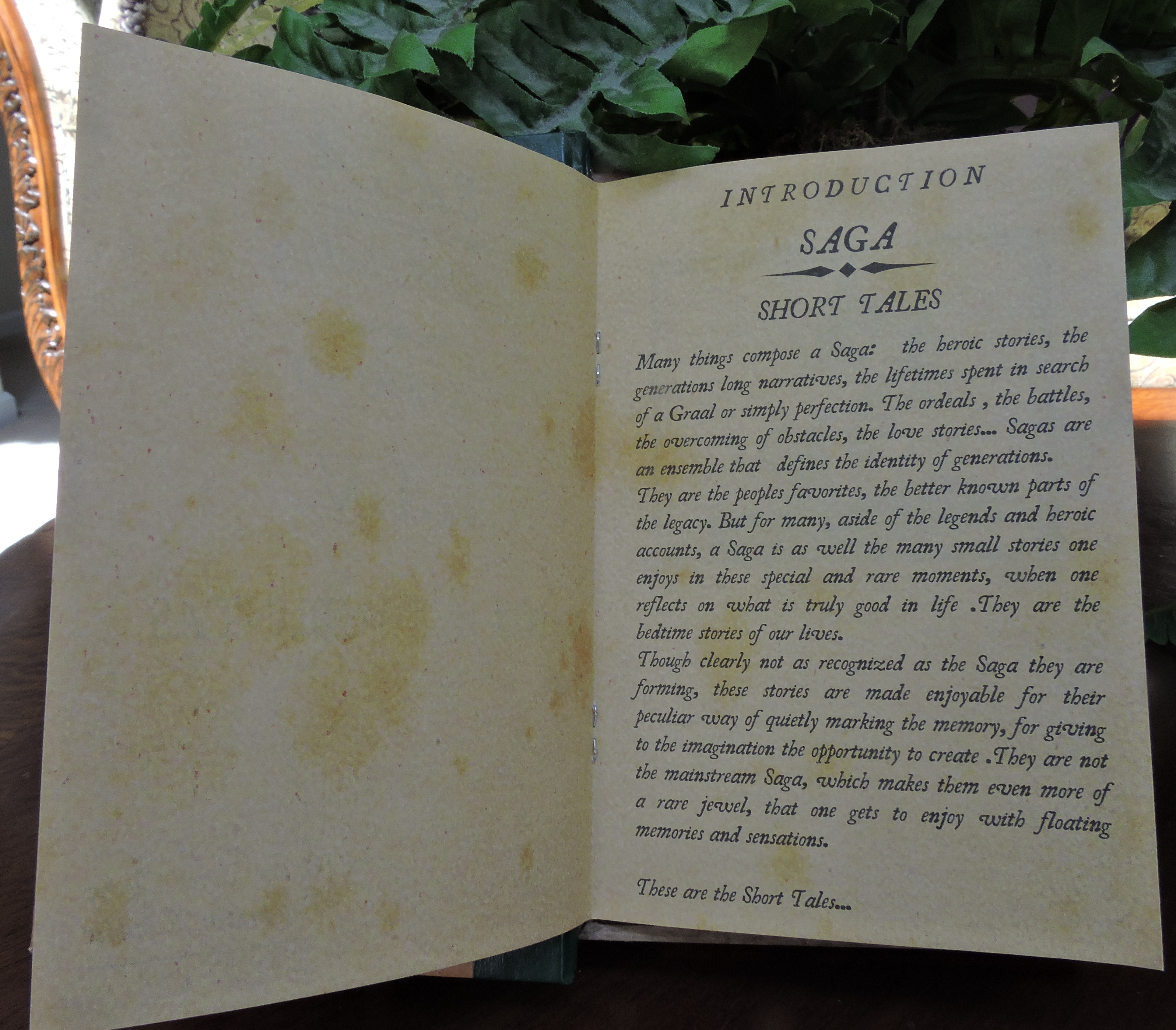 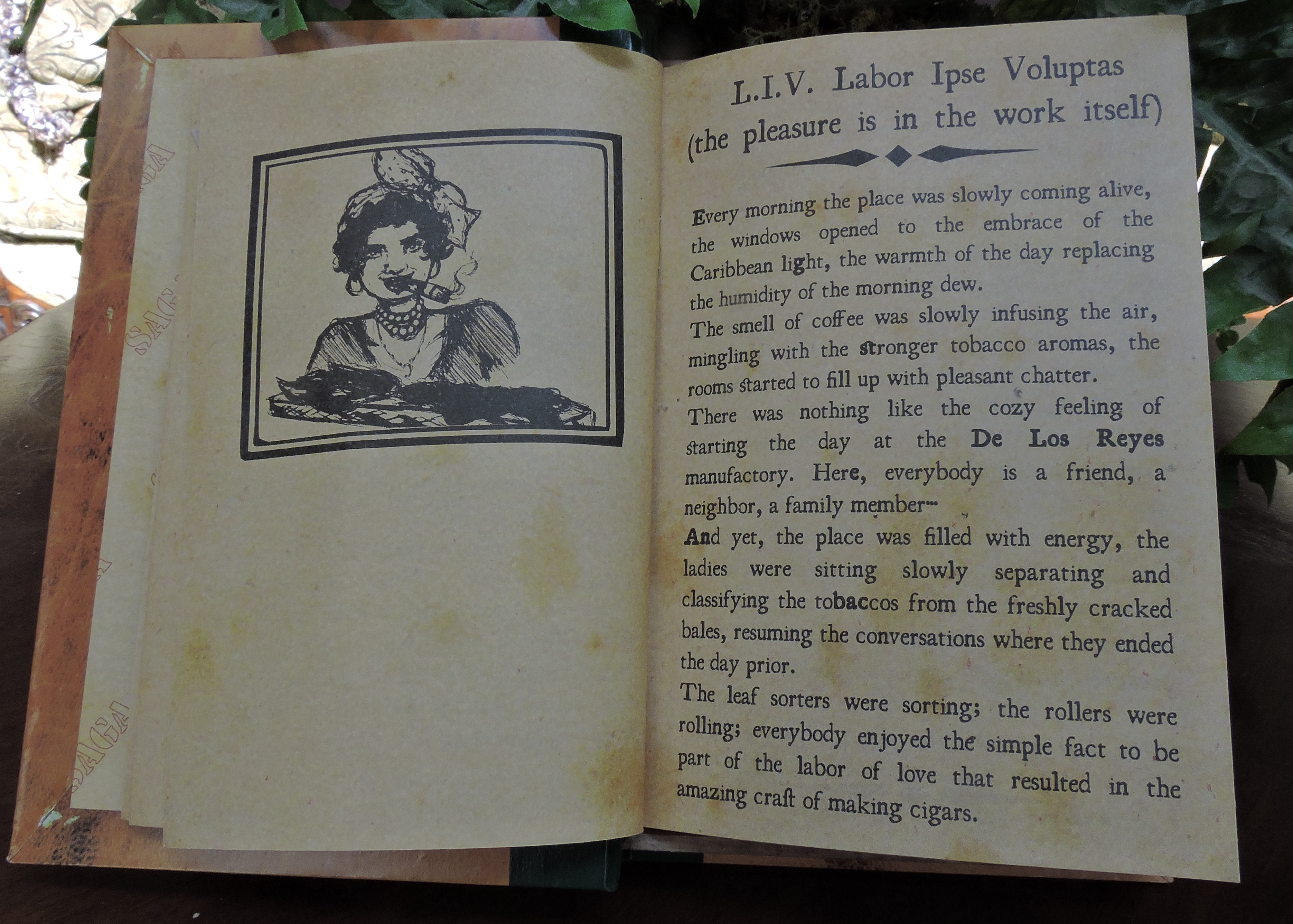 Without further ado, let’s break down the Saga Short Tales Tomo III – L.I.V cigar and see what this cigar brings to the table. 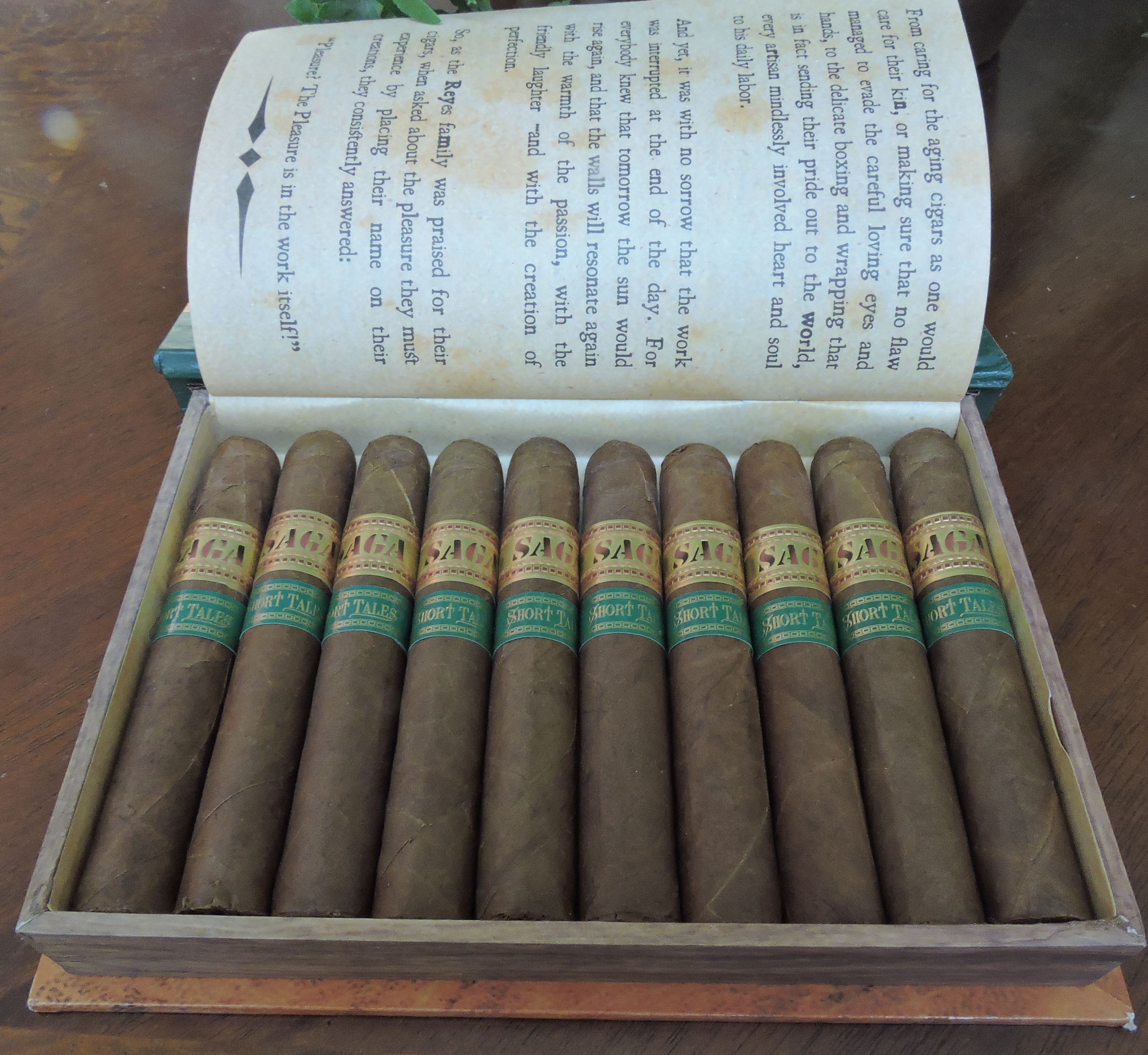 The Ecuadorian Habano wrapper has a medium brown color to it with a strong rosado tint.There is some oil on the surface of the wrapper. I found this wrapper on the smoother side. The wrapper has some visible veins, but the wrapper seams are well hidden. 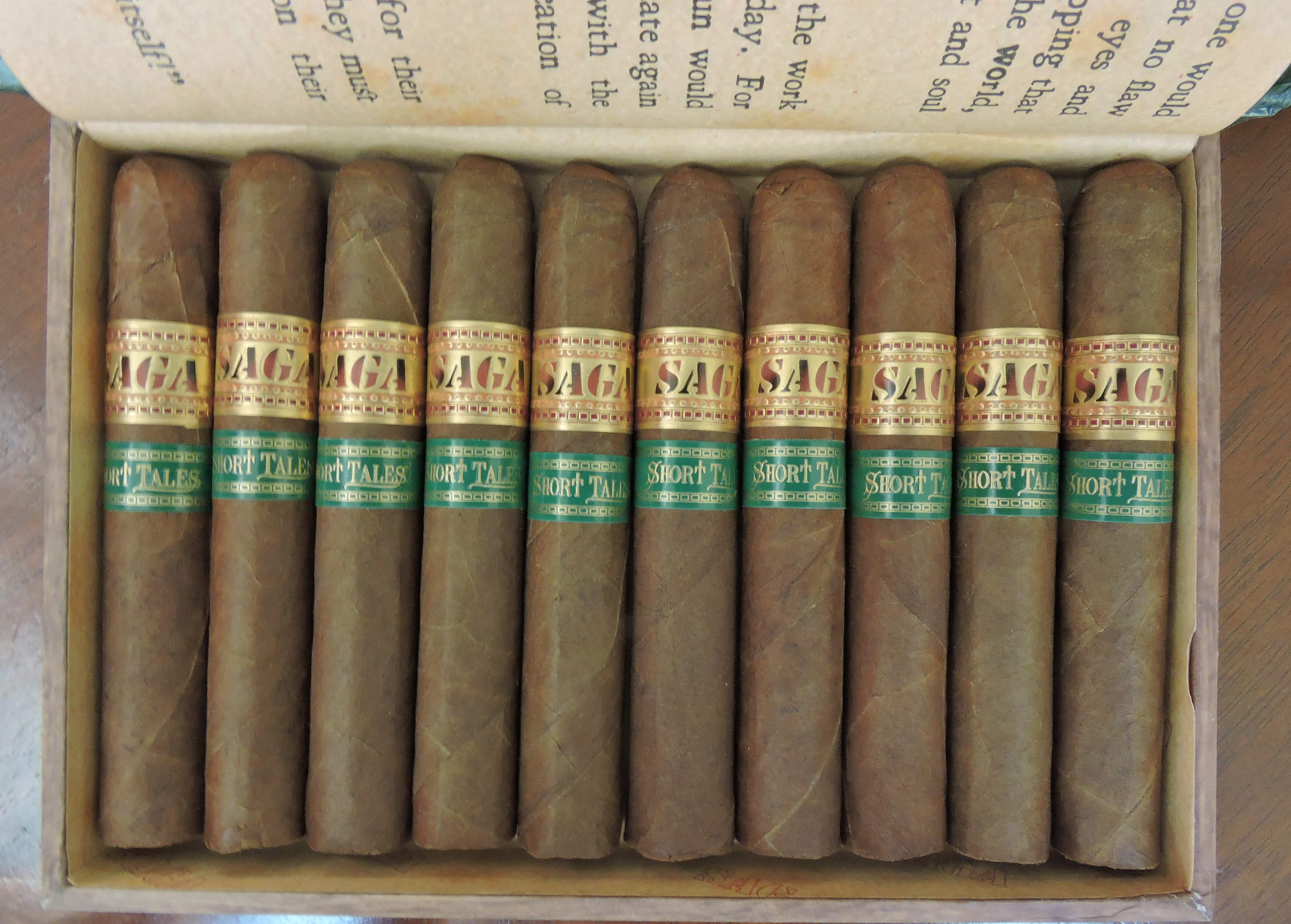 There are two bands on the Saga Short Tales L.I.V.. These are the same bands found on the Tales of High Priming release. The primary band is gold in color. Prominently displayed on the middle of the band is the text “SAGA” in a modern red-colored font. Above and below the text is a row of a gold rivet-like design. There is also a row of red rivets toward the top and bottom of the band.

I opted for my usual choice of a straight cut to commence the cigar experience of the Saga Short Tales L.I.V.. Once the cap was removed, I proceeded with the pre-light draw. The dry draw delivered notes of slightly sweet natural tobacco and a subtle tingly spice on the tongue. Overall I found this to be a satisfactory pre-light experience. At this point, I was ready to light up the Saga Short Tales L.I.V. and see what the smoking phase would have in store.

The Saga Short Tales L.I.V. began with a mix of natural tobacco, floral, and woody notes As the cigar moved through the early stages, the natural notes became primary. These natural tobacco notes had a nice component of sweetness. The wood notes became secondary and were joined by some black pepper notes. This wood/pepper combination was something I also detected on the retro-hale. Meanwhile, the floral notes that were present on the tongue early on dissipated.

Later in the first third of the L.I.V., the woody notes started floating between the forefront and background. During this stage, the natural tobacco notes shed some of the sweetness they had earlier on. By the midway point of the cigar experience, a dusty earth surfaced and took control as the primary note. Meanwhile, there still were some light pepper notes in the background.

The last third oof the L.I.V. delivered a combination of wood and earth notes. There was still enough sweetness from the natural tobacco and spice from the pepper to keep the flavor profile balanced. This is the way the cigar experience came to a close. The resulting nub was cool in temperature and slightly soft to the touch.

The Saga Short Tales L.I.V. had no problem maintaining a straight burn path. There was an occasional bit of jaggedness on the burn line, but overall I found this more cosmetic than problematic. The resulting ash had a salt and pepper complexion. This was an ash on the firmer side that came off the cigar in clean chunks. As for the burn rate and burn temperature, both were ideal. 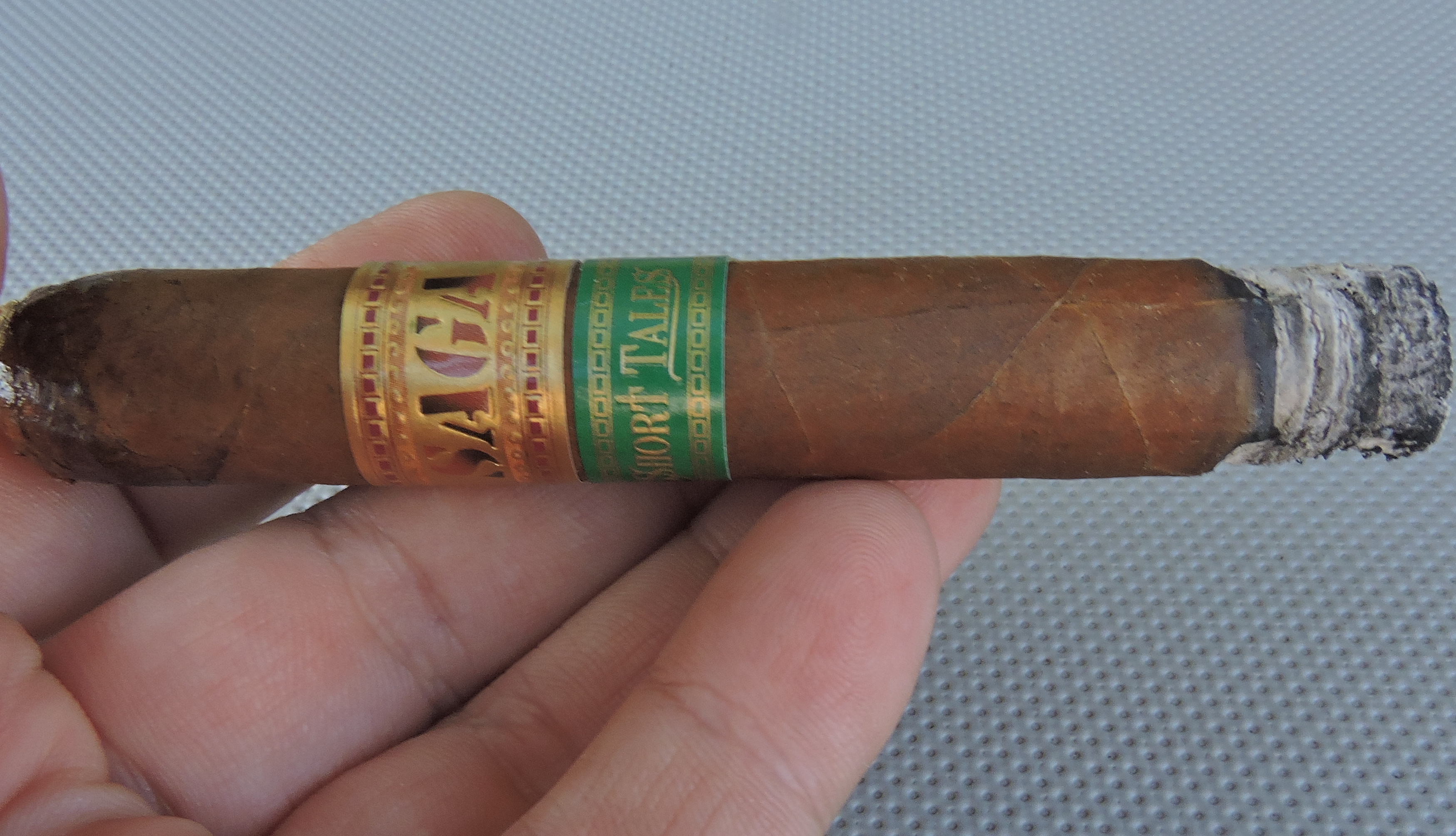 The draw to the Saga Short Tales L.I.V. also performed well. It was not too tight, nor was it too loose. In the end, this was a low maintenance cigar to derive flavor from.

Overall I found the Saga Short Tales L.I.V. to be a medium strength, medium-bodied smoke. Along the way, I found there was a slight increase in intensity in both attributes, but as the smoking experience of the L.I.V. came to a close I found this cigar remained in the medium range for strength and body.

In terms of strength versus body, I found both attributes to balance each other well with neither one overshadowing the other.

This is the third installment of the Saga Short Tales series I have smoked, and De Los Reyes is now 3 for 3 in delivering an excellent smoking experience with this line. While I am more of a fan of the longer smoking experience than a shorter smoke, I have been quite impressed with what this line has to deliver. In each of the first three volumes, the blend seems to also fit the size of the cigar quite well.  This is a cigar I could recommend to a novice or experienced cigar enthusiast. As for myself, this is a cigar that I would reach for and smoke again – and pick up a box.