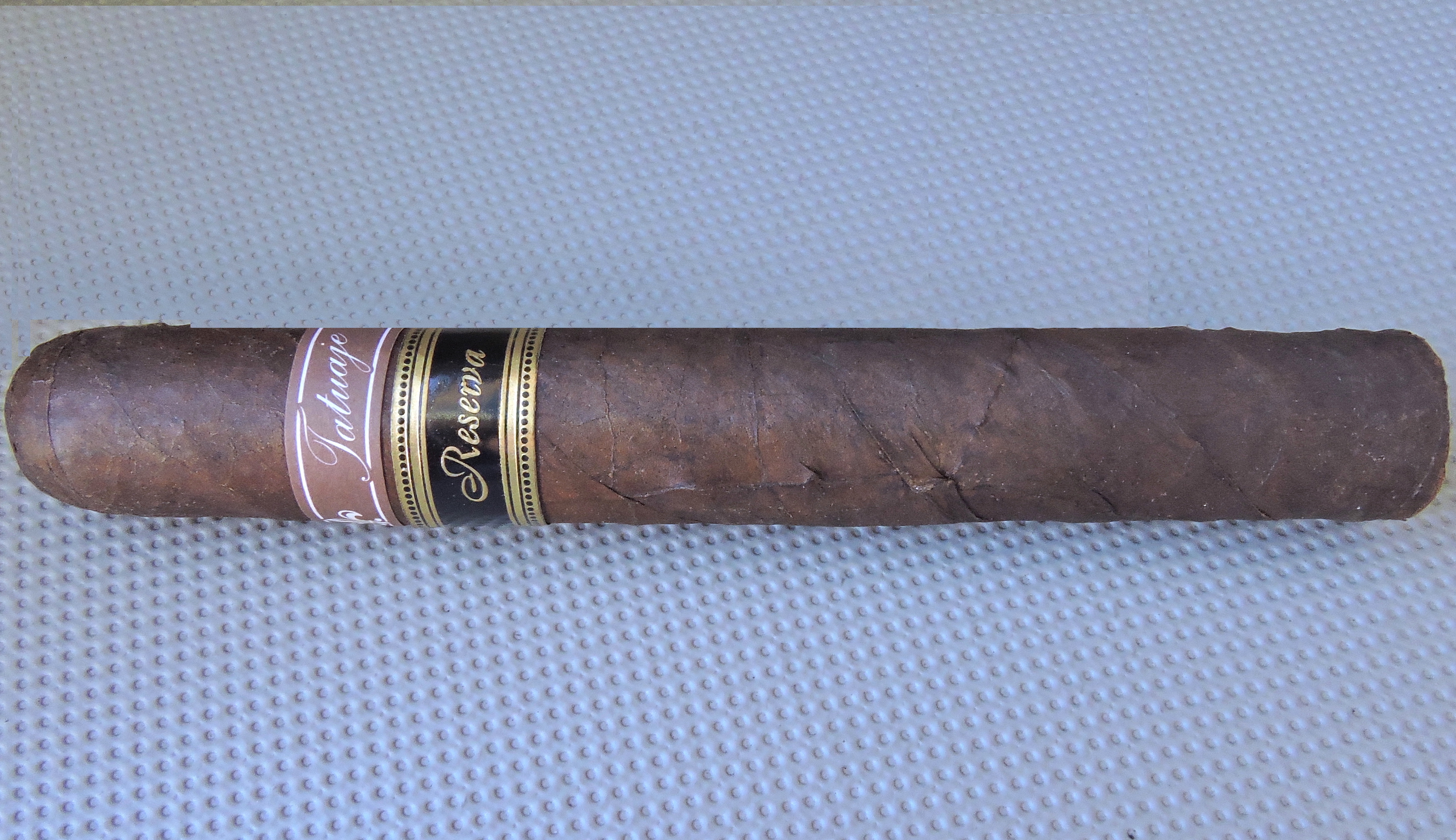 In 2016, Tatuaje Cigars’ owner Pete Johnson introduced a new cigar under the Tatuaje Reserva line called the Tatuaje Reserva K222. The K222 pays homage to Johnson’s late Rottweiler named Kona. The K222 name is derived from the “K” in Kona combined with the time he passed away (2:22 pm) on April 26, 2015. The blend is a combination of two other popular Tatuaje cigars under the Reserva line, the Tatuaje Cojonu 2003 and Tatuaje J21. It is a cigar that is produced in Miami and this particular blend has been released in one size – a 5 7/8 x 52 toro. The K222 is an ongoing offering by Tatuaje, but is produced in limited quantities. While Kona was the name of Johnson’s dog, it also is the name of a district located on the west coast of the Big Island of Hawaii. Given this connection, it was appropriate that Johnson launched the cigar at Fujioka’s Wine Times located in Honolulu (on the island of Oahu) in Hawaii back on April 23, 2016.

Over the years, the Tatuaje Reserva line has served as a series of off-shoot brands from the Tatuaje Seleccion de Cazador (Brown Label) line. Like the original Selection de Cazador line, some of the blends utilize an Ecuadorian Habano wrapper while others have used a Connecticut Broadleaf wrapper. The Connecticut Broadleaf Reserva blends are produced out of the My Father Cigars’ factory in Estelí, Nicaragua while the Ecuadorian Habano blends come out of My Father Cigars’ small boutique factory located in Doral, Florida. The K222 is one of the Miami-made blends. For many years, both the Miami and Nicaraguan Reserva blends had the same secondary band with the “Reserva” name on it. Recently, Johnson has made a change adding the name “Broadleaf” to the Reserva blends coming out of Nicaragua to distinguish the two.

There is a K222 Reserva Broadleaf counterpart. This first was released as a part of Tatuaje’s Broadleaf Collection. However, today the focus will be on the Ecuadorian Habano Tatuaje Reserva K222 blend.

The K222 is a combination of the Cojonu 2003 and J21 blends. Like those two blends, the K222 utilizes an Ecuadorian Habano wrapper over Nicaraguan binder and filler.

As mentioned above, the K222 is a tToro-sized vitola. It is packaged in 25-count cabinet style boxes.

The Ecuadorian Habano wrapper of the Tatuaje K222 had a chocolate brown color to it. There wasn’t much in the way of oil on the surface of the wrapper. The wrapper had some visible wrapper seams. There were also some visible veins that gave the wrapper a slightly toothy appearance.

The primary band is the same band found across all Tatuaje Selection de Cazador and Tatuaje Reserva cigars. It is brown with a white pinstripe across the top and bottom. The text “Tatuaje” is in the center of the band in white cursive font. The text is surrounded on the left and right side by a series of fleur-de-lis logos.

I commenced my experience with the Tatuaje Reserva K222 by placing a straight cut into the cap of the cigar. Once the cap was removed, I proceeded with the pre-light draw. The dry draw of the K222 delivered a mix of leather, cocoa, and a slight sour note. Overall this wasn’t the most exciting pre-light draw, but since the pre-light draw is not factored into the overall score, there was no loss of points here. At this point, I was ready to light up the Tatuaje Reserva K22 and see what the smoking phase would have in store.

The Tatuaje Reserva K222 started out with notes of earth, unsweetened cocoa, and a citrus/red pepper combination that formed what I term a classic “twang”. During the early stages the earth and twang were prominent in the forefront. The cocoa notes receded into the background. Meanwhile, the red pepper was still quite prominent on the retro-hale.

As the smoking experience of the K222 progressed through the first half, the twang and earth notes remained in the forefront. While the cocoa notes remained mostly in the background, there were some points where they surfaced briefly in the forefront. As the K222 reached the second third, the cocoa note also had a nut flavored component to it. It was also at this point where the twang note started to diminish.

By the time the K222 reached the second half, the cocoa/nut combination joined the earth in the forefront. By this point, the twang broke apart with the red pepper and citrus notes becoming more separate and distinct. The pepper increased into the last third, but never overtook the earth and cocoa/nut combination in the forefront. This is the way the Tatuaje Reserva K222 came to a close. The resulting nub was cool in temperature, but slightly soft to the touch.

The burn of the Tatuaje Reserva K222 had some jaggedness along the way. For the most part, this was cosmetic as the cigar didn’t have a problem maintaining a straight burn path. The jaggedness was easily remedied with some touch-ups and I didn’t find the number of touch-ups to be excessive. The resulting ash was firm with a silver-gray color to it. Meanwhile, the burn rate and burn temperature were both ideal. 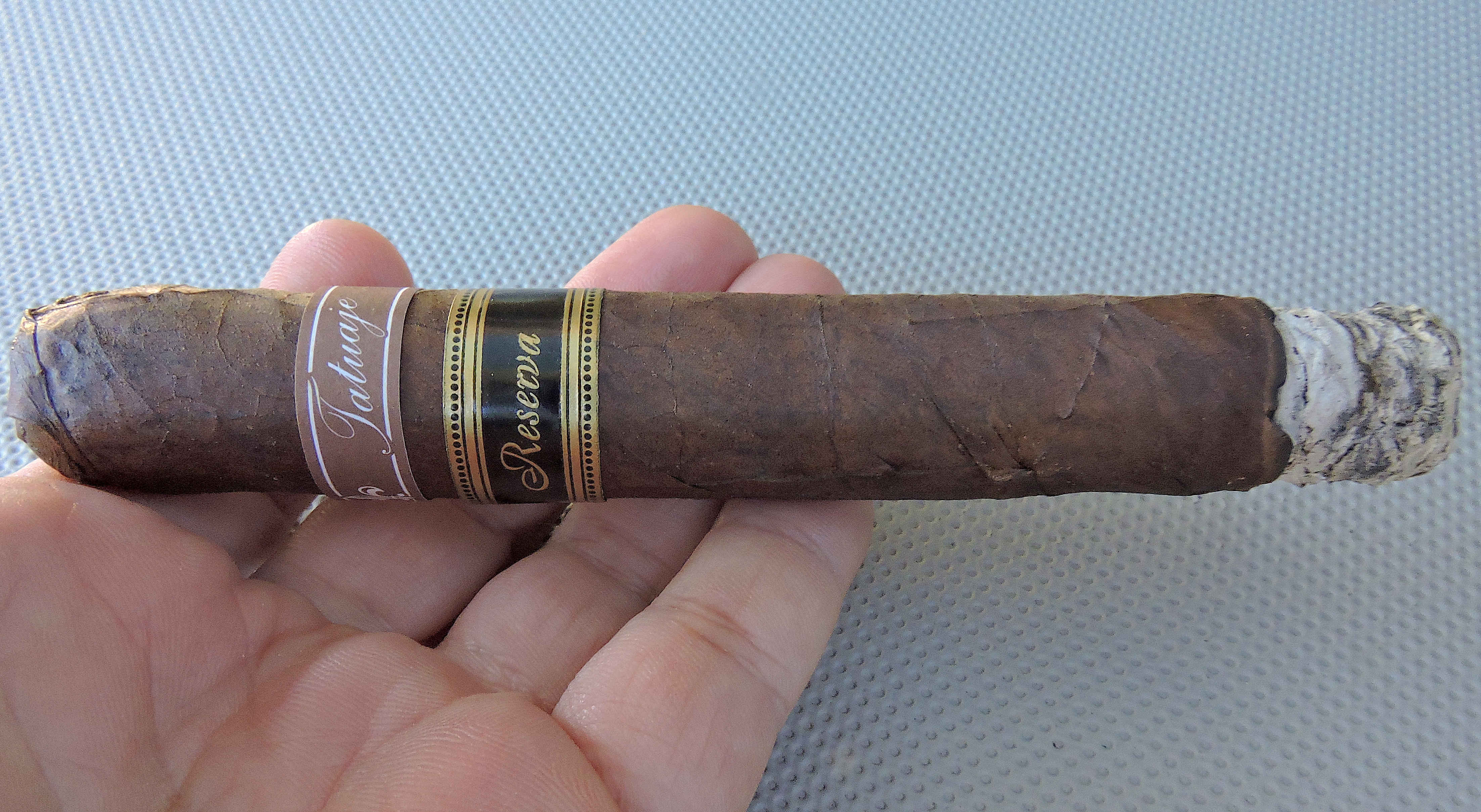 Burn of the Tatuaje Reserva K222

The draw to the K222 seemed to have a slight resistance to it – which is something I deem a positive. At the same time, this was a cigar that produced ample amounts of smoke.

Overall, I found the Tatuaje Reserva K222 to be a cigar that was on the bold side. This was a cigar that was medium to full in strength and full-bodied. I didn’t find much variance in the intensity levels of the strength and body during the smoking experience. In terms of strength versus body, I gave a slight edge to the body.

Based on the pre-light draw, and the early stages, I didn’t find the K222 to my liking. However, as the smoking experience progressed and some of the cocoa notes became more prominent, I did find myself enjoying this cigar. Given this is a cigar that is on the bolder side in terms of strength and body, it’s a cigar I would suggest to a more seasoned cigar enthusiast who enjoys a cigar with that profile.

Given this is a cigar that is made in Miami, it carries a higher price point ($14.00). While this cigar did come around for me, there are other Tatuaje Reserva cigars with a more competitive price point that I would reach for first. It’s certainly a cigar that comes with a buy recommendation, but I’d recommend starting with one cigar.