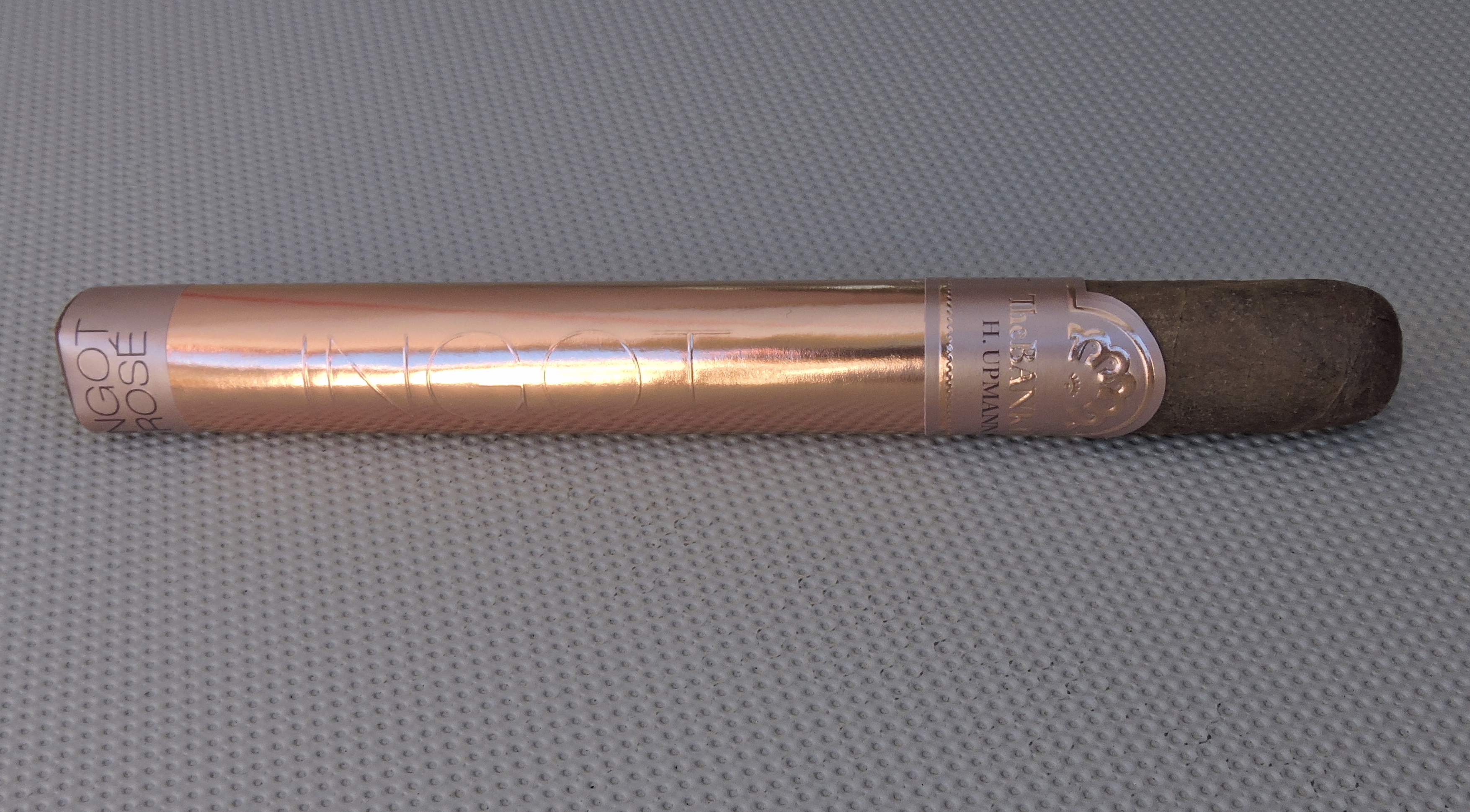 Without further ado, let’s take a closer look at the H. Upmann Banker Ingot Rosé and see what this cigar brings to the table.

The H. Upmann Banker Ingot Rosé features a five-country multi-national blend highlighted by the use of a Cameroon wrapper.

The H. Upmann Banker Ingot Rosé is available in a Churchill size. It is packaged in 12-count boxes. 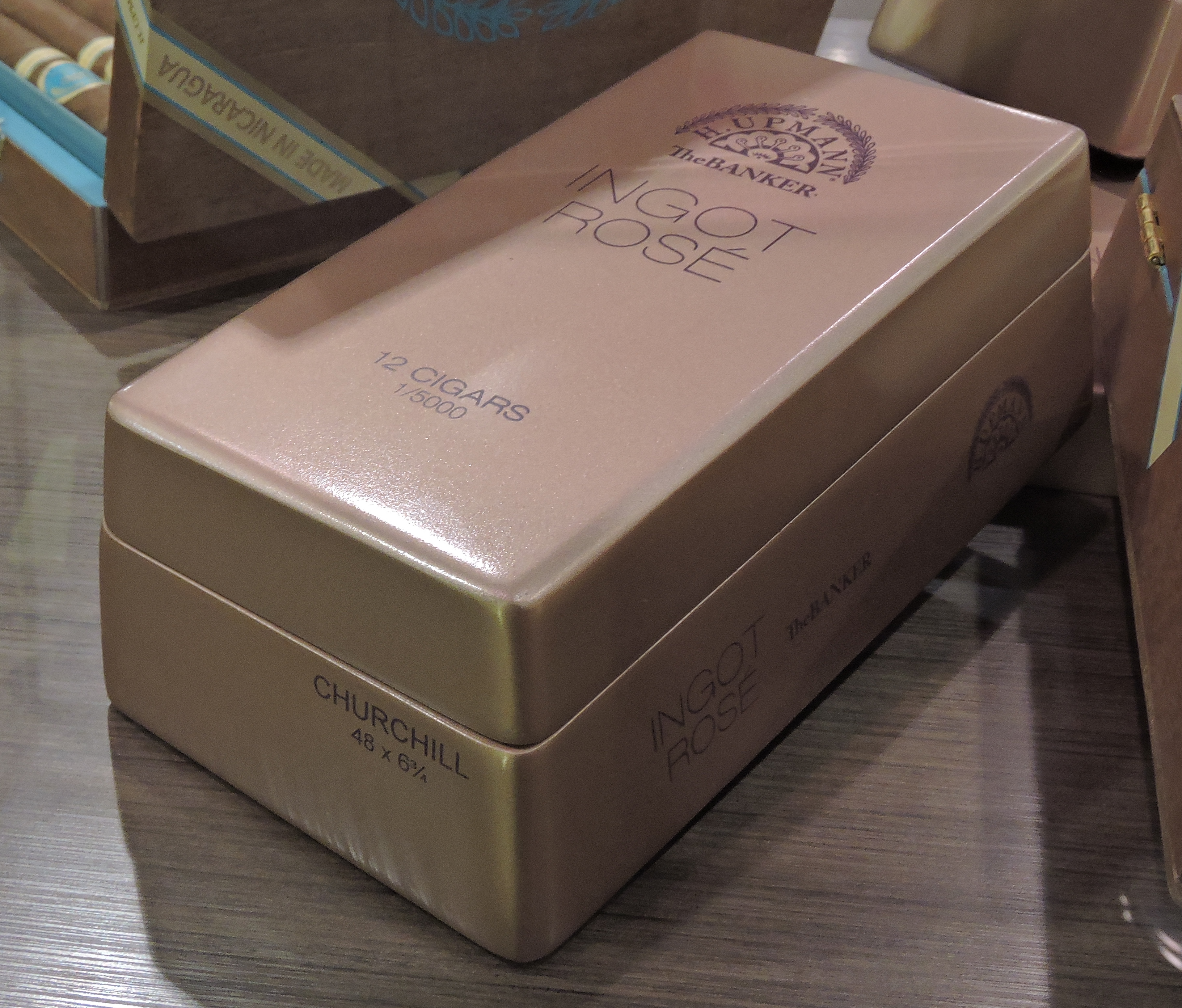 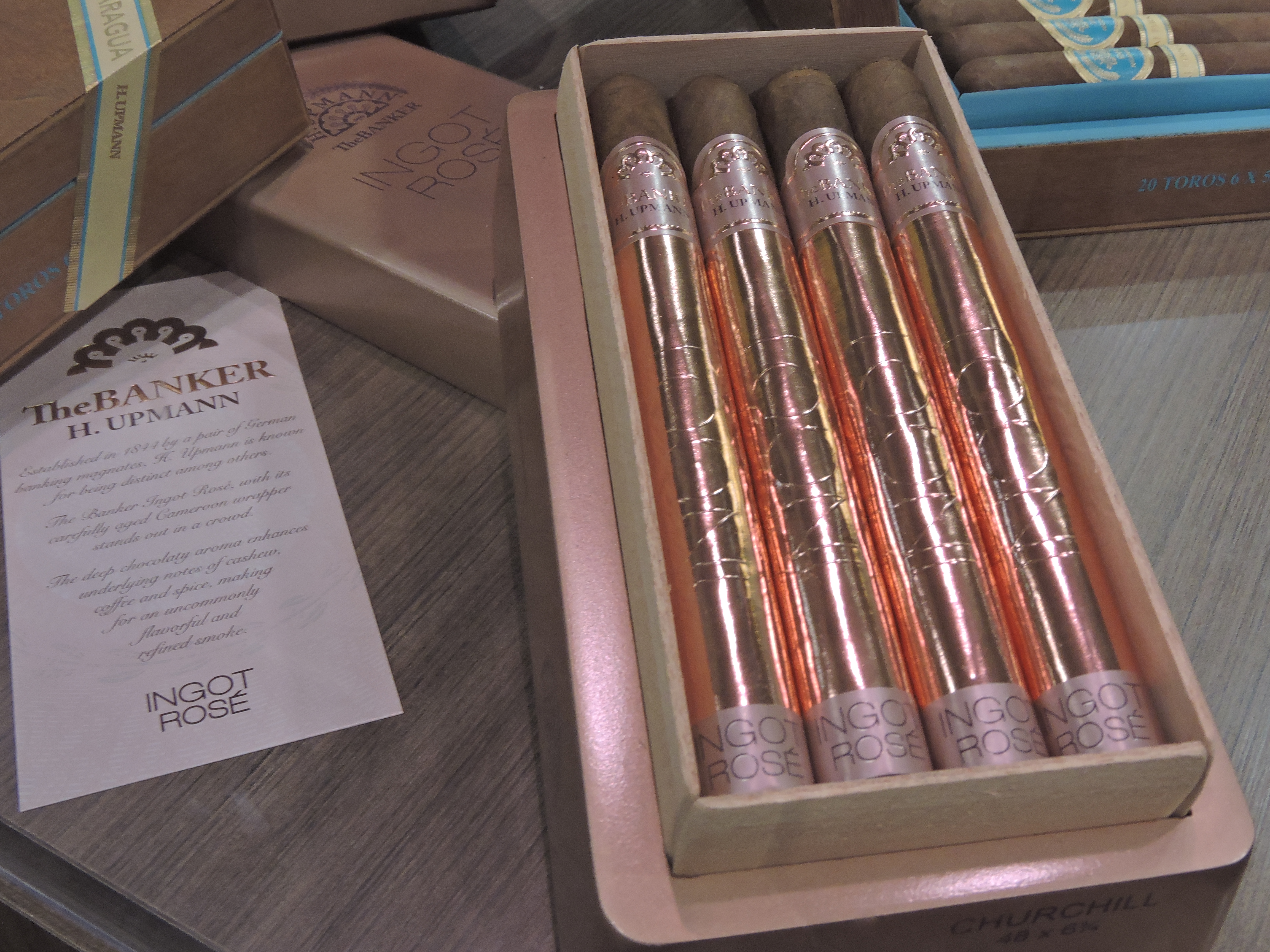 The H. Upmann Banker Ingot Rose’s Cameroon wrapper was definitely on the dark brown side. There was some mottling visible on the surface of the wrapper. The wrapper also contained a light coating of oil on it. There were also some thin visible veins and thin visible wrapper seams. 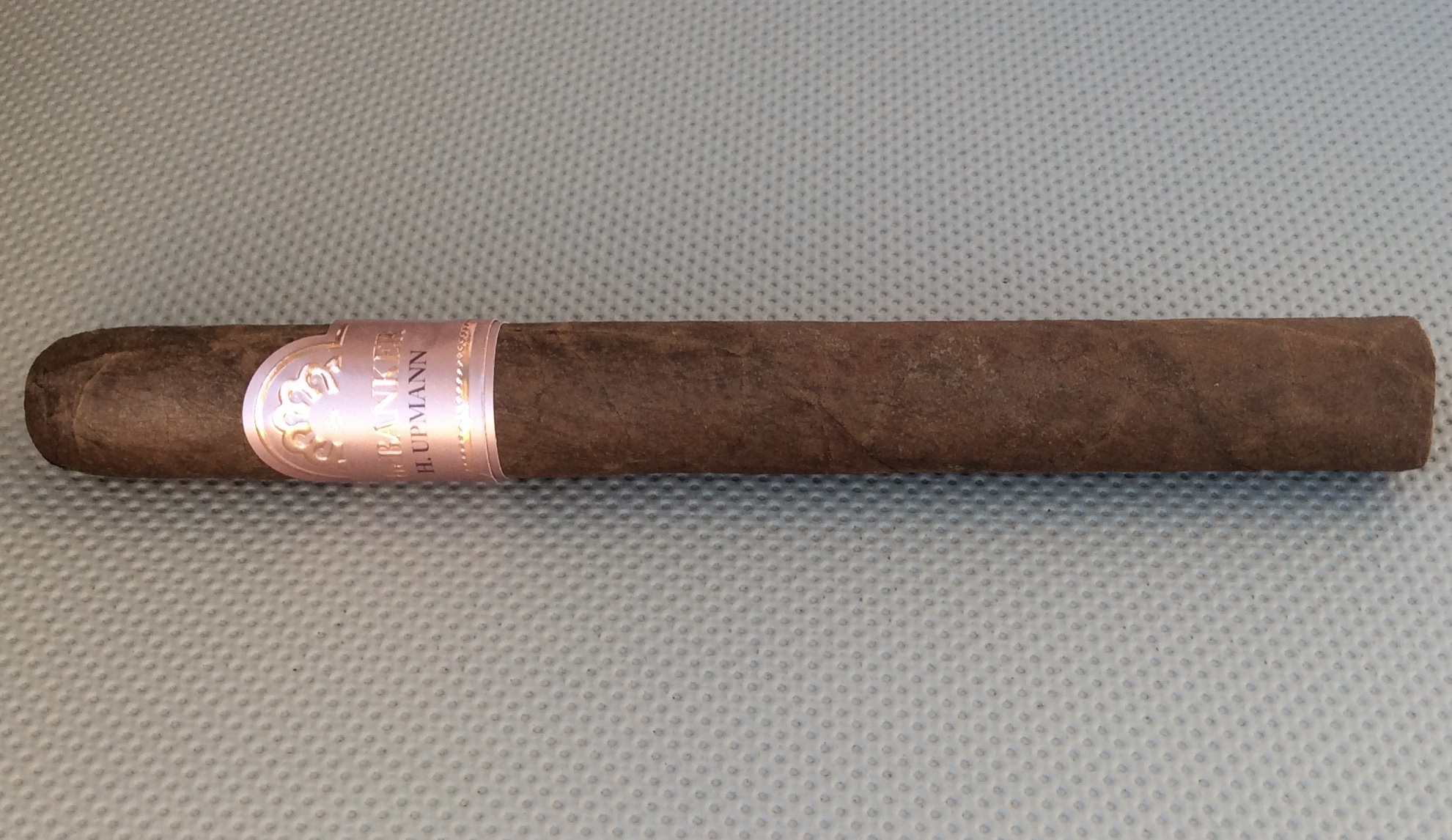 I commenced the cigar experience by removing the sleeve of the H. Upmann Banker Ingot Rosé, I then proceeded to make a straight cut into the cigar to remove the cap. It was then moved on to the pre-light draw. The cold draw delivered a mix of natural tobacco, wood, cream, and a subtle fruit sweetness. Overall I considered the pre-light draw of this cigar to be excellent  At this point I was ready to light up the Ingot Rosé and move into the smoking phase.

The start to the H. Upmann Banker Ingot Rosé delivered a mix of natural tobacco, mixed pepper, wood, and cream. Early on the wood notes moved to the forefront with the other flavors receding into the background. On the retro-hale, there was an additional layer of black pepper present.

As the Ingot Rosé moved through the first third, a fruit sweetness with a slight herbal component emerged. By the end of the first third, this sweetness joined the wood notes in the forefront, while the cream, mixed pepper, and natural tobacco notes remained in the background.

By the midway point, the natural tobacco displaced the wood notes and joined the fruit sweetness. While the sweetness had reached its apex here, it never got overpowering and the mixed pepper and wood notes provided some balance. It was this point where the cream notes diminished. Toward the latter stages of the second third, the pepper notes increased. Was the pepper increased, it morphed into more of a black pepper as opposed to a mixed pepper.

The last third of the Ingot Rosé saw a mix of the fruit sweetness, natural tobacco, and black pepper. While there was still a touch of woody notes in the background, the cream notes had dissipated. This is the way the flavor profile came to a close. The resulting nub was slightly soft to the touch and cool in temperature.

From a burn standpoint, the Ingot Rosé performed excellently. It maintained a straight burn line and had no trouble keeping a straight burn path from start to finish. The resulting ash had a light gray color. This wasn’t the firmest of ashes, but it wasn’t loose nor flaky. The burn rate and burn temperature were both ideal. 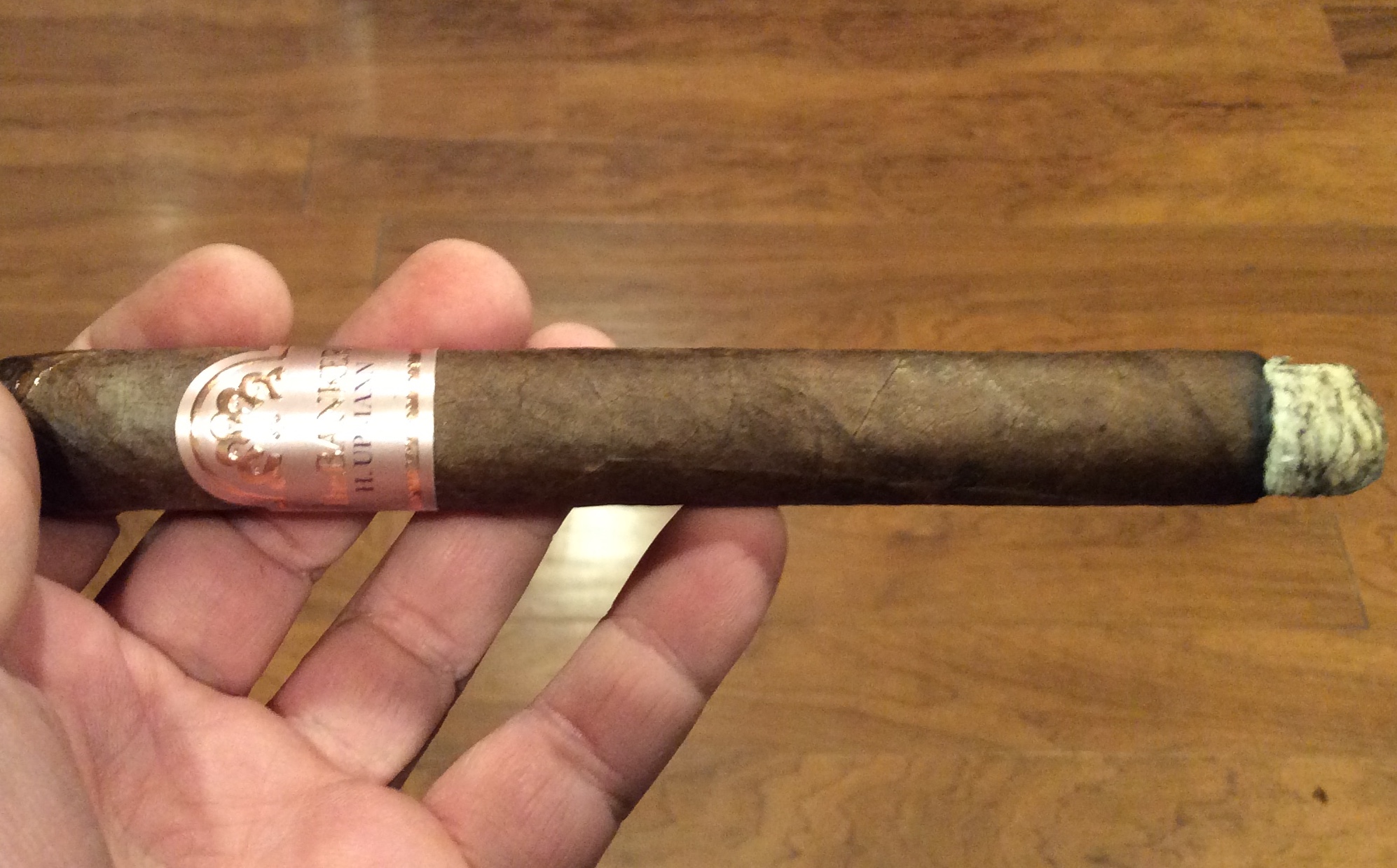 The draw to the Ingot Rosé was also excellent. It had the right amount of resistance for my liking. It also produced a nice amount of smoke.

When looking at strength and body as a whole for the Ingot Rosé, I found it to be bolder than the original Ingot Private Holding (Gold Box). The strength pretty much was on the upper end of medium to full while the body had enough depth to be considered medium to full.

In terms of strength versus body, I found the body had the edge throughout the whole smoking experience of the Ingot Rosé.

Don’t judge the Ingot Rosé by comparing the score and the assessment and value rating to the Ingot Private Holding. We’ve implemented a totally new system for both, which are skewed lower. The Ingot Rosé is a worthy successor to its gold brick predecessor. The Cameroon wrapper combined with the Peruvian tobacco in the filler will deliver an interesting, but not overpowering sweetness. This is a cigar I would recommend to an experienced cigar enthusiast, but it is certainly one I would not discourage a novice from trying. As for myself, this cigar is one I would smoke again – and warrants box worthy consideration.