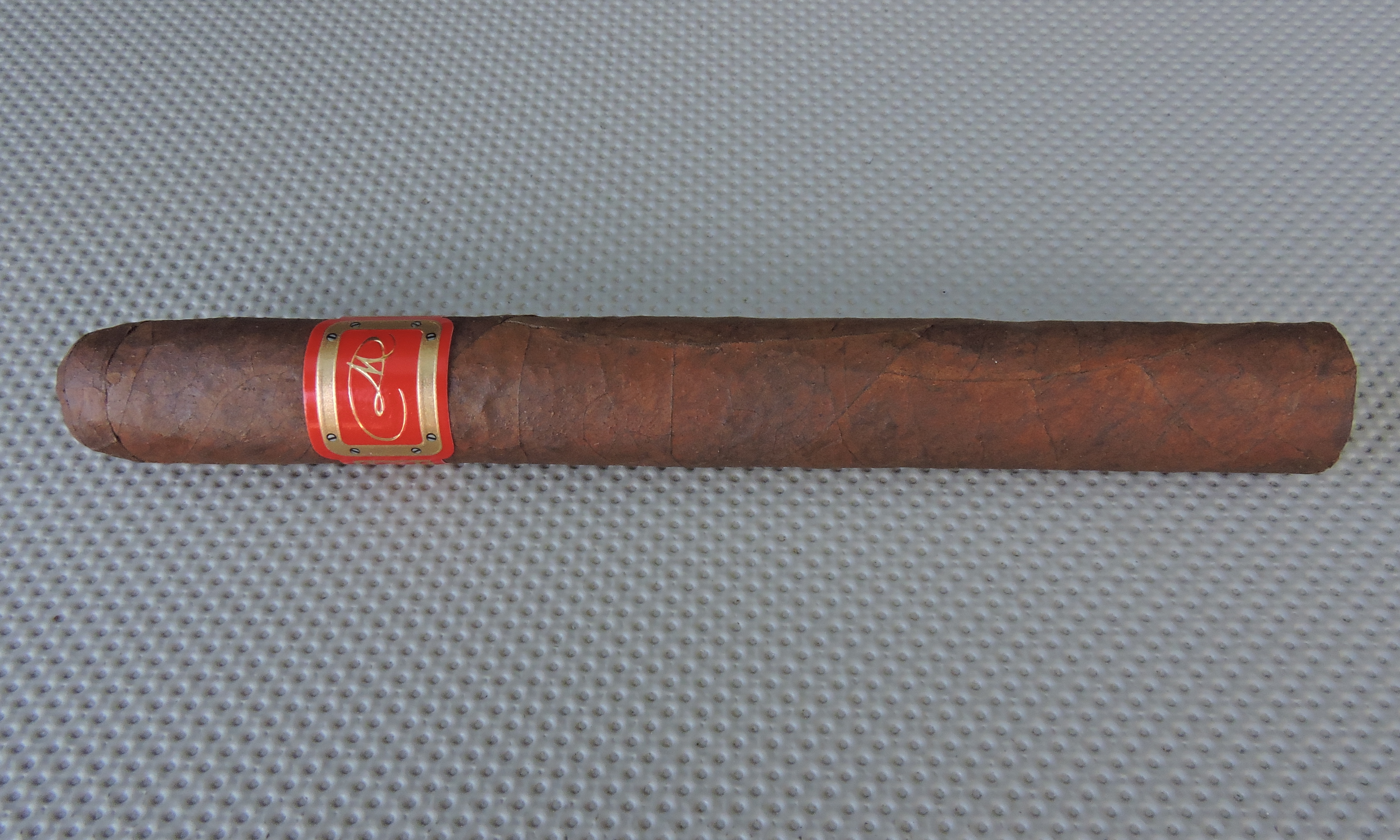 Daniel Marshall has built a reputation in the luxury segment of the premium cigar industry. Marshall is best known for producing some of the most sought-after luxury handcrafted humidors in the world. Along the way, he also built some cigars. Perhaps Marshall is best known for his limited edition Daniel Marshall Red Label 24kt Golden Torpedo. First launched in 2011, this is a cigar that is literally wrapped with over 50 individual pure 24-karat gold leaves from Italy and is meant to be smoked with the gold on it. Marshall also has three regular production lines. The blend for the Golden Torpedo is actually based on one of those lines known as the Daniel Marshall DM2 Red Label. Today, we take a closer look a the DM2 Red Label in a Corona size.

Marshall has three regular production lines: DM2 Black (Connecticut Shade wrapper), DM2 White (Cameroon wrapper), and DM2 Red (a Nicaraguan puro). For all three lines, Marshall teams up with Manuel Quesada. The DM2 White and DM2 Black are produced at the Quesada Cigars factory in the Dominican Republic. For the DM2 Red, the project was done in conjunction with both Manuel Quesada and Nestor Plasencia. The Quesadas have worked with the Plasencias on several Nicaraguan-based projects, most notably the Casa Magna brand. The DM2 Red is also a Nicaraguan-based project coming out of the country’s factory in Estelí. 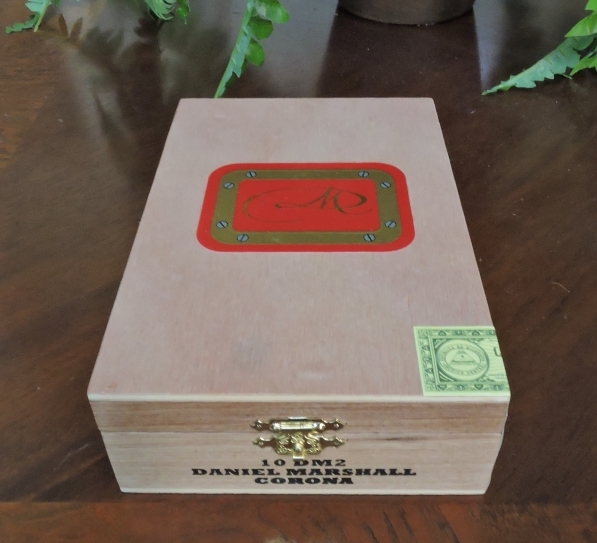 In terms of the aging process, Daniel Marshall is utilizing a two-step process. First up, the tobaccos used are aged at least five years. Secondly, after those cigars are rolled and boxed up, they are aged in climate-controlled maturing rooms for a minimum of at least 12 months.

Without further ado, let’s break down the Daniel Marshall DM2 Red Label Corona and see what this cigar brings to the table.

The Daniel Marshall DM2 Red Label Corona is a 100% Nicaraguan puro. The cigar features tobaccos from Jalapa and Estelí and is highlighted by a Colorado wrapper.

Currently there are seven sizes in the DM2 Red Label line. Each is presented in 10-count boxes. 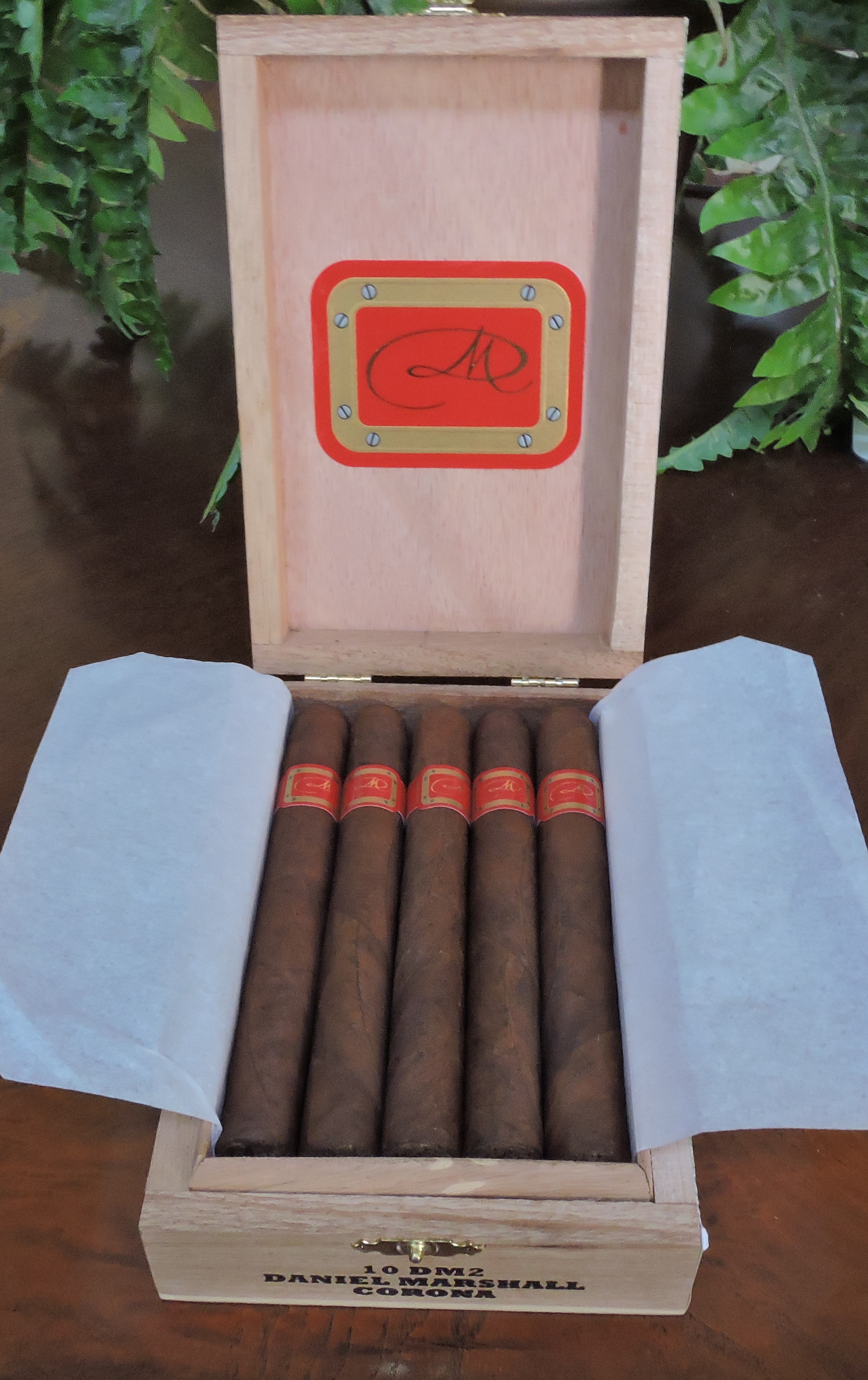 The Nicaraguan Colorado wrapper of the DM2 Red Label Corona had a dark cinnamon color to it. Upon closer examination, there was some darker mottling on the surface. The wrapper had some oil on it and was slightly on the bumpy side. There were some thin visible veins. The darker color of the wrapper did a nice job at hiding the wrapper seams. 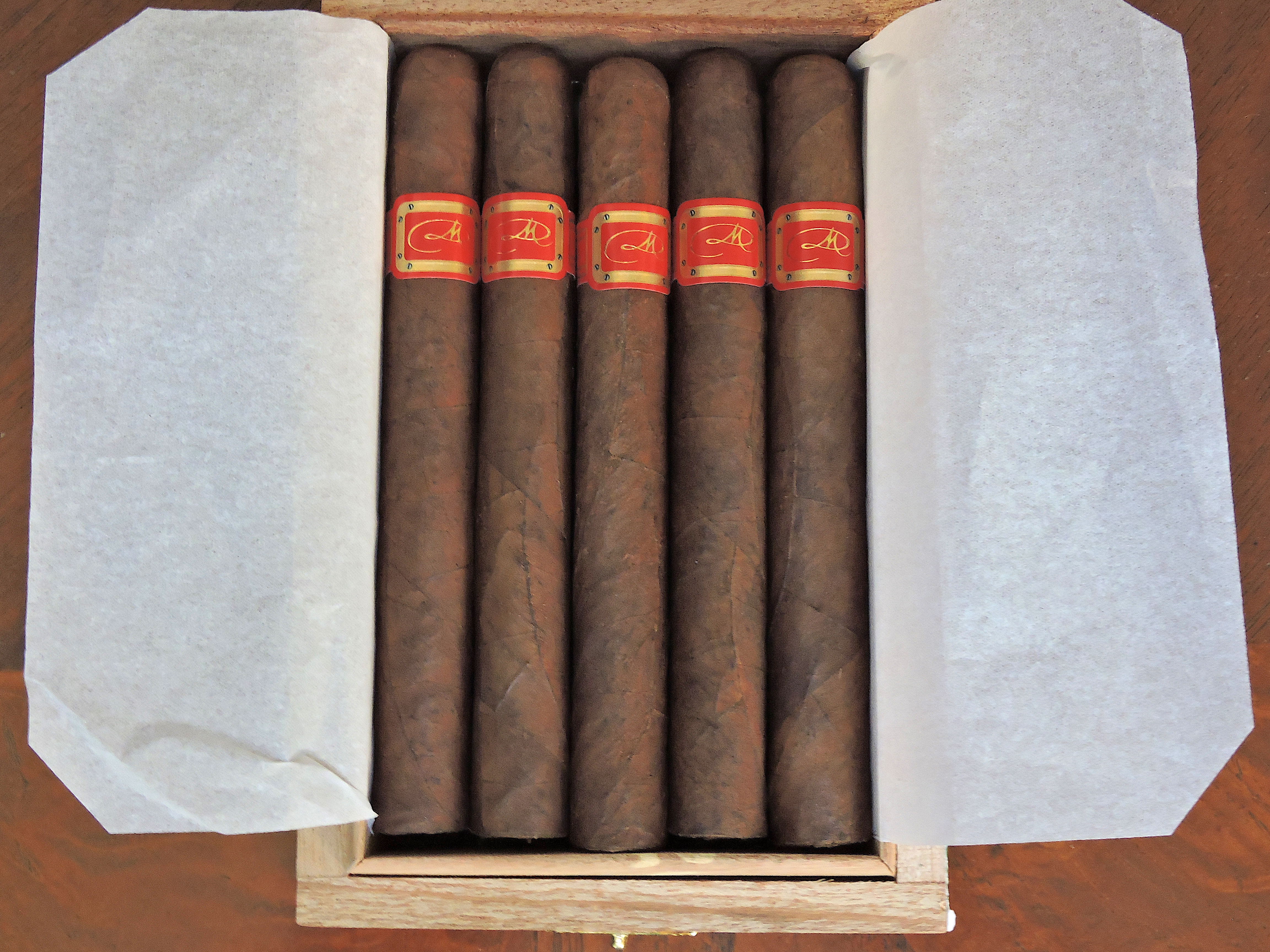 The band to the DM2 Red Label is, as one would expect it to be, red in color. The front of the band has a design to look and feel like a humidor plate. There is a gold-colored frame with elegant “DM” initials in the middle – also in gold font. On the left side of the band is the text “DANIEL” in gold font flanked by a gold pin-stripe above and below it. Meanwhile, the right side has the text “MARSHALL” in gold font also flanked by pin-stripes above and below it.

As per usual protocol, I used a straight cut to remove the cap of the Daniel Marshall DM2 Red Label Corona. Once the cap was removed, I proceeded with the pre-light draw. The cold draw delivered a mix of damp earth and some sweet cedar. Overall, I still found this pre-light profile to work for me and it was quite satisfactory. At this point, I was ready to light up my DM2 Red Label Corona and see what the smoking experience of this cigar would have in store.

The start of the Daniel Marshall DM2 Red Label Corona kicked off with notes of sweet cedar, damp earth, and cherry. As the cigar moved through the earth stages, the damp earth transitioned to more of a dark chocolate note. In addition, some notes of baker’s spice emerged. The retro-hale produced an additional layer of white pepper.

Toward the middle of the first third, the chocolate became the primary flavor note. The cedar settled as a close secondary note. Meanwhile, the baker’s spice and cherry developed a nice synergy in the background. Toward the end of the first third, some of the sweetness from the cherry diminished.

As the DM2 Red Label Corona moved into the second third, the cedar notes joined the chocolate in the forefront with the cherry and baker’s spice now secondary. By this point, the cherry didn’t have the sweetness component it had earlier in the smoke. As the cigar moved into the latter stages of the second third, the cedar notes displaced the chocolate. Concurrently there was some white pepper now surfacing on the tongue.

The final third of the DM2 Red Label Corona saw the cedar notes remain grounded in the forefront. This was balanced by the cherry, baker’s spice and chocolate. There was a little more in the way of pepper, but it never became overpowering. This is the way the cigar experience came to a close. The resulting nub was slightly soft to the touch and cool in temperature.

Overall, the Daniel Marshall DM2 Red Label Corona scored very nicely when it came to the burn. The burn had no problem keeping a straight path. Except for an occasional bit of jaggedness, for the most part, the burn line remained straight. The resulting ash had a classic gray color. This was a firm ash that came off the cigar in nice clean chunks. As for the burn rate and burn temperature, both were ideal. 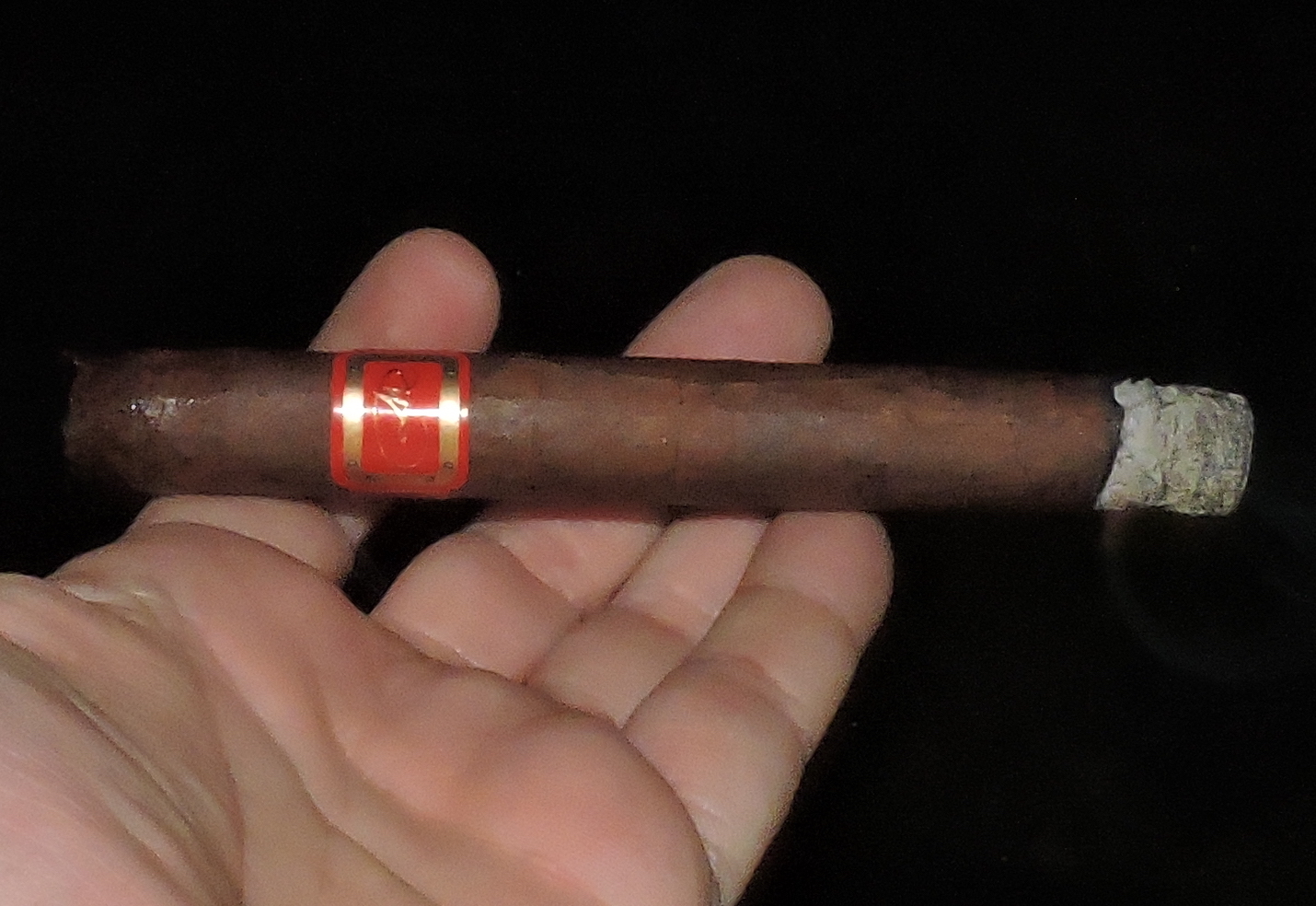 The draw of the DM2 Red Label Corona also performed quite well. It had a touch of resistance to it – which I like – especially on a cigar with a 44 ring gauge.

The Daniel Marshall DM2 Red Label Corona is a cigar that delivered a medium strength, medium-bodied smoking experience from start to finish. Along the way, both attributes did slightly increase in intensity, but in the end, the cigar remained in the medium range of the spectrum for both strength and body.  Throughout the smoking experience, the strength and body balanced each other nicely with neither attribute overshadowing the other.

The Daniel Marshall DM2 Red Label line has been around for a while, but until this round of reviews, it was the first time I had experienced smoking it. It’s a cigar that had excellent flavor and construction, and it had the right amount of complexity to keep me interested in this cigar. It’s not a cigar that will overpower you with strength or flavors that weigh on the palate. The flavors also seemed to be tailor-made for the 5 1/2 x 44 ring gauge. This is a cigar I would recommend to either a novice or experienced cigar enthusiast. As for myself, this is not only a cigar that I would smoke again, but with a 10-count box – it’s a no-brainer for a box purchase.