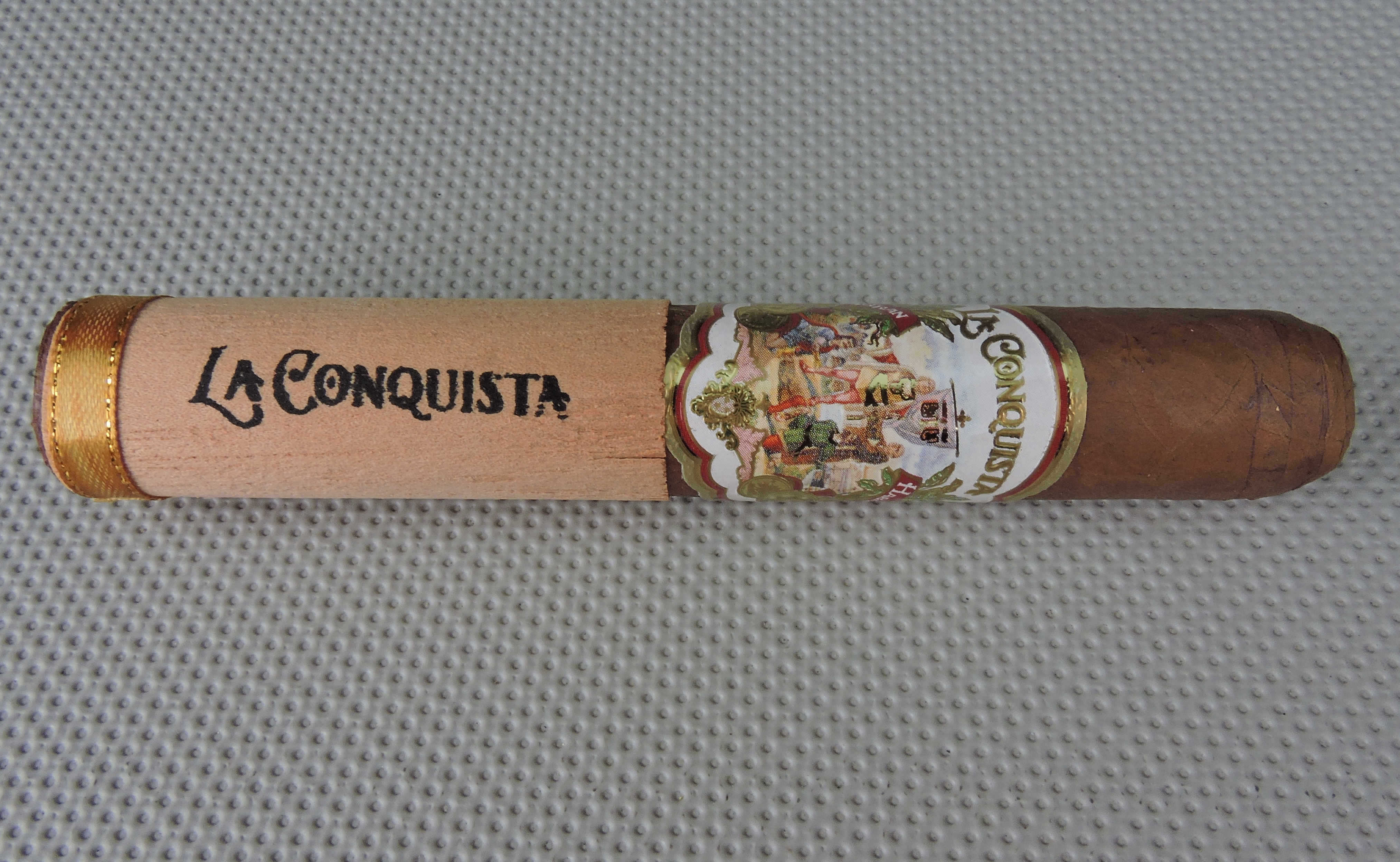 Just before the 2016 IPCPR Trade Show, Gran Habano Cigars started to circulate a pre-release product called La Conquista. La Conquista translates to “The Conquest” and once the cigar and its final packaging were unveiled at the trade show, it was very clear that this was a cigar that paid homage to the age of exploration. Today we take a closer look at the La Conquista in the Robusto size.

Gran Habano Cigars is the company owned by the father-son team of Guilliermo and George Rico. The Rico family’s involvement could be traced back to 1920 when Guillermo’s grandfather started growing tobacco. Today, the Rico family owns and operates the G.R. Tabacaleras Unidas SA located in Danlí, Honduras, with U.S. based distribution operation in Miami, Florida.

While made in Honduras, La Conquista doesn’t actually use any Honduran tobacco. It consists of Nicaraguan tobaccos that are included in all three components of the blend. This is highlighted by Nicaraguan Corojo wrapper used for the binder and filler. In addition to Nicaraguan tobacco being used, the filler features Costa Rican and Colombian tobaccos.

La Conquista is available in three sizes. Each is presented in 24-count boxes. While officially the vitolas are listed with traditional names, there are equivalent vitolas in the line floating around with the names of Christopher Columbus’s ships.

The Nicaraguan Corojo wrapper of the La Conquista Robusto had a medium brown color with a cinnamon tint to it. There was some oil on the surface. While there were some visible veins and some thin visible wrapper seams, I found this wrapper to be on the smooth side. 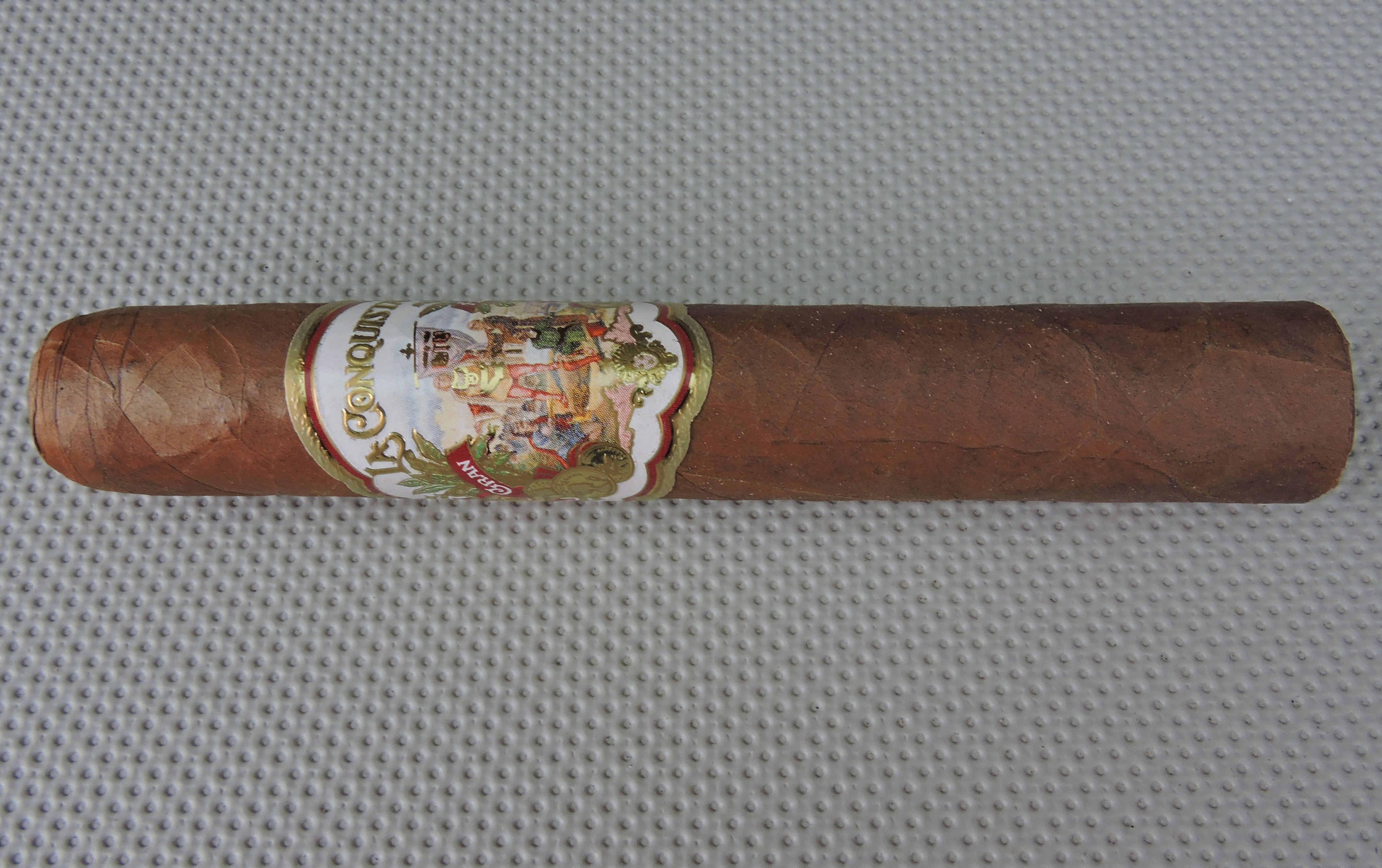 The band itself is white with gold trim. There is a portrait of what appears to be Spanish conquistadors settling in the New World along with several medallions. Above the portrait is the text “LA CONQUISTA” in gold font. There are two small ribbon designs on the left and right side of the portrait. The left ribbon has the text “GRAN” in small white font while the right ribbon has the text “HABANO – also in white font. The remainder of the band has red and both metallic and dull gold designs.

Before I commenced the cigar experience, I removed the cedar sleeve from the La Conquista Robusto. The next step was to place a straight cut to remove the cap of the cigar. From that point, it was on to the pre-light draw phase. The dry draw delivered a mix of leather and cedar with a slight citrus note.  I considered the pre-light draw of this cigar to be satisfactory. It was now time to light up the Gran Habano La Conquista Robusto and see how this cigar would perform during the smoking phase.

As the La Conquista Robusto moved through the first third, the natural tobacco and orange rind maintained a nice fusion. The pepper notes in the background were soon replaced by more of a classic cedar-sweet spice. Simultaneously, a creamy oak note emerged that gave the cigar some smoothness throughout the smoking experience.

The start of the second third saw the natural tobacco and orange rind remain the primary notes. During the early stages of this third, the orange rind delivered a little additional citrus sweetness. In the background, the creamy oak notes increased in intensity with the cedar notes pretty much staying grounded in the more distant background. By the later stage of the second third, the creamy oak moved into the forefront with the natural tobacco. The orange rind moved into the background with the cedar.

The last third of the La Conquista Robusto saw the creamy oak notes take over as the primary note. By this point, the orange rind, natural tobacco, and cedar were secondary notes providing complementary flavors to the overall profile. This is the way the La Conquista Robusto came to a close. The resulting nub was firm to the touch and cool in temperature.

Overall, the burn performed quite well on the La Conquista Robusto. The cigar had no problems maintaining a straight burn path. There was a little waviness on the actual burn line, but it didn’t really warrant much in the way of additional touch-ups. The resulting ash was on the firm side with a salt and pepper color to it. Meanwhile, the burn rate and burn temperature were ideal. 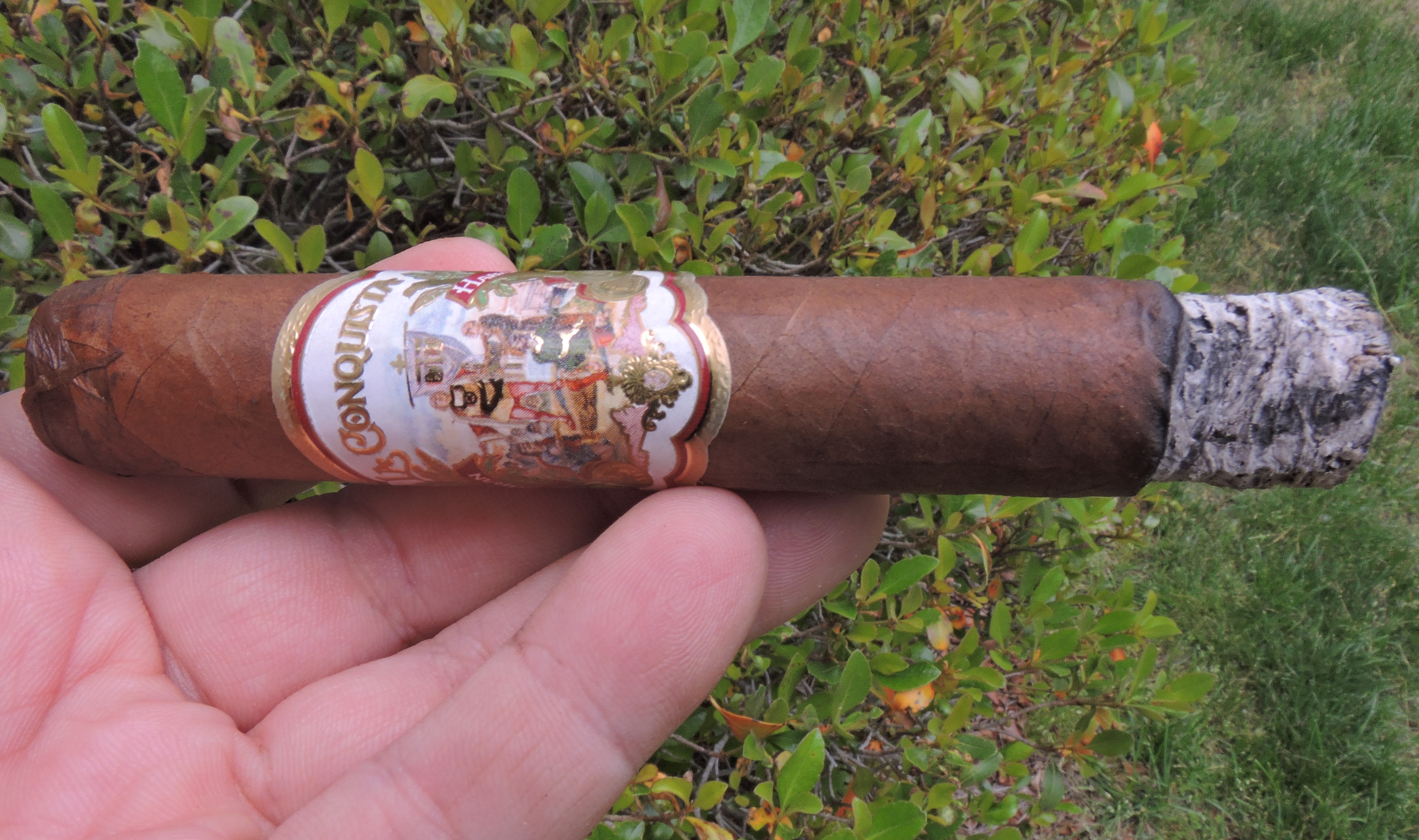 The draw to the La Conquista Robusto also performed quite well. It had a pleasant touch of resistance. This was also a cigar which produced an ample amount of smoke.

The La Conquista Robusto was a cigar that was positioned as full-bodied, but to me, this cigar was squarely medium. This isn’t a negative, as I found the medium-bodied profile of the La Conquista Robusto meshed very nicely with the flavor profile. The medium-bodied flavors were also countered by medium strength.  Both the strength and body balanced each other nicely with neither attribute overshadowing the other. I also found the strength and body levels to maintain a consistent intensity level from start to finish.

The Gran Habano La Conquista Robusto was an enjoyable smoke. It delivered nice flavor, it had excellent construction, and there was enough complexity in this cigar to keep me interested. The La Conquista Robusto comes in at $8.00 – which makes it a nice value. When it comes to delivering cigars at $8.00 or under, Gran Habano does as good a job as any company. This is a cigar to be enjoyed by any cigar enthusiast any time of the day. As for myself, this is a cigar I would reach for again – and it’s one worthy of having multiples in my humidor.