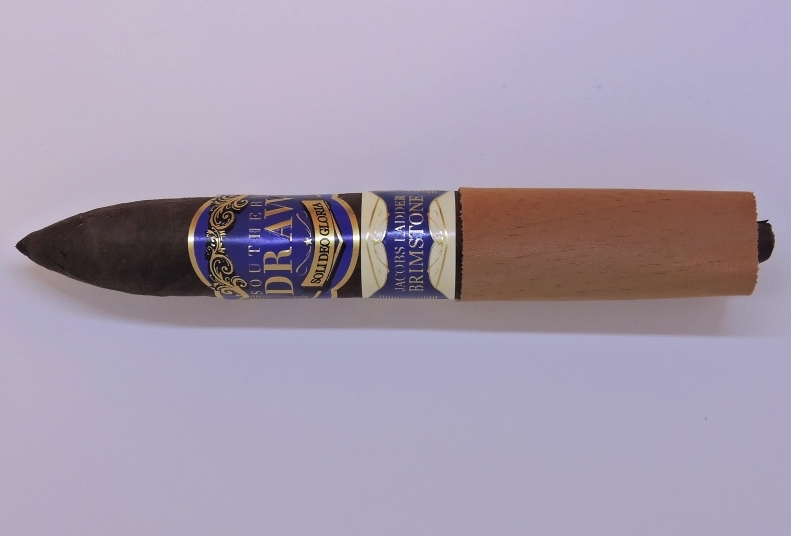 Over the past few years, Southern Draw Cigars has carefully been expanding the number of brands in its portfolio. The company has certainly worked hard to offer a wide range of cigars to satisfy a wide range of cigar enthusiasts. That would continue into 2019, but the company would take a different route on executing on its strategy. Instead of introducing a new brand, it made some key blend and vitola extensions to its highly successful brands. One of the extensions would be to one of its most popular lines, Jacobs Ladder. The extension was called Jacobs Ladder Brimstone and it’s the cigar we are taking a look at today.

Without further ado, let’s break down the Southern Draw Jacobs Ladder Brimstone and see what this cigar brings to the table.

Like the original Jacobs Ladder, the Brimstone uses a Pennsylvania Broadleaf wrapper. The remainder of the blend was different. The binder is a USA Maduro (as opposed to Ecuadorian Maduro for the regular Jacobs Ladder) and a filler of triple ligero Nicaraguan filler (the regular production Jacobs Ladder does not have this). Production is handled at AJ Fernandez’s factory in Nicaragua.

The Brimstone is currently offered in one size – a 6 x 56 perfecto. The cigars will be presented in 20-count boxes with 20-count refills still available. Brimstone was also one of the first lines to use a new box-design for Southern Draw Cigars. The wooden-box has almost a “shoebox” look. 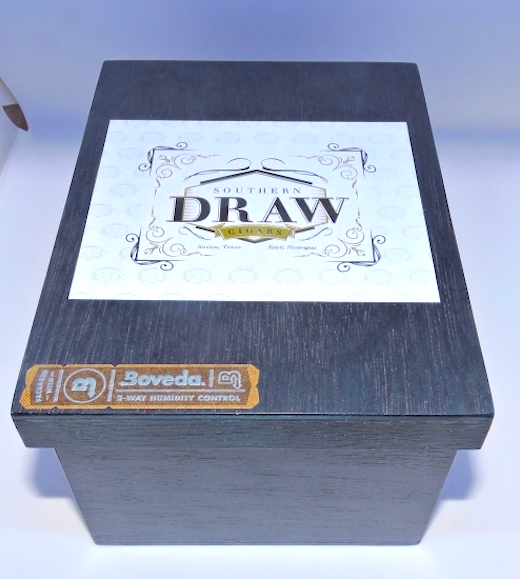 The Pennsylvania Broadleaf wrapper of the Southern Draw Jacobs Ladder Brimstone had a dark espresso-bean color to it. There wasn’t much in the way of oil on the surface. There was a slight ruggedness to the texture of the wrapper. The surface of the wrapper had some thin visible veins and thin visible wrapper seams. The perfecto had a pointed tip with a gentle taper. The footer of the cigar had a salomon-like nozzle shape with a small open tip. 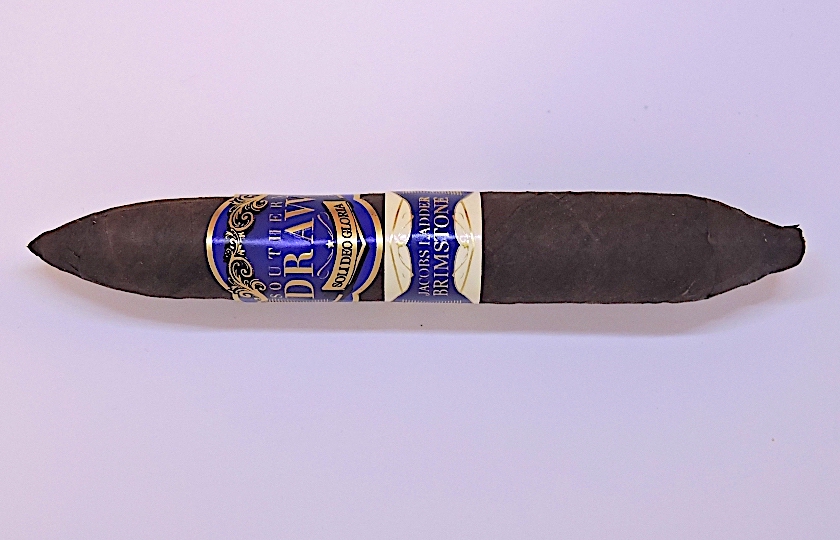 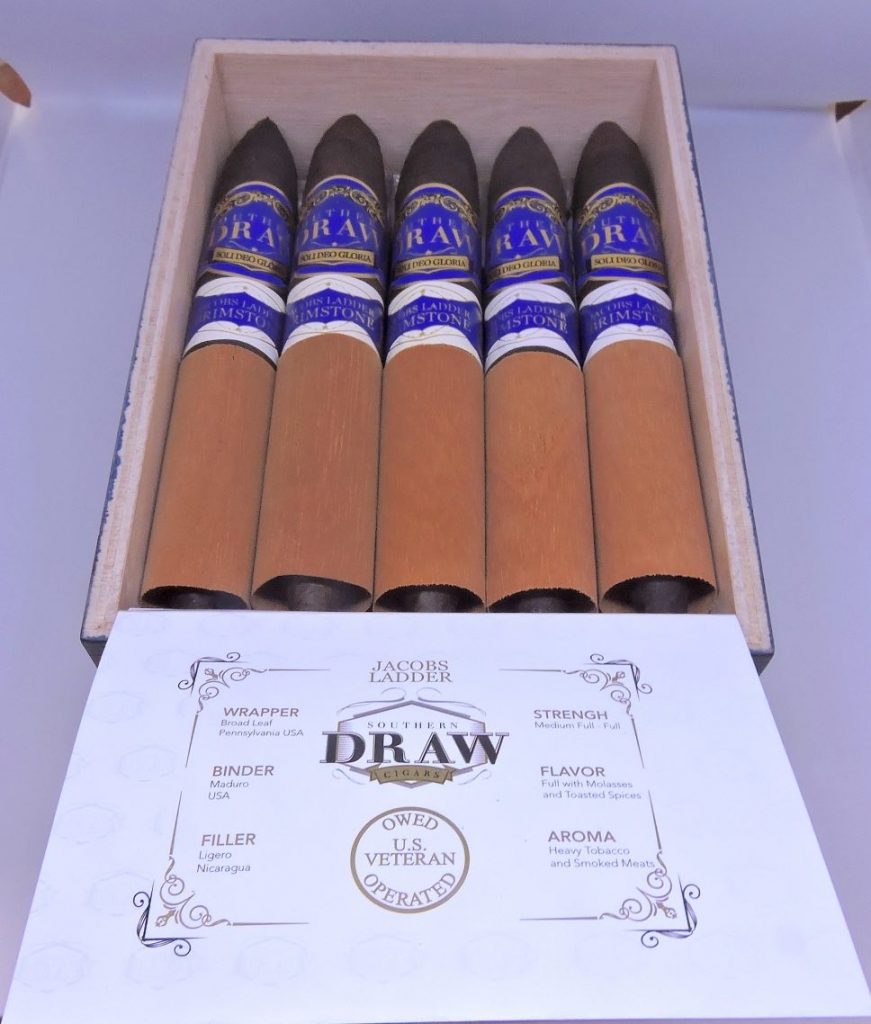 After removing the cedar sleeve of the Jacobs Ladder Brimstone, a straight cut was used to cut the tip of the cigar. Once the tip was cut it was time to move into the pre-light draw stage. The cold draw delivered a mix of coffee, earth, and light cedar. Overall I found this to be a satisfactory pre-light draw experience. It was now time to apply fire to the Brimstone, light up the cigar and move into the smoking phase.

Jacobs Ladder Brimstone kicked off with notes of white pepper, cedar, coffee, and earth. As the cigar burned through the nozzle tip, the coffee and earth notes moved to the forefront and a slight dark fruit sweetness emerged. The white pepper and cedar notes settled in the back. There was an additional layer of red pepper on the retro-hale.

Once the Brimstone moved past the nozzle, the pepper spice and dark fruit notes increased in intensity. The dark fruit and pepper didn’t reach the forefront, but alternated in intensity. In particular, the pepper notes could be felt on the back of the throat. As the Brimstone reached the midway point, a dark chocolate sweetness emerged in the forefront with the coffee and earth notes.

By the final third; the coffee, dark chocolate, and earth notes remained at the forefront. The white pepper spice now was much more prominent and closed in on the forefront. While the spices didn’t overpower the blend, they definitely contributed to giving this cigar a kick. Meanwhile, there still were notes of dark fruit and cedar present. This is the way the Jacobs Ladder Brimstone came to a conclusion. The resulting nub was soft to the touch and cool in temperature.

On each of the samples of the Jacobs Ladder Brimstone, there was a point where the burn wanted to meander. It happened at different points – but it seemed like the middle of the cigar is mostly where this happened. Touching up the cigar did put the burn on track. I didn’t find the number of touch-ups to be excessive. The resulting ash had a medium gray color with some darker spots. The ash was skewed toward the firmer side. The burn rate and burn temperature were both ideal. 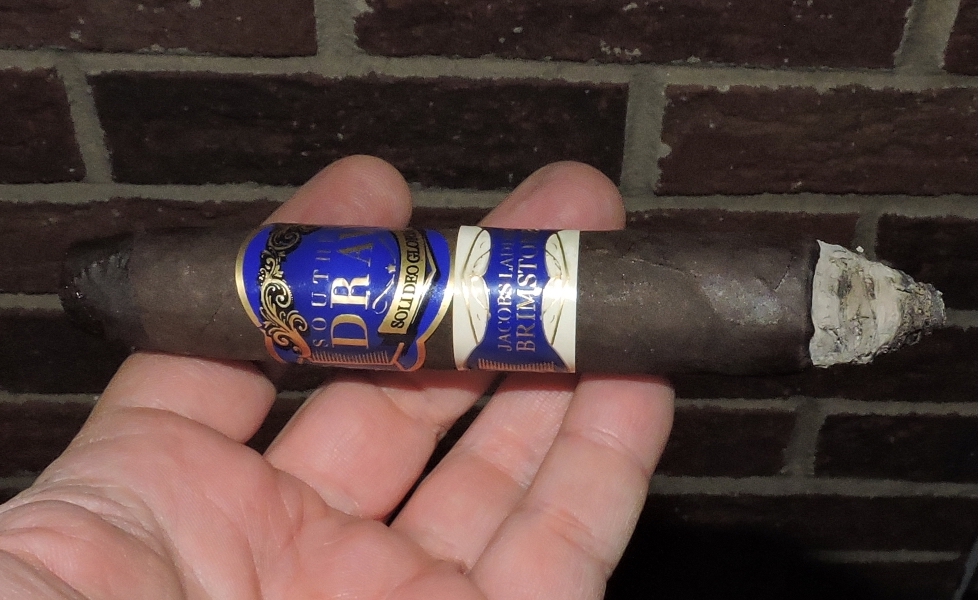 For a perfecto on the larger side, I found the draw of the Brimstone to perform quite well. There was a good balance between the openness and resistance on the draw. In the end, this was a low maintenance cigar to derive flavor from.

I would like to comment on the strength and body not reaching the levels of the original Jacobs Ladder. I had been smoking Brimstones for a few months and I did find this cigar mellowed over time. The ones with less age did exhibit fuller strength and body, but since those cigars weren’t part of the assessment process here, I am going with how they were assessed for review (which was with about six months of age).

In terms of the mellowing of the cigar, while on one hand, it might disappoint those looking for something bolder than the original Jacobs Ladder, I found it actually worked in favor of this blend. As the blend mellowed, it became less aggressive and more complex. The flavors became richer and robust and while this was a very good cigar six months ago, it’s an even better cigar at this point. I also really liked how this blend came together in a perfecto. This is a cigar I would still recommend to a more seasoned cigar enthusiast, but a novice shouldn’t be scared away either. As for myself, it’s one I would smoke again and it certainly warrants box worthy consideration.