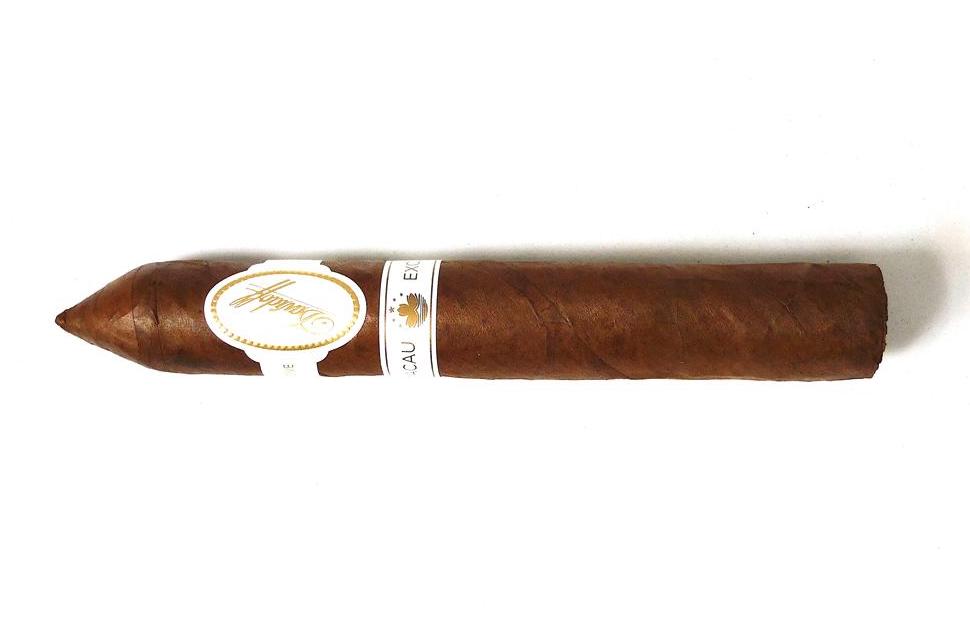 The Vault Series has somewhat been a double-edged sword. Many Davidoff enthusiasts have been excited to see many of these rare and classic blends making a return. On the other hand, a good number of these releases have been packaged in cellophane or craft paper bundles. Some critics (including this author) believe that this packaging has not lived up to the luxury brand standards that Davidoff has become famous for. Some Appointed Merchants have also expressed displeasure about the lack of availability of these cigars on the Davidoff website.

Without further ado, let’s break down the Davidoff Exclusive Macau and see what this cigar brings to the table.

The Davidoff Exclusive Macau is available in one size – a 6 x 52 Belicoso. This is a size Davidoff has released in many of its regional and store exclusive releases. The cigars are packaged in ten-count craft paper bundles.

The Ecuadorian Habano Oscuro wrapper of the Davidoff Exclusive Macau had a more of a dark rose look in my book. Upon closer examination, there was some mottling present on the surface. There also was a layer of oil present on the surface. There were some visible veins while most of the wrapper seams were well hidden. The Belicoso tip almost had the shape of a chocolate chip and was steeply tapered toward the tip.

There are two bands on the Davidoff Exclusive Macau. The first band uses the design of the Davidoff White label band. It features the name “Davidoff” in classic cursive gold font on an oval field of white. There are small gold circles going around the perimeter of the oval. The word “EXCLUSIVE” (in gold font) flanks to the left of the oval field. To the right of the oval is the text “GENEVE.”

The second band is also white with gold font and gold pinstripes near the top and bottom. On the center of the band is the text “MACAU EXCLUSIVE” going across it. In between the two words is the emblem of Macau.

Prior to lighting up the Davidoff Exclusive Macau, a straight cut was used to remove about half of the length of the tapered section. After removing the tip it was on to the pre-light draw experience. The cold draw delivered a mix of cedar, nut, hay, and black pepper. This was a satisfactory pre-light draw. At this point, it was time to light up the Davidoff Exclusive Macau and see what the smoking experience would have in store.

The start of the Davidoff Exclusive Macau picked up right where the pre-light draw left off with more notes of cedar, nut, hay, and black pepper. Early on both the cedar and nut notes moved into a forefront. There was a slight underlying sweetness to the cedar notes. Meanwhile, the hay and black pepper settled into the background with the black pepper the most prominent of the secondary notes. The retro-hale delivered an extra layer of black pepper.

During the second third, the cedar and nut remained in the forefront. At times the nut seemed to have a slight edge. Meanwhile, the black pepper diminished somewhat in the background. A mixed fruit note also emerged and during this phase, there were times this was the most prominent of the secondary notes. In the more distant background, the hay notes could still be detected.

The final third of the Davidoff Exclusive Macau saw the cedar and nut still in the forefront, but the pepper notes re-emerged. Once again, these became the most prominent of the secondary notes and essentially were on the doorstep of becoming primary notes. There still were notes of fruit and, to a lesser extent, hay present in the background. This is the way the Davidoff Exclusive Macau came to a close. The resulting nub was cool in temperature and slightly soft to the touch.

While the burn of the Davidoff Exclusive Macau maintained a straight path, it had somewhat of a wavy burn line. This is a cigar that did require multiple touch-ups along the way. The resulting ash was mostly light gray with some dark spots. This wasn’t the firmest ash, but it wasn’t loose or flaky either. As for the burn rate and burn temperature, both were ideal. 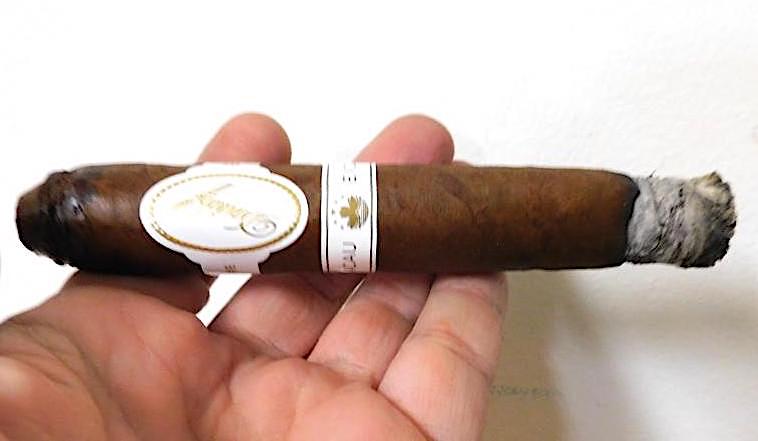 Burn of the Davidoff Exclusive Macau

The draw of the Davidoff Exclusive Macau performed quite well. There was a touch of resistance on it – which is something that I prefer on a draw. The head of the cigar where the belicoso tip was maintained a good amount of firmness.

Much to my surprise, the strength maintained the edge over the body throughout the smoking experience. I’m not sure I can remember a time this has happened on a Davidoff.

When it came to the Davidoff Exclusive Macau, I found the first 2/3 of this cigar much more enjoyable than the last third. I did like the fact that this cigar had a bold profile. The spiciness of this cigar comes at both the beginning and the end with the middle third much mellower. The problem was I found the spice of the last third threw off the balance of the other flavors and the profile became much more chaotic. On merit alone, this score has a very respectable 89 score, but factoring in the $30.00 price point, I personally didn’t see it as a good deal. In the end, while this is a cigar I would smoke again, it’s still one that carries a high enough price tag where I would recommend trying one first.