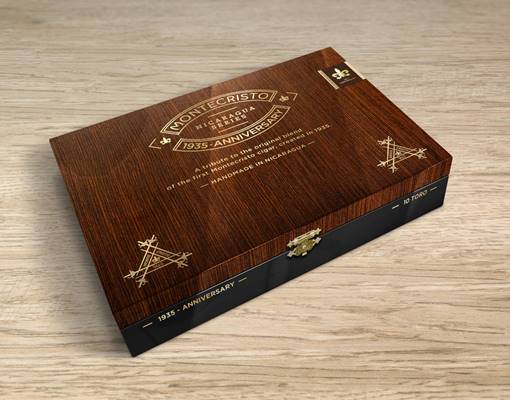 2020 marks the 85th anniversary of the Montecristo brand – and Altadis USA has announced a cigar to commemorate the occasion with the Montecristo 1935 Anniversary Nicaragua. It’s described as a collaboration between the famed Grupo de Maestros, Tabacalera USA Director of Product Capability Rafael Nodal, and master blender AJ Fernandez.

In the end, the blend consisted of 100% Nicaraguan tobaccos produced in four soft-pressed sizes: Toro (6 x 54), No. 2 (6 1/8 x 52), Churchill (7 x 52) and Demi (5 1/2 x 46). Each is presented in 10-count boxes except the Demi which is in 20-count boxes. According to Cigar Aficionado production for the Montecristo 1935 Anniversary Nicaragua is being handled out of AJ Fernandez’s San Lotano factory in Ocatel, Nicaragua.

“To honor the age-old tradition of soft-pressing cigars, the Montecristo 1935 Anniversary Nicaragua will be introduced as a soft-pressed series of four sizes,” commented Nodal in a press release, “The cigar offers a luxury showcase from seed to smoke that combines classic craftsmanship and extra-aged estate tobaccos from Nicaragua’s best growing regions.”

The Montecristo 1935 Anniversary Nicaragua is scheduled to arrive at retailers in November.