Feature Story: TPE 21 – A View from the Sidelines

As most of our readers know, Cigar Coop passed on going to TPE 21. We explained the reasons last week. There just wasn’t enough time to get vaccinated and prepare properly to cover a Trade Show. In the interim we continued our product coverage, had numerous conversations with attendees, and had a live broadcast with our friends from How Bout That Cigar (HBTC) to get a view of the Trade Show. Cigar Coop will plan on being at TPE 22.

Our job at Cigar Coop is media. For major events, we do like to recap, reflect, and do some Monday Morning Quarterbacking. It’s very hard and in some cases unfair to do when you are not there. Since we did have numerous conversations with attendees and did partner with HBTC for our broadcast, I thought it would be good to recap what was learned. I’ve attended TPE in the past, so I can put certain things in context. There is more of an emphasis on the positives here because it’s unfair to criticize an event I was not at.

Everybody’s Happy, Part 2: Vibe of the Trade Show was Positive

Last year, I reported that at TPE 21, “Everybody’s Happy”. While much of the planet is still coming out of a pandemic, the mood was incredibly positive. All of the conversations I had with manufacturers emphasized this positive vibe. All of the video coverage reflected a positive vibe as well. Even with some mask enforcement as a part of the landscape, I heard no complaints.

During the COVID-19 pandemic, many wondered if going virtual in the cigar would be a replacement for an in-person event. The mood out of TPE 21 was that the cigar industry was very much hungry for a major in-person event.

Let’s face it, unless sales numbers are disclosed, we will never have a good view into this. In the recent years when attendance was down at the Trade Show, the positive spin that was always applied was “traffic was down, but the people who were there were buying.” Very few companies would ever say their numbers are down. It’s also hard to gauge a true ROI because: 1) You don’t have sales numbers; 2) most (in particular, smaller) companies will say they had a good short-term tactical ROI without looking at the long term strategic ROI.

In the conversations I had, there was none of that rhetoric at TPE 21. Everyone seemed to be pleased with attendance (those who had a ticket to the event), foot traffic (those actually on the trade show floor), and the actual sales it generated. There was little reason for me to doubt that was the case.

The Look of the Trade Show was Excellent

I probably was the only one who harped on this, but I was quite disappointed with the cigar industry booths at TPE 20.

My big complaint from 2020 was the booths looked quite inferior to the alternative tobacco product booths. In fact the word “flea market” was applicable in some cases. I also thought the Pavilion for the smaller companies looked too industrial. I’ve been told I was nitpicking – and perhaps that’s a valid argument; however I go back to the fact that most of us consider premium cigars a luxury product and the presentation at a trade show should reflect that.

TPE 21 looked considerably better. It looked more like a trade show positioned for premium, luxury products. Gone was the industrial-look of the 2020 pavilion. This was replaced by more of a wood-finish look for kiosks. Many companies upgraded their booth spaces and it looked much better than the previous year. While there were others, booths such as Altadis, Espinosa, and Dunbarton Tobacco & Trust were ones that caught my attention.

The folks at Halfwheel shot a great 360 video which you can see here. This validated much of what I saw through other videos, photos, and word of mouth.

Good job by TPE and the companies who were exhibiting this year!

In several conversations I had with manufacturers going to both shows (PCA and TPE), the message was loud and clear. The lion’s share of the new product announcements were being held for Premium Cigar Association (PCA) Trade Show in July.

This was done for three reasons: 1) Many companies were worried about showcasing the new products at TPE at the expense of the PCA trade show. If they took orders or showcased newly announced products, they feared it could hurt their plans at PCA; 2) Many of these companies really support the PCA. They wanted to take advantage of a sales opportunity and getting back in front of customers at TPE, but they didn’t want to hurt PCA by launching ahead of the curve; 3) Many of these companies cited delays out of the factories on both product and boxes. They didn’t want to launch something they couldn’t ship or offer samples of.

In the end, TPE is proving to be a good option for companies to make sales. I think over time, the show is heading in the right direction, and as it grows, it will strengthen the Expo component of its event to showcase new product innovation. 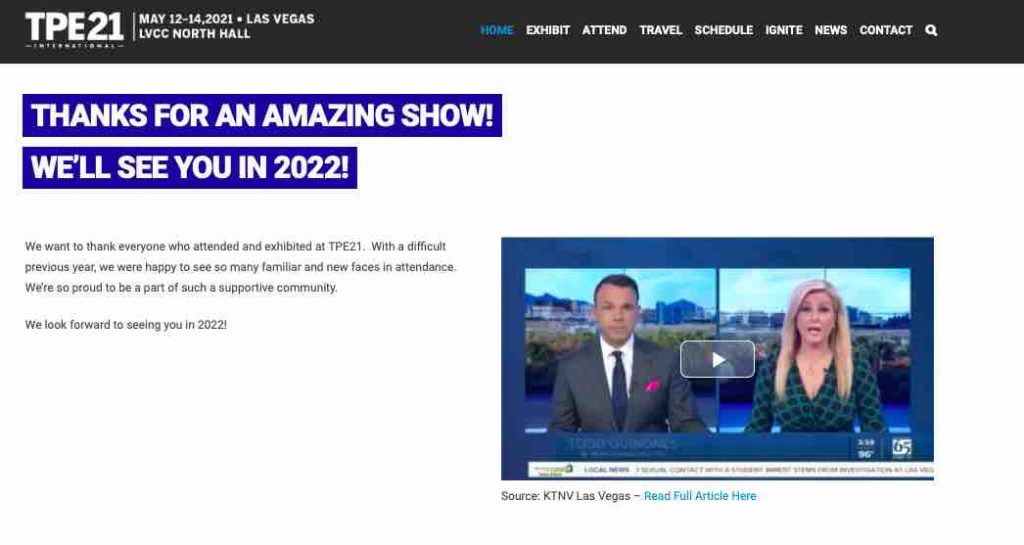 TPE 21 got some major press from the mainstream media and did a good job at letting everyone know. They wasted no time in updating their website leveraging the press provided by local Las Vegas ABC affiliate KNTV covering the Trade Show. The show was nationally significant because of the fact that TPE was the first convention after the COVID-19 shutdown at the Las Vegas Convention Center.

The cigar industry’s problem for many years is that it has not invested enough in public relations to build conduits to mainstream media. While the KNTV coverage also focused on alternative products, this was an important milestone for TPE. I don’t think any previous IPCPR Trade Show ever had mainstream media coverage. TPE took the football and ran it in for a touchdown here.

TPE should also be commended for putting an excellent safety plan together. When it comes to mask wearing, this was going to be a challenge no matter what. While smoking was allowed in booths and in designated trade show floor areas, you were not supposed to walk around without a mask.

The reports we had were the mask enforcement safety team consisted of women in skin-tight outfits. This was a brilliant and humorous idea to keep a positive vibe at the show. I’ll also say that regardless of the interesting safety patrol, the overwhelming feedback I got from those attendees were that TPE had a fair safety policy, particularly around mask enforcement.

On the other hand, I’m disappointed in our industry that skin tight outfits were necessary for an enforcement team. Anyone who goes to TPE has a responsibility to carry out the rules they put in place. There must have been some clear red flags after day one – otherwise there would not have been the memo that went out. At the same time, I can understand TPE not going heavy-handed for day one. I believe the idea was to create a fun, welcoming environment – and one that was safe as well.

If you think about it, TPE really faced a major challenge – they had to deliver the first convention in Las Vegas in the post COVID-19 pandemic shutdown era. They had to plan a trade show in the way of a lot of uncertainty. The pandemic world has seen ever-changing “guidance” and regulations handed down. They also were essentially the guinea pig for the convention world to see if a trade show could actually be pulled off in this new era. While I look at this from the sidelines, I cannot help but say this was a job well done. TPE represented the tobacco industry very well and I believe this will position them to continue to grow.

« Live from the TPE 21 with How Bout That Cigar » The Blog: KMA Talk Radio Episode 419 – BigTime Tommie Romola