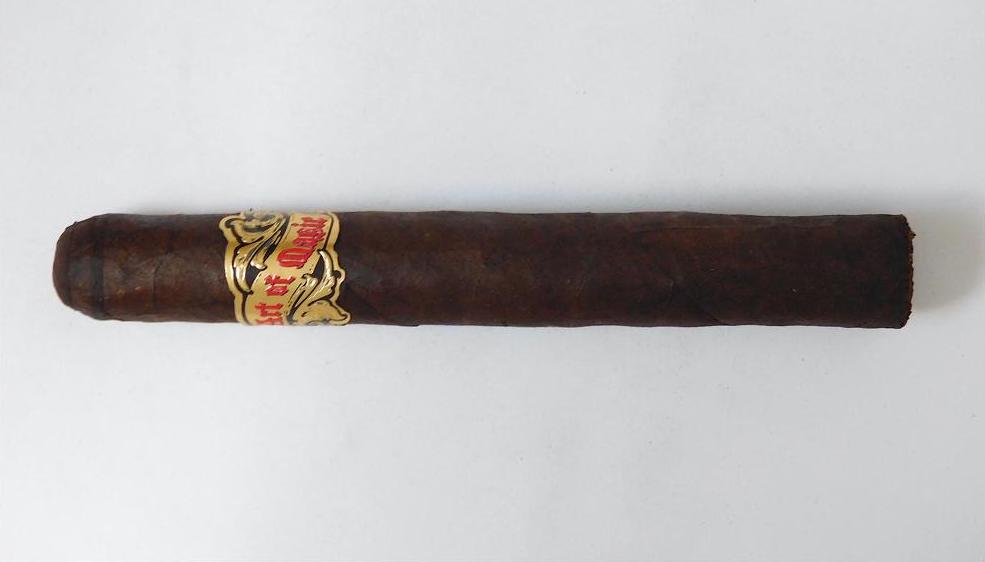 The Art of Magic is a new limited edition project started by Vintage Rock-A-Feller Cigar Group (VRCG). In 2017, Vintage Rock-A-Feller Cigar Group was acquired by Kevin Schweitzer, who at the time was a Wall Street trader who had been a cigar enthusiast for 25 years. At that time, Schweitzer became the company’s sole owner and President and set his sights on taking the company to the next level. Since that time, Schweitzer has worked on both streamlining and strengthening the current portfolio. Art of Magic is perhaps the most ambitious project Schweitzer has taken on to date. It’s a more ultra-premium limited-edition offering. While VRCG has worked with factories such as American Caribbean (Nicaragua) and Tabacalera L&V (Dominican Republic), Art of Magic marks the first time VRCG has worked with Aganorsa Leaf with both their TABSA factory and their tobacco. Today we take a closer look at the Art of Magic. 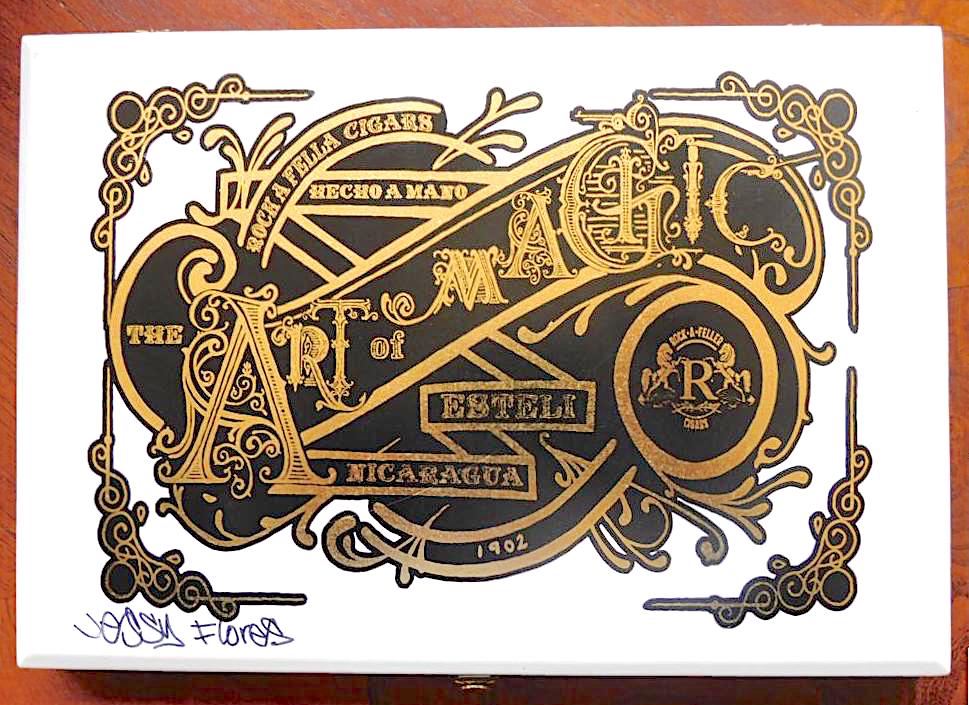 The name Art of Magic is inspired by Schweitzer’s love of magic. Schweitzer himself is a magician and a member of the Society of American Magicians. The packaging is also quite different than anything that has been seen with the Rock-A-Feller  products before. The artwork for the packaging for the Art of Magic was done by Jessi Flores, who used to run Subculture Studios for Drew Estate. As a part of the release, 5% of the proceeds will go to the charity Phuck Cancer. Flores’ daughter Stephanie Nicole is going through a very difficult battle with cancer. The proceeds from the Phuck Cancer campaign will help fund Stephanie’s medical and treatment expenses as well as raise cancer awareness as a whole.

The initial release for Art of Magic is said to be a one-and-done release. Recently, VRCG announced plans for an Art of Magic 2 – this will be a Cameroon wrapped cigar that is coming out of the American Caribbean factory.

In the interim, we turn our attention to the Art of Magic and see what this cigar brings to the table.

The Art of Magic features a Mexican San Andres wrapper over all-Nicaraguan tobaccos for the binder and filler featuring tobaccos from the Aganorsa farms. As mentioned above, production is handled out of Aganorsa Leaf’s TABSA factory in Estelí, Nicaragua.

The Art of Magic is offered in one size – a 6 x 52 Toro. The cigar is presented in ten-count boxes. According to VRCG, 200 boxes of the cigars were produced. 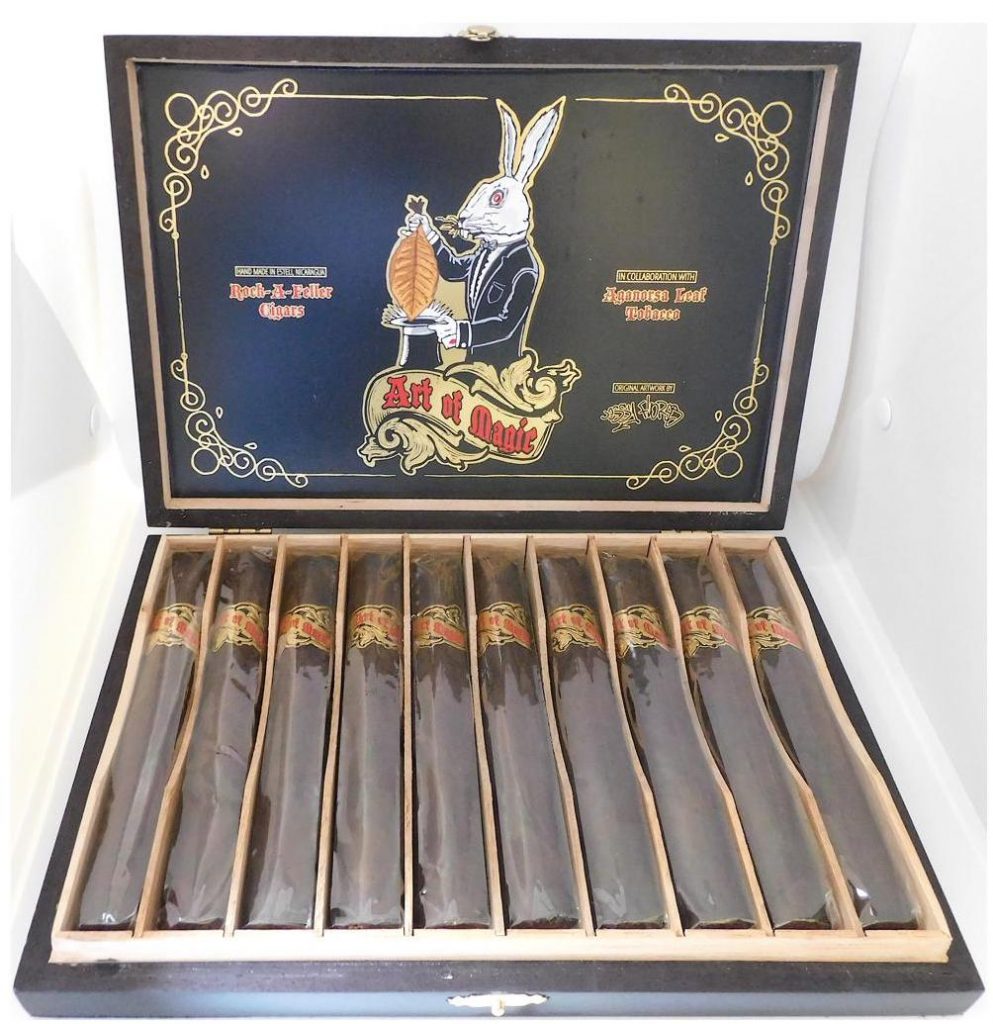 The San Andres Mexican wrapper of the Art of Magic had a chocolate-brown color to it. Upon closer examination, there was some mottling that could be seen on the dark surface. There was a slight amount of oil on the surface of the wrapper as well. There were some visible veins, but the dark color of the wrapper did a good job of hiding the wrapper seams. The wrapper had a slightly bumpy surface. 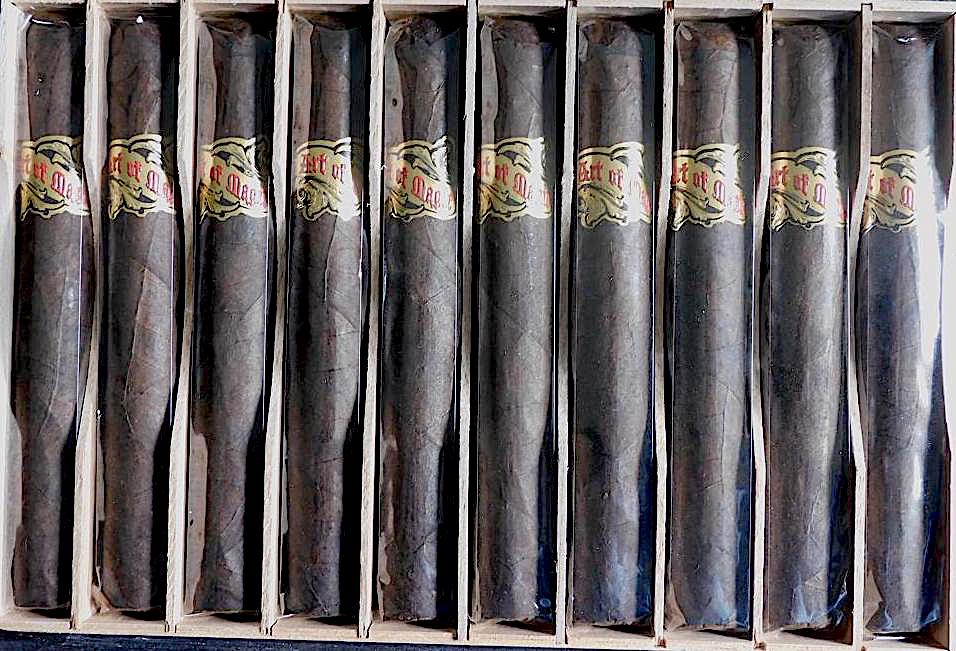 The band to the Art of Magic was black and gold. On the center of the band was a gold ribbon-like design with the text “ART OF MAGIC” in red gothic font.

Prior to lighting up the Art of Magic, a straight cut was used to remove the cap of the cigar. From that point, it was on to the pre-light draw experience. The cold draw delivered a mix of mocha (a fusion of coffee and chocolate), earth, and a “maduro sweetness” (natural tobacco and dried fruit). I considered this to be a very good pre-light draw experience. It was now time to toast up the foot of the Art of Magic and move on to the smoking phase.

The Art of Magic opened up with notes of mocha, cherry, mixed pepper and wood. Early on the mocha notes moved into the forefront. The mocha had a bakery chocolate sweetness quality to it. Meanwhile, the cherry, pepper, and wood settled in the background. As the cigar burned through the first third, the chocolate and coffee components of the mocha alternated in intensity. Additionally, there was a layer of pepper on the retro-hale.

Once into the second third of the Art of Magic, the chocolate and coffee components continued to alternate in intensity. The coffee became more and more prominent and by the midway point, the chocolate component had dissipated and was replaced by a full coffee note. Meanwhile the cherry, wood, and pepper notes remained in the background.

The final third of the cigar experience saw the coffee note remain in control. There was a slight increase in the pepper notes on the tongue – giving this cigar a little more in the way of spice. In the background were still notes of cherry and wood. This is the way the smoking experience of the Art of Magic finished up. The resulting nub was soft to the touch and cool in temperature.

The Art of Magic did require some touch-ups along the way to maintain a straight burn path and straight burn line. The touch-ups did the trick, but they were needed a little more frequently than I prefer. The resulting ash had a silver gray color to it. This wasn’t an overly firm ash, but it wasn’t loose nor flaky either. The burn rate and burn temperature were both ideal. 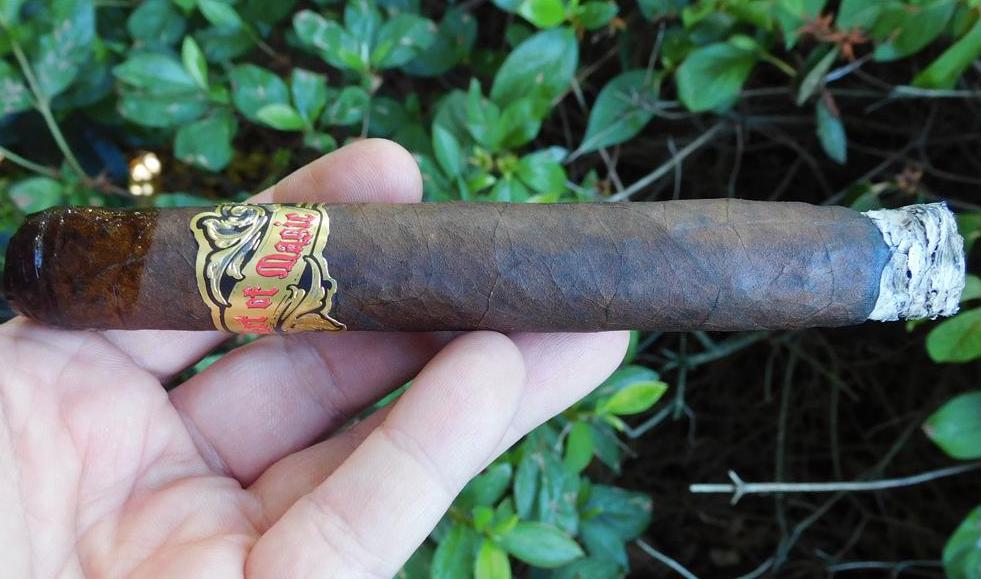 The draw to the Art of Magic was ideal. It had a touch of resistance to it – which is something that is in the sweet spot for me. This was also a low-maintenance cigar to derive flavor from.

The Art of Magic started out with medium strength and medium body. There wasn’t much in the way of variance of the intensity levels throughout the smoking experience. Both the strength and body balanced each other nicely with neither attribute overshadowing the other.

When the review process is taking place, I usually try to avoid any conversation with the company or brand unless I have specific questions on the review. It turns out I ran into Kevin Schweitzer in person last month as I was still in the review cycle, and I really couldn’t avoid the subject of this cigar. However, the conversation wasn’t in terms of the review itself. Kevin asked my thoughts on what the cigar experience reminded me of. My response to him was this was an absolute throwback to the Casa Fernandez Miami Maduro and Casa Fernandez Aganorsa Leaf Maduros of about six or seven years ago. His response to me was this was exactly what he was going for. This was perhaps the differentiator of this cigar.

One other quick side note. The artwork on this box was spectacular. When you see this in person, you will really appreciate the effort that went into the packaging.

I loved the old school Casa Fernandez Maduro style of this blend. It excelled in the category that matters the most – flavor. At $20.00, it’s not inexpensive, but I also felt I got my money’s worth from this cigar – and there is a charity giveback component. It’s a cigar that I could recommend to any cigar enthusiast, but also feel it would be more appreciated by a seasoned cigar enthusiast. As for myself, this is a cigar I would smoke again and put my money where my mouth is for a box purchase. At 92 points, it far exceeds the threshold for the Cigar Coop Standard of Excellence.