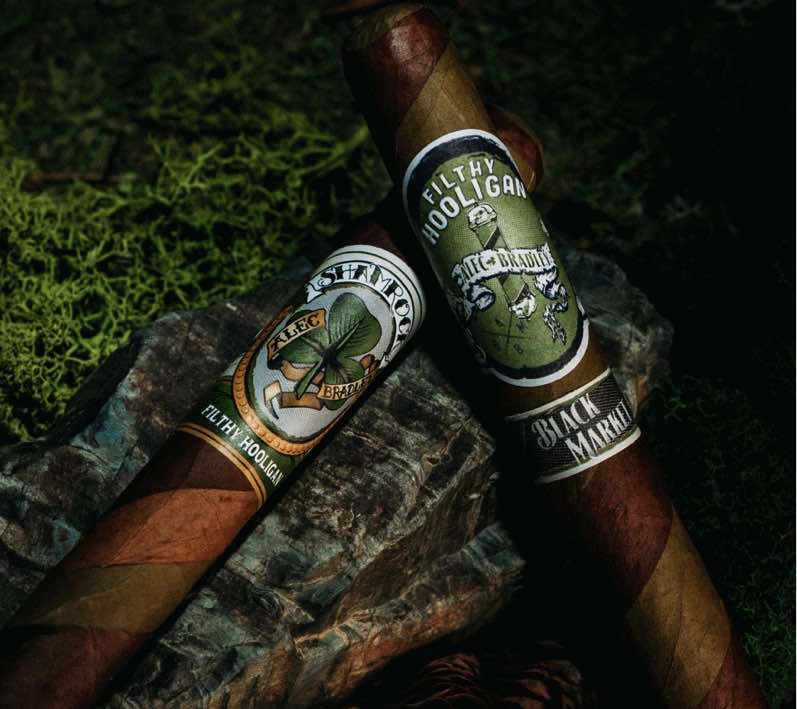 The Filthy Hooligan also features a Sumatran binder, as well as Panamanian and Honduran fillers. The cigar comes in one size – a 6 x 50 Toro and is presented in 24-count boxes. Production is limited to 2,000, 24-count boxes (48,000 cigars). Pricing is set at $11.15 per cigar domestically with pricing varying on the international market.

Alec Bradley Black Market Filthy Hooligan Shamrock is triple-wrapped with the same Candela wrapper as the Filthy Hooligan, accentuated by Nicaraguan Habano Maduro and Habano Natural wrapper leaves. The Shamrock was first introduced in 2019 and the 2021 edition marks the fourth annual installment.

The Shamrock also features a Sumatra binder, as well as Panamanian and Honduran fillers. The cigar comes in one size – a 6 x 50 Toro and is presented in ten-count boxes. Production is limited to 1,500, ten-count boxes (15,000 cigars). Pricing is set at $13.25 per cigar domestically with pricing varying on the international market.

“Hooligans have become a perpetual conversation piece for the cigar community,” said Alec Bradley founder, Alan Rubin. “Anticipation is built up by our brand advocates year over year, ahead of a release. Because of that, more smokers are finding the opportunity to experience the unique flavor characteristics that candela tobacco can bring to a blend.”

Both Filthy Hooligan cigars are being produced at Tobacos De Oriente in Danlí, Honduras. Shipping for both cigars is expected to take place in February 2022.