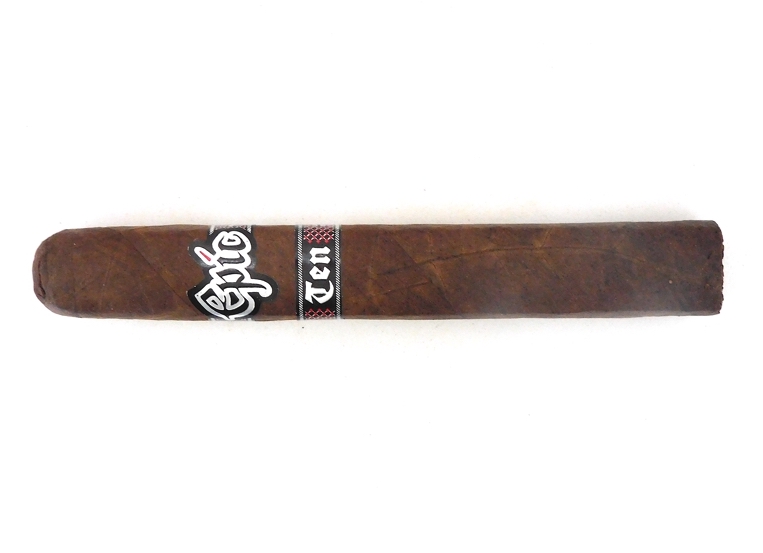 In 2020, Dean Parsons celebrated the tenth anniversary of his brand, Epic Cigars. As is the case with many when it comes to celebrating a milestone in the cigar business, Parsons wanted to release a commemorative cigar to mark the occasion. For most of his tenure in the cigar industry, Parsons had been handling his production out of the Charles Fairmorn factory in the Dominican Republic. For his tenth anniversary cigar, Parsons decided to switch things up and team up with AJ Fernandez and produce the cigar in Nicaragua. The result was the Epic Ten, a limited edition cigar that started hitting the stores late in 2020. Today we take a closer look at this cigar. 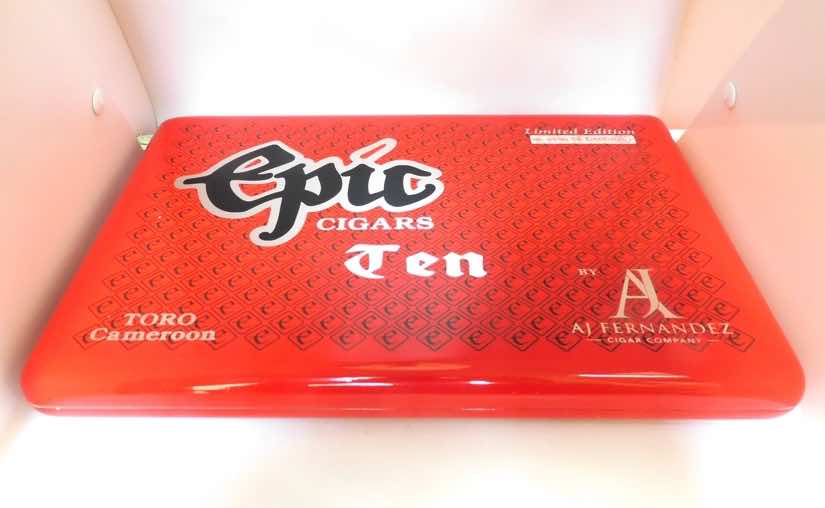 Epic Cigars was founded by Parsons in 2010. Early in 2019, Parsons sold the brand to Zander-Greg, a large distributor that also carries its own cigars – most notably the Nat Cisco line. In his new role, Parsons continues to spearhead Epic Cigars while also representing the Zander-Greg cigar brands. Epic Ten is the first project Parsons release since joining Zander-Greg. 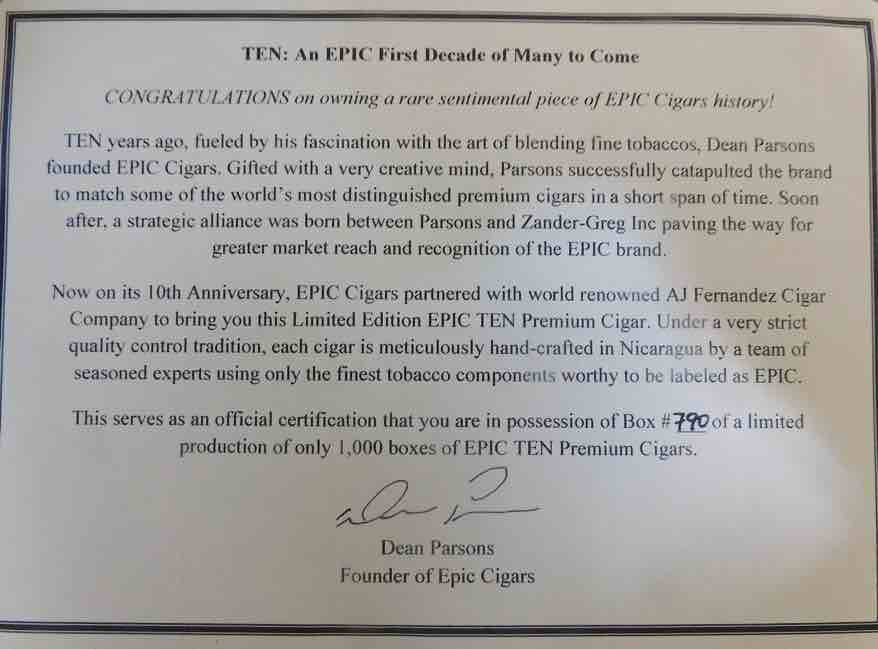 Without further ado, let’s break down the Epic Ten and see what this cigar brings to the table.

The Epic Ten is available in one size – a 6 x 54 Toro. The cigars are presented in ten-count boxes with a total allocation of 1,000 numbered boxes made available. The box that contained the cigars for this assessment was #790. 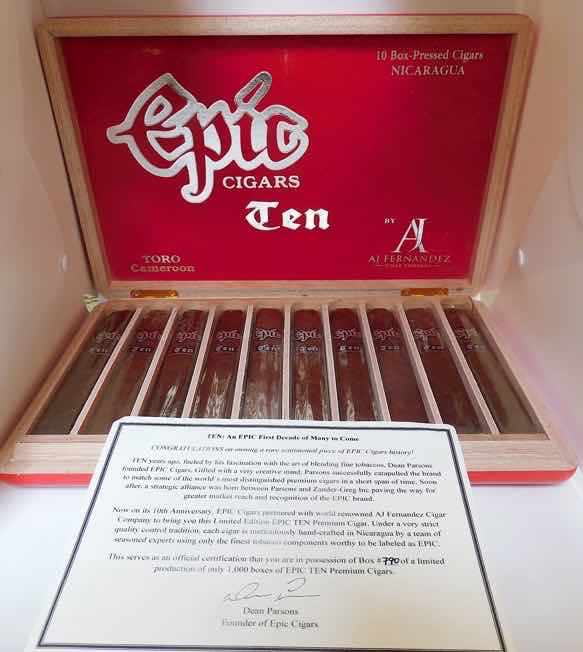 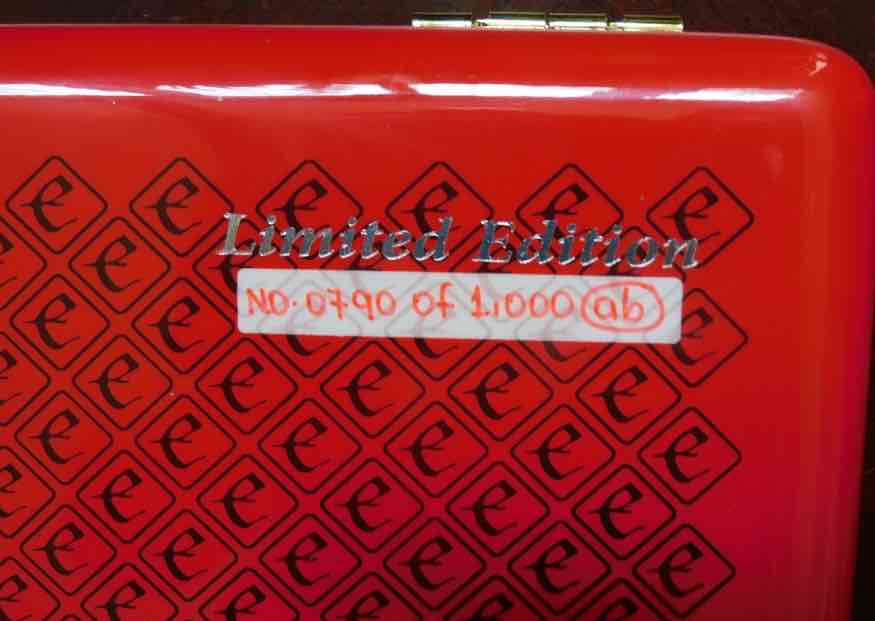 The Cameroon wrapper of the Epic Ten had a caramel color with a slight dark shade to it. There was some mottling and oil on the surface of the wrapper. There were some visible veins, but the wrapper seams were not very noticeable. This was also a cigar with a sharp box-press to it. 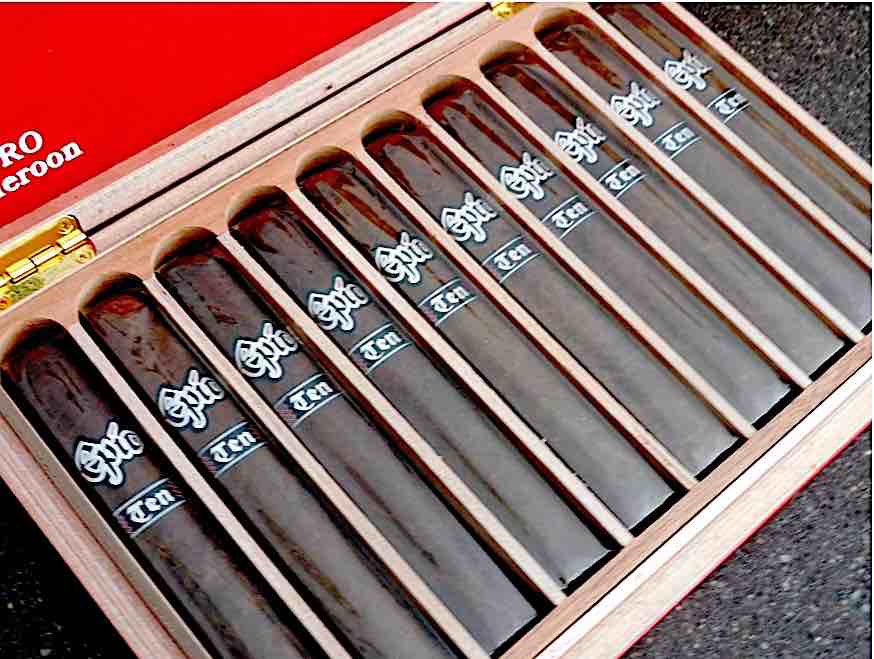 Prior to lighting up the Epic Ten, a straight cut was used to remove the cap. Once the cap was removed, it was on to the pre-light draw ritual. The cold draw delivered a mix of wood, sweet natural tobacco, and black pepper. Overall this was a satisfactory pre-light draw. At this point it was time to light up the Epic Ten and see what the smoking experience would bring.

The Epic Ten kicked off with notes of earth, mixed pepper, citrus, and mineral notes. As the cigar settled into the burn of the first third, the earth notes became primary. The pepper, citrus, and mineral notes settled into the background with the pepper varying at different degrees of intensity. Meanwhile, there was an additional layer of red pepper. While I’m pointing out notes of spice, this cigar was not a spice bomb.

The final third saw a quick increase in the pepper notes. Both the pepper and mineral notes closed in on the earthy notes but didn’t quite move into primary flavor territory. There still were citrus notes in the background rounding out the flavor profile. As the cigar experience came to a close, the resulting nub was soft to the touch and lukewarm temperature.

The Epic Ten did need several touch-ups along the way in order to maintain a straight burn path and burn line. The touch-ups did the trick, but there were more touch-ups than I prefer. As for the ash, it was charcoal-gray. This wasn’t an overly firm ash, but it wasn’t a loose or flakey ash. The burn rate was ideal. As for the burn temperature, it also remained ideal but got lukewarm toward the very end. 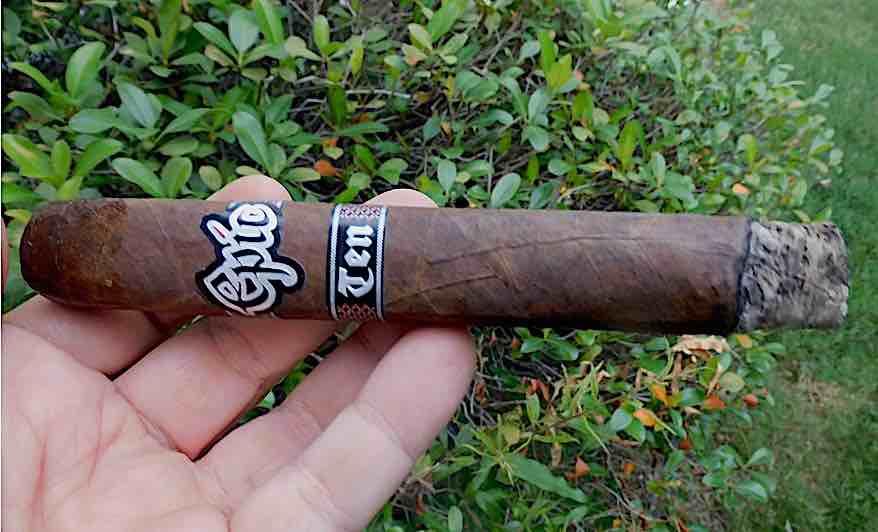 Many times a box-pressed cigar has a draw that is way too open. This was not the case with the Epic Ten. There was a hint of resistance which made for an ideal experience. The Epic Ten was not a cigar that was difficult to derive flavor from.

The Epic Ten started out as a medium strength, medium-bodied cigar. As the cigar experience progressed, there was a gradual increase in intensity on both attributes. By the second half the strength and body moved into medium to full territory where it remained for the duration of the smoking experience.

I’ll start with final thought that doesn’t factor into the assessment rating or score. I’m all in favor of companies expanding horizons and producing cigars in other factories and countries. In the case of Epic and Dean Parsons, I’m all in with a cigar being made at AJ Fernandez Cigars. However when it comes to milestone and commemorative cigars, I’m all in favor of working with the factory that got you to the dance in the first place. I would have loved to see a cigar come out of Charles Fairmorn. This isn’t a unique case with Epic. It seems to be happening more and more with many companies.

That being said, the Epic Ten did provide an enjoyable smoking experience. It wasn’t overly complex, but it did have nice flavor and was well balanced. While it comes in at a respectable 89, score it still carries a steep price point at $16.00. My recommendation would be to try this cigar first and see if the flavor profile meshes.