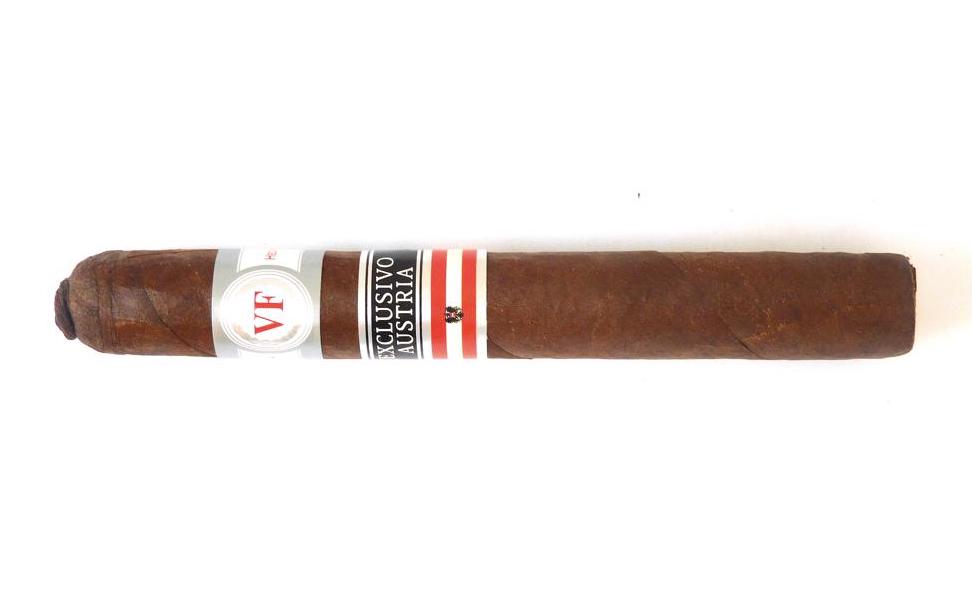 In 2021, VegaFina would release a regional cigar to Austria known as the VegaFina Vindobona Exclusivo Austria. VegaFina is a brand sold by Tabacalera S.L.U. group, which is a sister operation to Tabacalera USA, the group that owns the brands under Altadis USA. While VegaFina is a brand that has been primarily distributed in the European market, there have been several VegaFina releases that have been distributed. by Altadis USA. Still VegaFina has been a brand that has been more popular in the European market. Today we will look at the VegaFina Vindobona Exclusivo Austria, the regional release sold exclusively in Austria.

At press time, there have been six regional “Exclusivo” releases from VegaFina. Each has been in a unique for the region. There have been variations of the blend along the way.

Without further ado, let’s break down the VegaFina Vindobona Exclusivo Austria and see what this cigar brings to the table.

The VegaFina Vindobona Exclusivo Austria comes in one size – a Toro measuring 50 x 159 mm (very close to the classic 50 x 6 1/4 Toro size). The cigar is presented in ten-count boxes. A total of 1,230 boxes were produced and each box is numbered with a special silver plate. The number 1230 refers to the year of the creation of the Austrian flag. 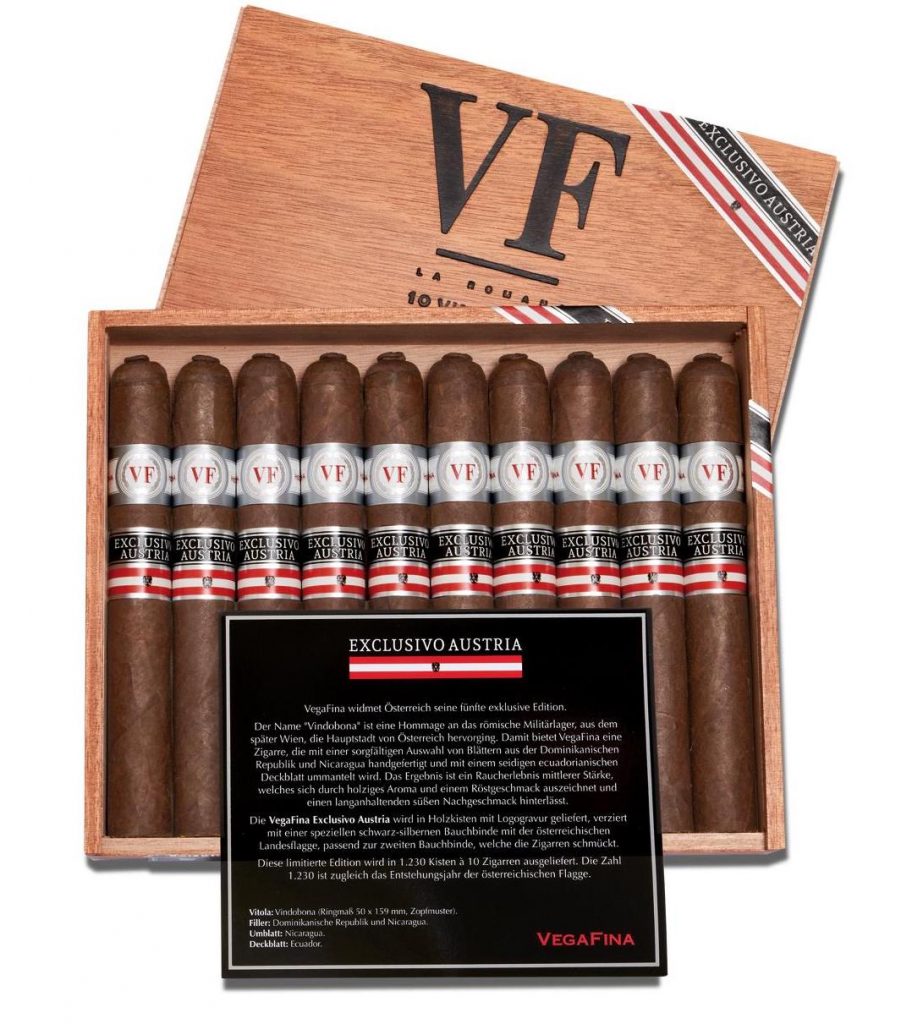 The Ecuadorian wrapper of the VegaFina Vindobona Exclusivo Austria had a dark cinnamon color to it. Upon closer examination, there was some mottling present on the surface. The wrapper also had a light sheen of oil on it. There were some thin visible veins, and most of the wrapper seams were also on the thinner side. The cap is finished with a swirled pig-tail bun cap.

There are two bands on the VegaFina Vindobona Exclusivo Austria. The primary band has a white background with silver trim. On the center of the band is a red “VF” surrounded by a silver wreath which in turn is surrounded by a series of silver concentric circles. The left side of the band has the text “VEGAFINA” in red font while the right side has the text “HECHO A MANO” in red font.

As opposed to pulling off the swirled pig-tail cap, a straight cut was used to remove both the cap of the VegaFina Vindobona Exclusivo Austria. Once the cap was removed, it was on to the pre-light draw experience. The cold draw delivered a mix of natural tobacco, cedar, earth, and baker’s spice. The flavors were subtle and not overpowering. Overall the flavors really clicked well making for an excellent pre-light draw. At this point, it was time to toast up the foot of the VegaFina Vindobona Exclusivo Austria and move on to the smoking phase.

The start of the VegaFina Vindobona Exclusivo Austria picked up right where the pre-light draw left off with more notes of natural tobacco, cedar, baker’s spice, and earth. As the cigar progressed through the first third the natural tobacco moved into the forefront. The cedar, baker’s spice, and earth settled in the background, but all made a nice contribution to the overall flavor profile. Meanwhile, there was an additional layer of sweetness on the retro-hale mixed in with some black pepper.

The second third of the VegaFina Vindobona Exclusivo Austria saw the natural tobacco notes remain grounded in the profile. During this stage, some black pepper surfaced on the tongue in the background and gradually began to increase. At the same time, the cedar, baker’s spice, and earth notes remained, providing complementary flavors along the way.

The last third still saw the natural tobacco notes in the forefront as well as the same flavors in the background as the previous third. The one difference is the pepper notes were more prominent than the others. This didn’t create an overly spicy profile because the flavors were very much dialed back. The VegaFina Vindobona Exclusivo Austria finished up each time with a firm, cool nub.

The burn of the VegaFina Vindobona Exclusivo Austria performed excellently. The cigar primarily maintained a straight burn line and straight burn path. Once in a while, there was a little jaggedness, but this was more cosmetic than anything. The resulting ash was silver-gray with some dark spots in it. This was an ash that was on the firmer side. The burn temperature was ideal. The burn rate was slower than normal, but that was a reflection of a tighter draw (see next section). 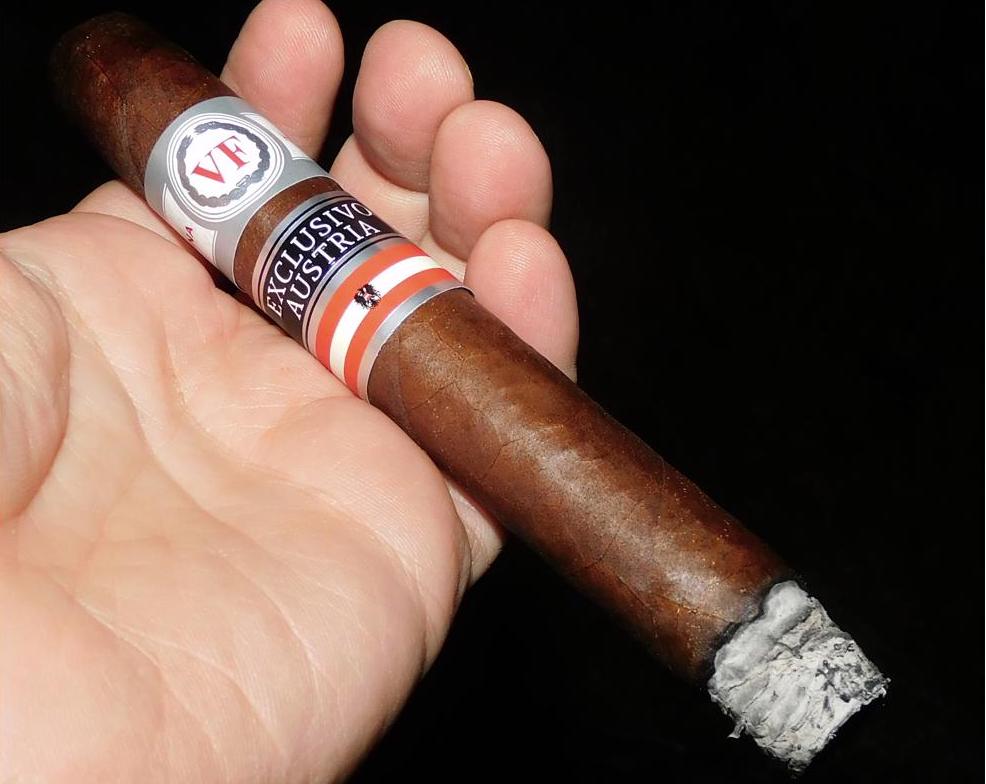 If you have read Cigar Coop reviews, normally I enjoy a little resistance on the draw. In the case of the VegaFina Vindobona Exclusivo Austria, the draw was much tighter than I prefer. While the cigar didn’t go out, this was a draw I had to work much harder than I prefer.

While sometimes VegaFina has tried to push the envelope for a bolder smoke, the brand is known for its milder profile. This is exactly what the VegaFina Vindobona Exclusivo Austria delivers. This is a cigar that is mild in strength from start to finish. The flavors are in the mild to medium range. There wasn’t much in the way of variance of the strength and body along the way.

In terms of strength versus body, the body maintained a slight edge from start to finish.

This is a great example of what VegaFina does well. They are able to deliver a mild smoke with nuanced and balanced flavors that keep you. interested throughout. This isn’t a cigar that will have much in the way of transitions, but the flavor nuances are what shine. The tighter-than-average draw wasn’t a showstopper, but it is fair to say it did impact the scoring. This is a cigar that I would recommend to any cigar enthusiast any time of the day. As for myself, this is a cigar I most certainly would buy and smoke again. You will have to seek out a retailer (most likely in Austria) that has it. However, it’s well worth it because at 90 point, this earns the Cigar Coop Standard of Excellence designation.