The name Liga F is meant to represent “Liga Fuerte.”  “Fuerte” means strong and strength is the theme Casa Magna Liga F. In 2022 the Quesadas would release another cigar out of the Dominican Republic for Casa Magna line known as the Casa Magna Connecticut. This cigar had the goal of addressing the opposite end of the spectrum for a milder offering. 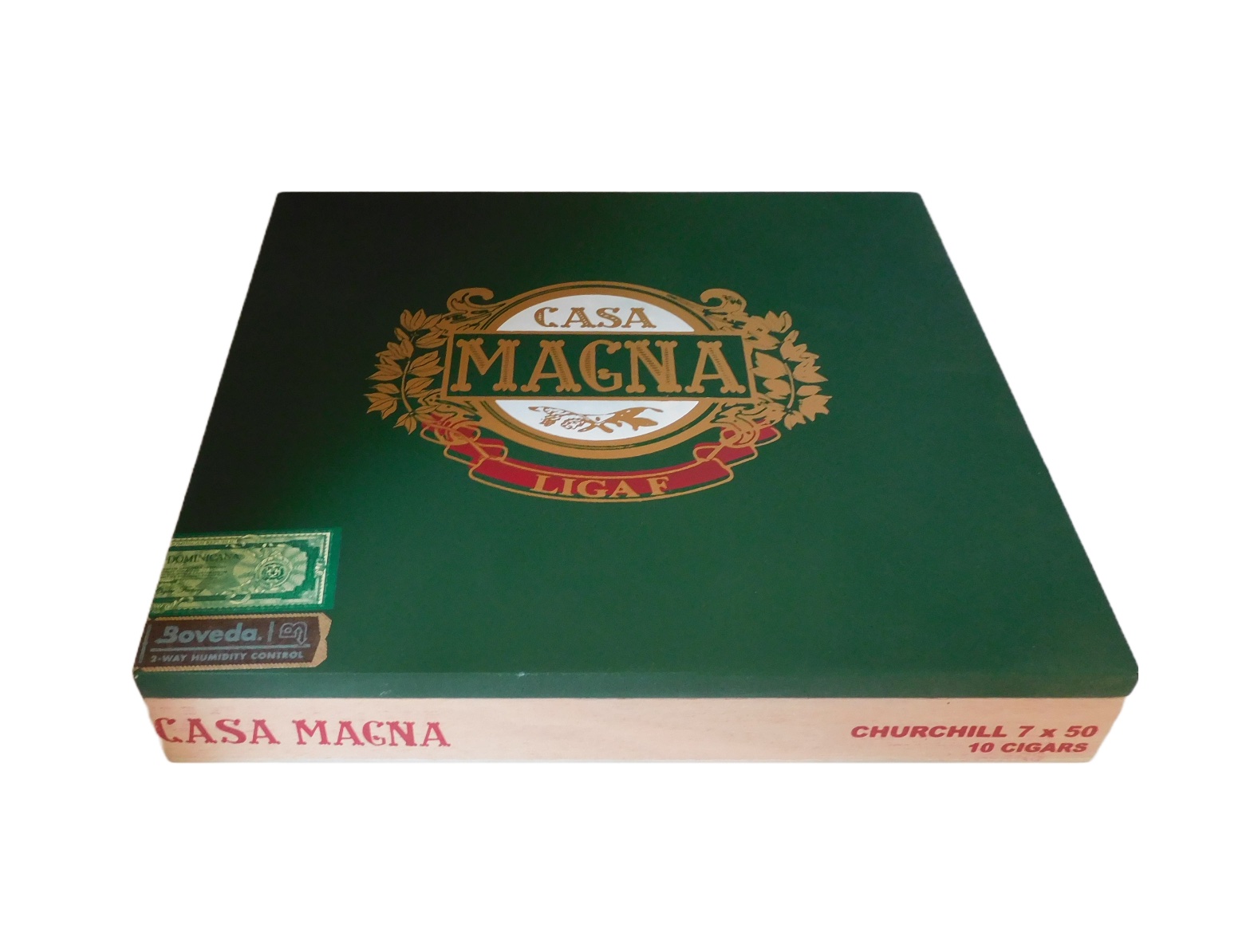 For now, let’s turn our attention to the Casa Magna Liga F Churchill and see what this cigar brings to the table.

The blend for the Casa Magna Liga F features a sun-grown Ecuadorian Corojo wrapper. There are Dominican tobaccos used for binder and filler. In addition, some Nicaraguan tobaccos are incorporated into the filler.

The Casa Magna Liga F is available in four sizes. All of the sizes are presented in ten-count boxes except for the Petit Corona which is presented in five-count packs. 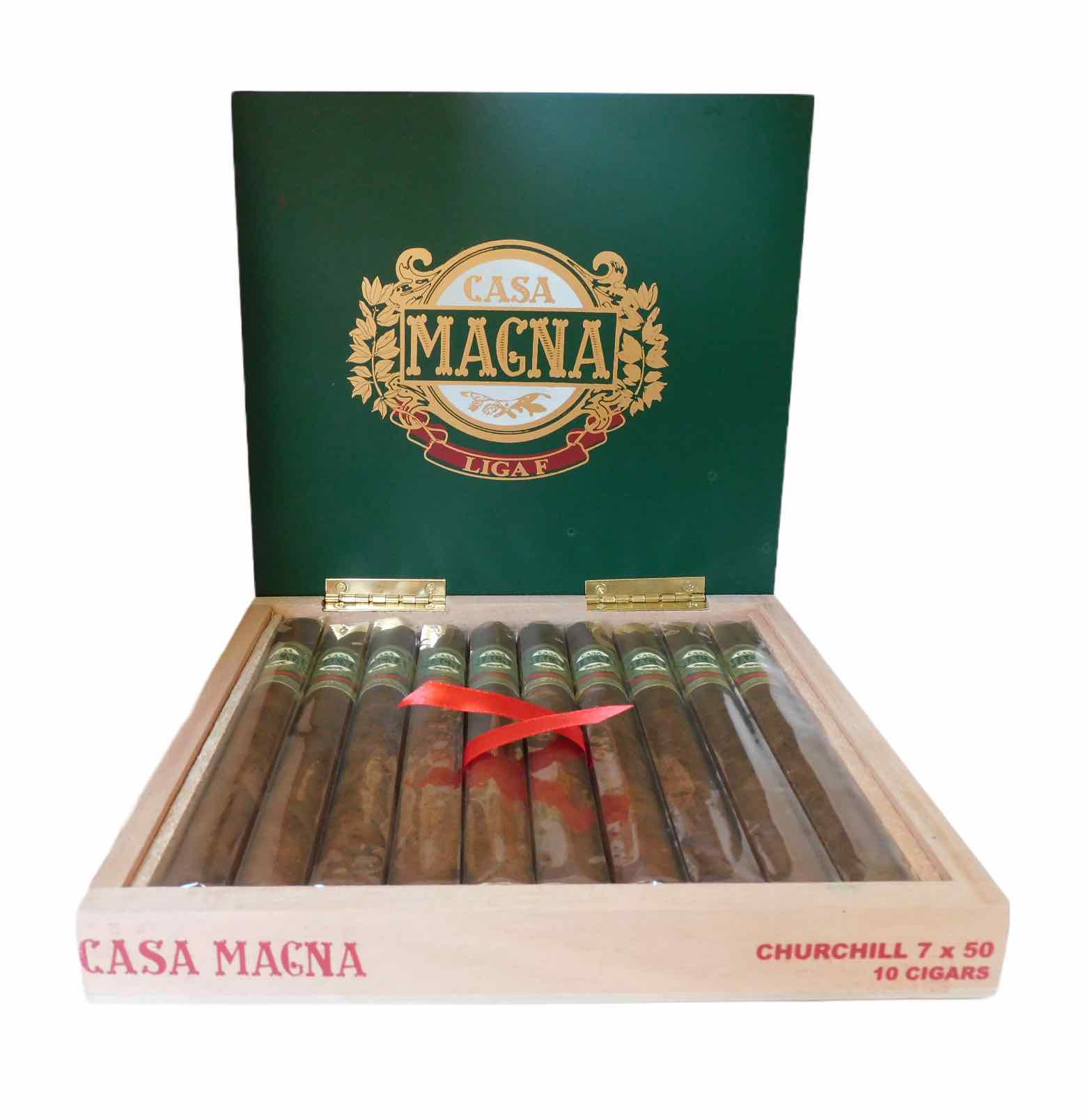 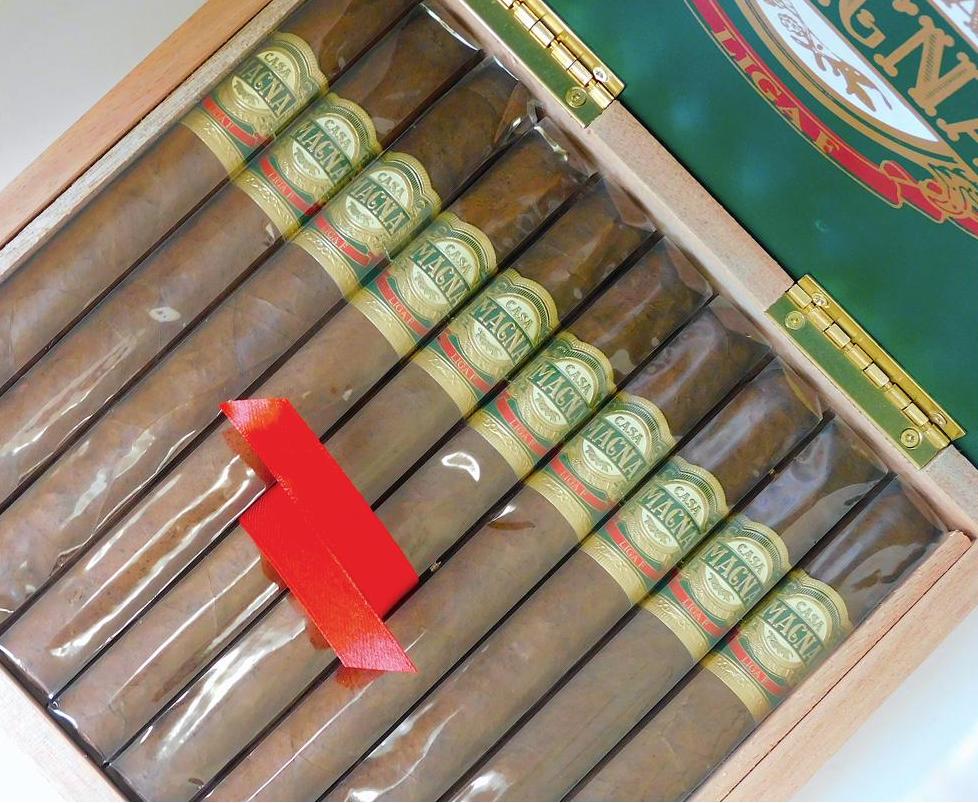 A straight cut was used to commence the cigar experience of the Casa Magna Liga F Churchill. Once the cap was removed, it was on to the pre-light draw. The cold draw delivered a mix of sweet bread, natural tobacco, dusty earth, and a slight pepper note. To me, this was an excellent pre-light draw experience. At this point, it was time to toast up the footer of the Casa Magna Liga F Churchill and see what the smoking phase would have in store.

The Casa Magna Liga F started out with a combination of sweet bread, natural tobacco, nuts, earth, and black pepper. Early on the breadiness settled in the forefront. The natural tobacco, nuts, earth, and black pepper settled in the background. Some notes of cedar and baker’s spice emerged in the background. There was a slight dialing back of the sweetness from the bread notes. Meanwhile, the retro-hale delivered notes of black pepper and wood.

The start of the second third saw the bread notes remain in the forefront. The sweetness started to ramp up again and this continued to the midway point. Once past the midway point, the sweetness came down. It was around the midway point where the natural tobacco notes displaced the baker’s spice as the primary note. At the same time, the pepper increased on the retro-hale and tongue. Going into the second third, the natural tobacco notes were primary. These were rounded off by the bread, pepper, baker’s spice, and cedar. There also was a slight creamy almond note.

The final third saw the cedar notes go primary with a musty component. The natural tobacco, bread, and pepper notes rounded things out. The pepper actually dialed back a bit on the retro-hale and tongue. Meanwhile, the baker’s spice and creamy almond notes diminished. Sometimes when a cigar takes a heavy cedar turn, it can ruin the cigar experience, but no such issue here. This cigar finished quite pleasantly with a firm nub that was cool in temperature.

The Casa Magna Liga F Churchill did not require much in the way of touch-ups. The cigar maintained a straight burn path and straight burn line for most of the cigar experience. The resulting ash had a salt and pepper color. This was an ash that was on the firm side. As for the burn rate and burn temperature, both had ideal levels. 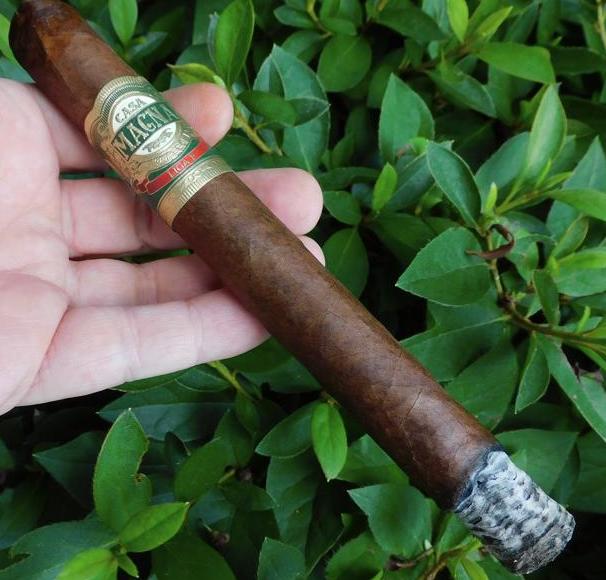 The draw to the Casa Magna Liga F Churchill also performed stellarly. This was a cigar that had a touch of resistance – which is something that I like. At the same time, this was a low-maintenance cigar to derive flavor from.

It took a little bit of time, but the Liga F Churchill would live up to its billing.

As for strength versus body, the body had the edge in the first two-thirds, but the strength took a slight edge during the final third.

I’ll challenge anyone who says the Quesada factory is not producing some of the best cigars out there over the past 18 months. The Casa Magna Liga F Churchill is another hit that comes out of this factory. It delivers the total package: flavor, complexity, and excellent construction. The Churchill size is a wonderful expression of this brand. Sometimes the flavors die out late in a Churchill, but not with the Casa Magna Liga F Churchill. One final note. This is a Dominican-made cigar that has a Nicaraguan flair to it – making it fit in nicely with the Casa Magna brand.

This is probably a cigar I would steer toward a more seasoned cigar enthusiast. As for myself, this is not only a cigar I would smoke again, but for $100.00, buying a box is a no-brainer. Coming in at 91 points, the Casa Magna Liga F Churchill exceeds the Cigar Coop Standard of Excellence threshold.

Back in December 2021; Ben Lee and I featured this cigar on the Quesada Corner.