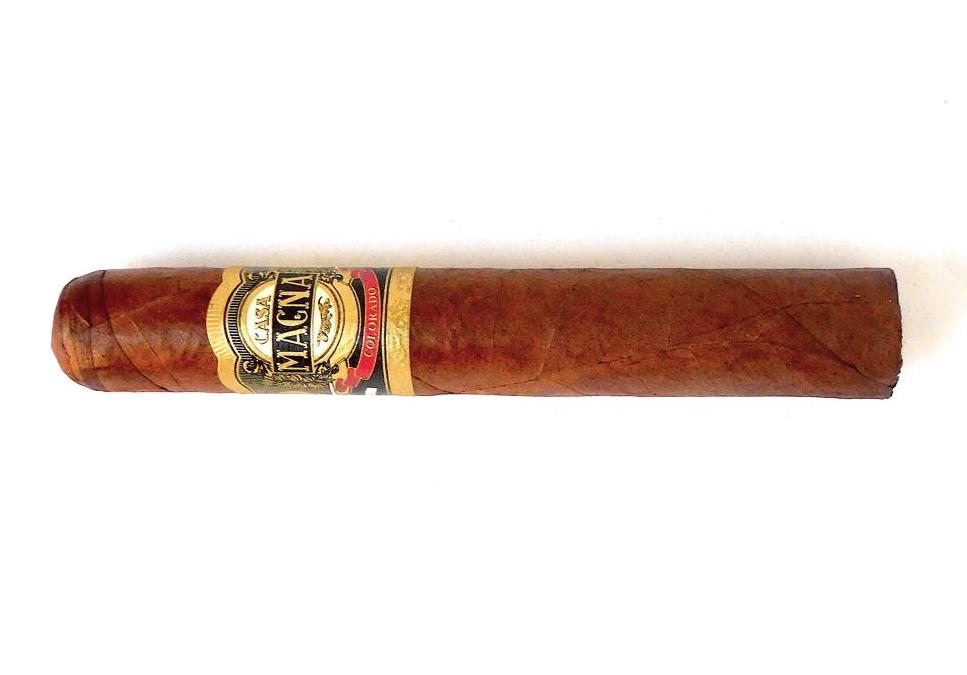 The word collaboration is one that is thrown around quite a bit in the cigar industry, and when it’s used, many will point out how such projects have often failed. But one big collaboration success has been the Casa Magna Colorado series. The project would bring together two titans in the cigar industry, Manuel Quesada (of Quesada Cigars) and Nestor Plasencia Sr. (of Plasencia Cigars). It would be a cigar produced in Nicaragua by the Plasencia family but distributed by the Quesadas (under their S.A.G. Imports umbrella). The Casa Magna Colorado would be a massive hit – especially after it captured the Cigar Aficionado #1 Cigar of 2008. It also springboarded Casa Magna from a line to a full-fledged brand. Today, we take a look at the Casa Magna Colorado in the Robusto size – which was the size that won the Cigar Aficionado #1 Cigar of the Year award.

In addition, Plasencia and Quesada have teamed up for other releases including Fonseca Nicaragua, Quesada Keg, and some of the Oktoberfest releases. But for now, let’s turn our attention to the Casa Magna Colorado Robusto and see what this cigar brings to the table.

In addition to the Casa Magna Colorado being made at the Plasencia factory in Nicaragua, this is a cigar that features 100% Nicaraguan tobaccos highlighted by a shade-grown Colorado wrapper.

Over the years, there has been a large number of vitolas offered. The following are ones listed on the Quesada Cigars website.

The following are other sizes offered

The box counts vary by size. The Casa Magna Colorado Robusto is presented in 27-count boxes.

There is no doubt that the name “Colorado” fits this cigar as there is a distinctive reddish hue to this wrapper. There was some slight mottling on the surface of the wrapper. This was also a wrapper that had an oily complexion. There were some visible veins and some thin visible wrapper seams.

Prior to lighting up the Casa Magna Colorado Robusto, a straight cut was used to remove the cap of the cigar. Once the cap was removed it delivered notes of leather, cedar, and an unknown note that I could not put my finger on until my colleague Ben Lee said it was Cumin. Overall this was a satisfactory pre-light draw. At this point, it was time to toast up the Casa Magna Colorado Robusto and see what the smoking phase would have in store.

The start of the Casa Magna Colorado Robusto kicked off with notes of natural tobacco, earth, nut, cedar, black pepper, and more cumin. Early on the natural tobacco and nut flavors moved into the forefront with the cedar, earth, pepper, and cumin in the background. The cumin flavor had less of a role than in the pre-light stage and slowly started to diminish. Midway through the first third, some coffee notes emerged. Meanwhile, on the retro-hale, there was an additional layer of black pepper.

The second third of the Casa Magna Colorado Robusto saw the black coffee notes increase while the natural tobacco notes decreased. The black coffee worked its way into a primary note joining the nut. The natural tobacco, cedar, pepper, and earth rounded things out. Later in the second third, the nuttiness subsided. Meanwhile, there was less in the way of pepper on the retro-hale, and more in the way of sweetness, saltiness and nuttiness on the retro-hale.

The final third saw the coffee notes still in control, but there was a creaminess that emerged on both the tongue and the retro-hale. There still were notes of black pepper, cream, nut, and natural tobacco. This is the way the Casa Magna Colorado Robusto finished up. The resulting nub was firm to the touch and cool in temperature.

Overall the Casa Magna Colorado Robusto performed extremely well with its burn. This cigar had no problem maintaining a straight burn path. There was a slight amount of jaggedness on the burn line, but that didn’t warrant any additional touch-ups and seemed to correct itself. The ash had a light gray color. The ash skewed toward the firmer side. The burn rate and burn temperature were both ideal. 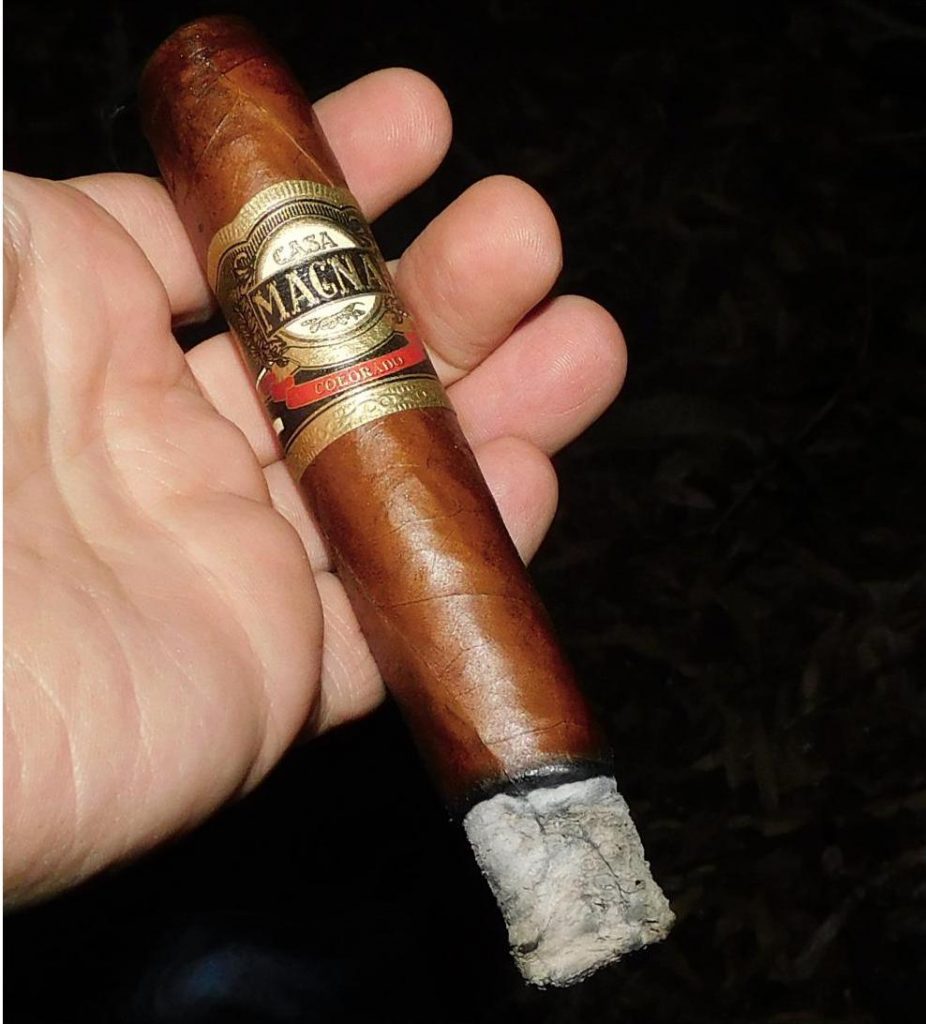 The draw to the Casa Magna Colorado Robusto had a touch of resistance – making it an ideal draw in my book. At the same time, this was a cigar that was low maintenance in terms of deriving flavor from the cigar.

In terms of strength and body, the Casa Magna Colorado Robusto started out dead-center medium. Toward the latter part of the second third, there was a spike in terms of the strength and body. This pushed the cigar into medium to full territory for both attributes.

When looking at strength versus body, a slight edge goes to the body.

Very simply, the Casa Magna Colorado Robusto fired on all cylinders throughout our review cycle here. This was the perfect storm of flavor, construction, and complexity. I was blown away by how good the last third of this cigar was because, in most cases, it is the less enjoyable part of the smoking experience. If you haven’t picked up a Casa Magna Colorado in a while, this is a must-have smoke. Everything also came together in the Robusto format.

Without a doubt, at 93 points this was the best performing cigar I’ve smoked this year. It’s the first 93 point score I’ve given out in almost 26 months. It easily surpasses the threshold for Cigar Coop Standard of Excellence. Unfortunately, 2008 releases aren’t eligible for Cigar of the Year consideration on Cigar Coop, but that shouldn’t discourage anyone from smoking them. It’s a cigar I’d recommend to almost any cigar enthusiast, any time of the day. This is not only a box worthy cigar to purchase, but it’s one I would fight Chuck Norris for.

Recently Ben Lee and I did Smoking Syndicate Video as a part of our Quesada Corner segment where we smoked the Casa Magna Colorado Robusto.