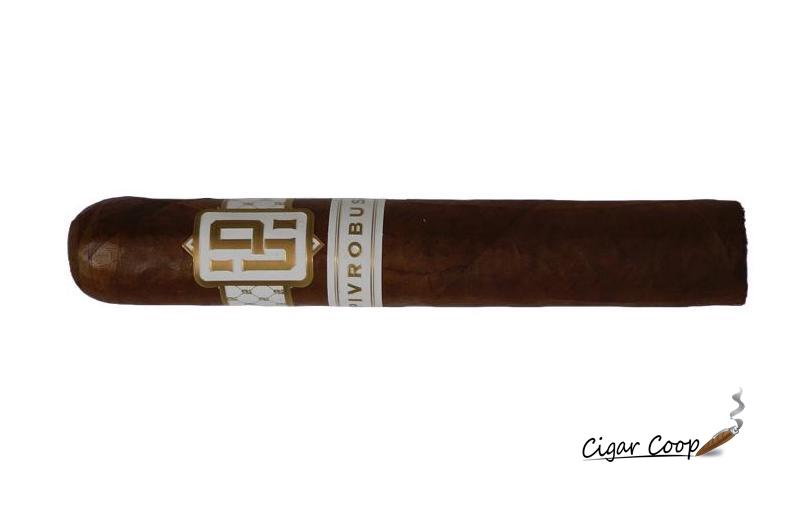 Late last year came word of a celebrity-branded cigar from Jeremy Piven. Piven is best known for the role of Ari Gold on the television series Entourage. Given it was known that Piven is a cigar enthusiast, it wasn’t terribly surprising that he would launch his own cigar, but who blended the cigar for him was more of a surprise. That person would be Dion Giolito of Illusione Cigars. Piven’s cigar was launched under the umbrella of “The Jeremy Piven Collection” and would see a single vitola released known as the PIV Robusto. Today we take a closer look at that cigar.

In terms of the cigar, it is not branded as an Illusione Cigar. It’s not a cigar that I’ve seen on the website, nor is it a cigar that has been showcased at our industry trade shows. I’m not aware of Giolito and Piven jointly promoting the cigar at events or podcasts. That doesn’t mean it won’t happen in the future. I find this interesting because many cigar companies have tried to leverage a celebrity-branded cigar to promote their own brand. 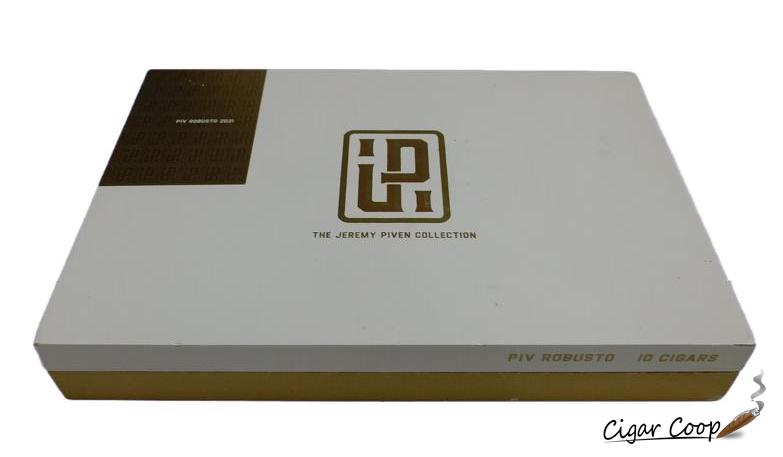 For now, let’s turn our attention to the PIV Robusto cigar and see what this cigar brings to the table.

The PIVRobusto was offered in one size – a 5 x 52 Toro. The cigars were presented in ten-count boxes. It is not clear whether additional sizes will be offered under the Jeremy Piven Collection umbrella. 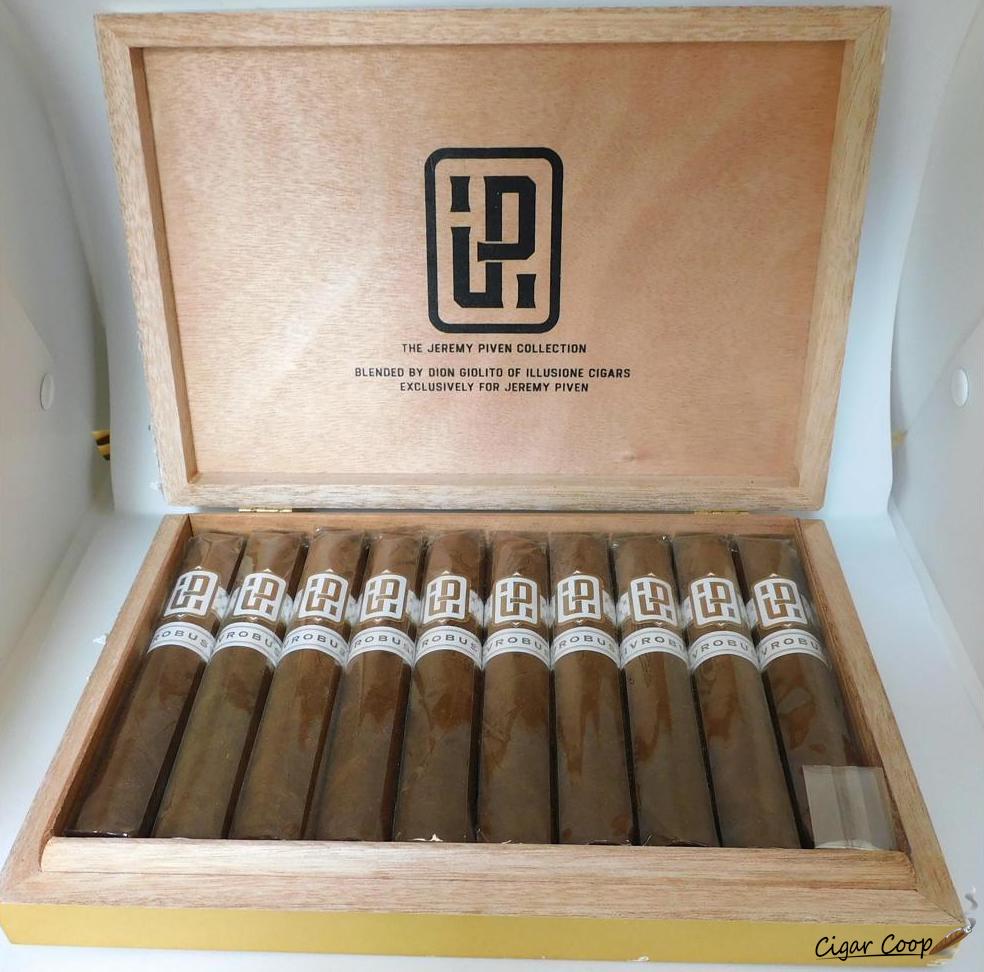 Open box of the PIV Robusto 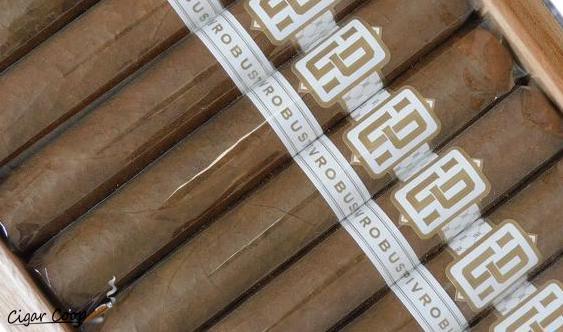 Close-up of the PIV Robusto

There are two bands on the PIV Robusto. Each band has a white background with gold font on the lettering and design elements. The center of the upper band has a design that appears to be an interlocking “JP” logo. The sides of the band have a wallpaper-like repeating pattern of smaller “JP.”

The secondary band rests just below the primary band. It has the text “PIVROBUSTO” on it.

Prior to lighting up the PIV Robusto, a straight cut was used to remove the cap of the cigar. Once the cap was removed, it was on to the pre-light draw experience. The cold draw delivered a mix of cedar, classic wood, and earth. Overall this wasn’t the most exciting pre-light draw. Since the pre-light draw is not factored into the score or value rating, there was no loss of points here. At this point, it was time to toast up the PIV Robusto and move on to the smoking phase.

The final third saw another small increase in the intensity of the pepper, but in the end, the cedar and earth remained primary. Meanwhile, there were still some notes of wood and natural tobacco  This it the way the PIV Robusto came to a close. The resulting nub was soft to the touch and cool in temperature.

The burn of the PIV Robusto required multiple touch-ups to maintain a straight burn path and straight burn line. The touch-ups did the trick. The resulting ash was a little inconsistent from sample to sample. On some cigars, it was almost white in color, on other samples it was darker. As for the burn rate and burn, both were ideal. 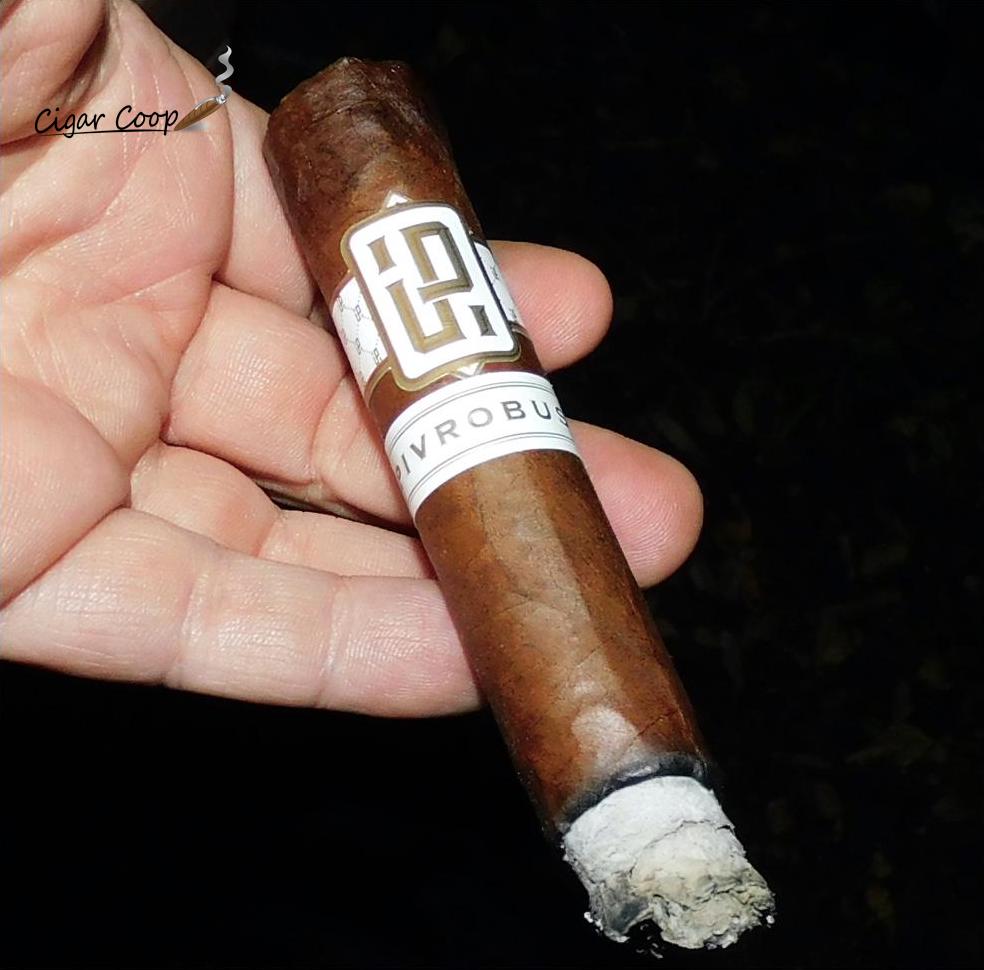 Burn of the PIV Robusto

I smoked about six samples of the PIV Robusto from the same box for this assessment. Three of the cigars had a draw more on the open side, the other had a draw that was tighter than I prefer. I normally prefer a draw with a touch of resistance, but in the case of the PIV Robusto none of the draws ended up in the sweet spot.

The PIV Robusto delivered a medium-strength, medium-bodied smoking experience from start to finish. There was a nominal increase in the intensity of the strength and body, but in the end, the PIV Robusto remained in the medium range of the spectrum for both attributes. In terms of strength versus body, both attributes balanced each other nicely with neither attribute overshadowing the other.

The PIV Robusto really started out promising with a nice amount of flavor nuances that seemed to complement each other quite well.  As the PIV Robusto moved into the second third, the cigar began to do something I am not a fan of – namely it became a more cedar-forward profile. By the final third, I found the balance of the cigar went awry and this cigar was less enjoyable. While not a bad cigar, I still expect a $14.95 to do better than score an 89. In the end, I’d recommend trying a sample first and seeing what you think.