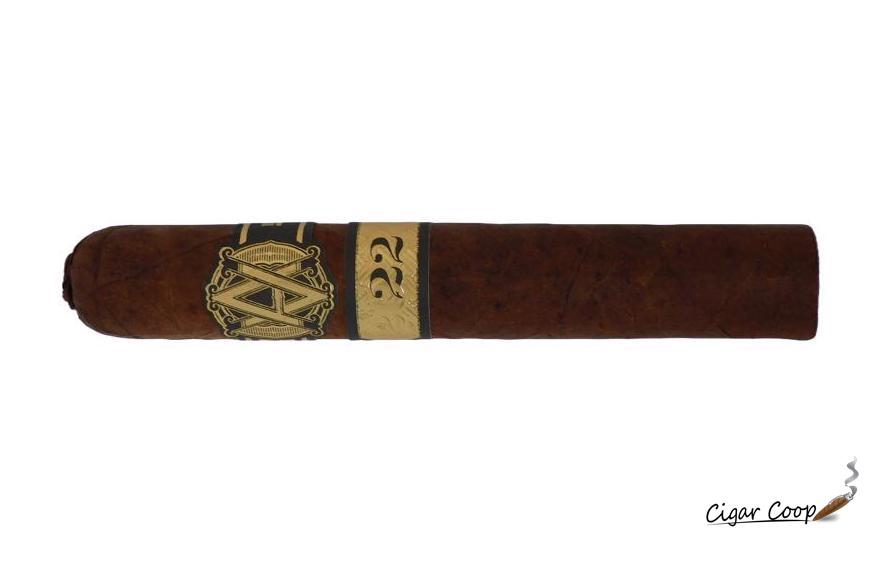 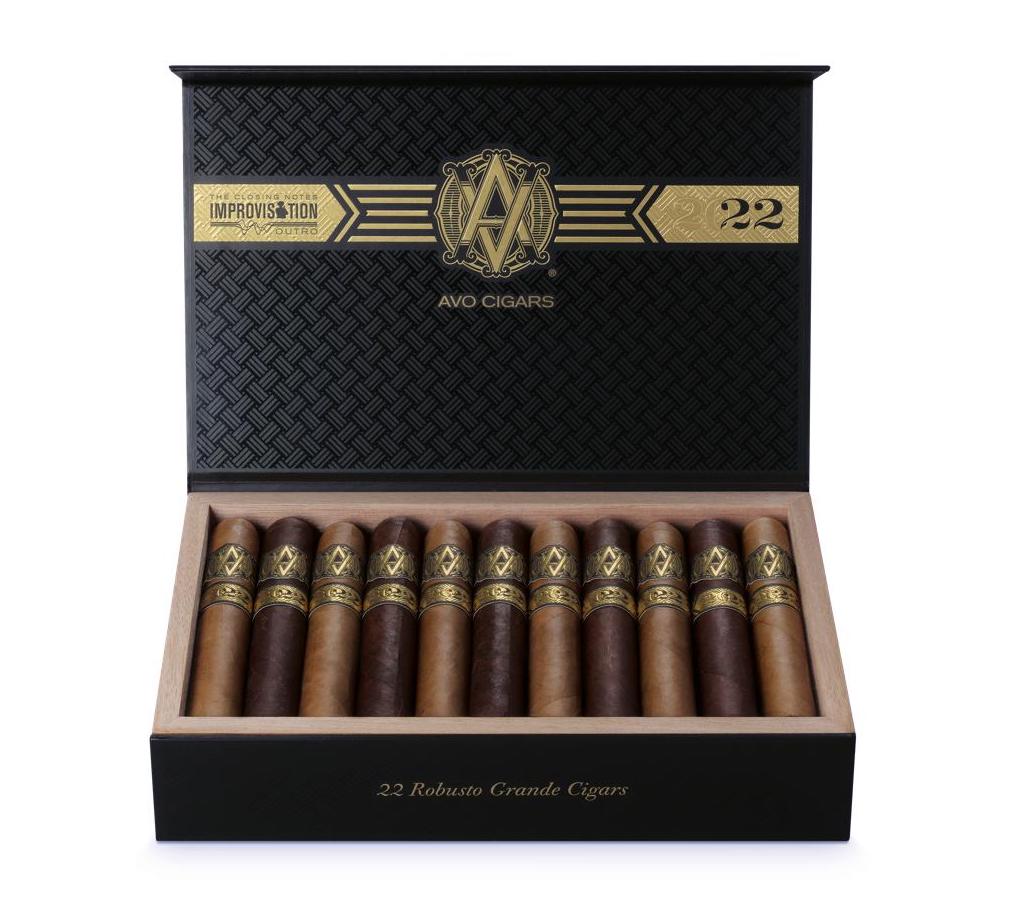 The following are the 11 installments of the AVO Improvisation Series and what each drew inspiration from:

(*) Not released as an AVO birthday cigar in March

One final note, from this author’s perspective, while there were 1,500 boxes allocated to the U.S. market, the AVO Improvisation LE22 was one of the more difficult AVO LE releases to obtain. This is because many retailers chose to keep the LE22 sets together as opposed to breaking them up into individual sets and had success in selling the boxes as a whole.

For now, we turn our attention to the AVO Improvisation LE22 Black.

The Ecuadorian wrapper of the AVO Improvisation LE22 Black had a roasted coffee bean color to it. There was some oil on the surface of the wrapper. The wrapper had a slight amount of mottling and there also was a subtle toothless to the wrapper. This was a wrapper that was on the smooth side. There were some thin visible veins and any wrapper seams present were not too noticeable. The cigar itself was finished with a swirled pig-tail cap.

As opposed to pulling the pig-tail off of the AVO Improvisation LE22 Black, a straight cut was used to remove both the cap and pig-tail simultaneously. From that point, it was on to the pre-light draw experience. The cold draw delivered a mix of earth, grass, cedar, and a touch of red pepper flakes. Overall this wasn’t the most exciting pre-light draw. Since the pre-light draw is not factored into the numeric merit score or value rating, there was no loss of points here. At this point, it was time to toast up the AVO Improvisation LE22 Black and see what the smoking experience would have in store.

The AVO Improvisation LE22 Black opened up with notes of grass, earth, red pepper, and chocolate malt. Early on the grass notes moved into the forefront. The earth notes shortly followed the grassy notes into the forefront. The red pepper and chocolate malt settled in the background. There was also an underlying creamy note present. Meanwhile, there was a cedar note present on the retro-hale.

During the second third of the AVO Improvisation LE22 Black, the earth and grass notes remained the primary notes. Around the midway point, there was an increase in the red pepper notes and a decrease in the overall creaminess. The chocolate malt notes were still present. Meanwhile, the retro-hale had transitioned from cedar to red pepper.

By the final third, the grass and the earth notes were still primary. The red pepper was the most prominent background note. Some black coffee notes were also present in the background. The malt notes had diminished significantly and the creaminess dissipated completely. This is the way the AVO Improvisation LE22 Black came to a close. The resulting nub was soft to the touch and cool in temperature

Overall the AVO Improvisation LE22 Black did require touch-ups to maintain a straight burn path and a straight burn line. While the touch-ups did the trick, there were more touch-ups required than preferred. The resulting ash was light gray. This was an ash that wasn’t overly firm, but wasn’t loose or flakey either.  As for the burn rate and burn temperature, both maintained ideal levels. 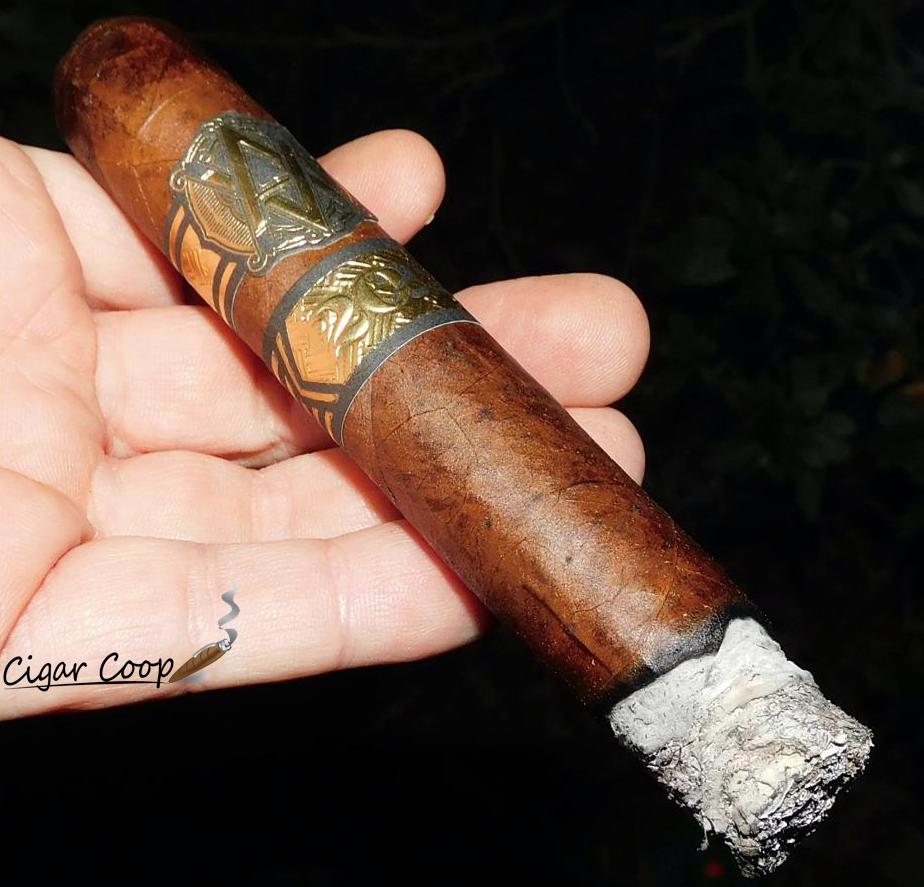 The draw to the AVO Improvisation LE22 Black performed extremely well. This was a draw that had a touch of resistance – which is something that I like. At the same time, this was pretty much a low-maintenance cigar to derive flavor from.

I really like the gold bands that are present on both the AVO Improvisation LE22 Black and White releases. I think it’s a really good look for the AVO brand.

While I also like the effect of packaging the LE Black and LE White together to create the “Piano” effect, I still don’t like it when companies package two different blends in the same box. Then again, Davidoff seemed to do a good job selling these cigars to retailers and retailers have been able to move the box, so what do I know?

As mentioned Davidoff has said it is bringing the Improvisation Series to a close. While I don’t think this is the end for AVO limited releases, perhaps it is time to consider bringing the annual series to a close. AVO has released limited edition cigars on an annual basis for 22 years – and that’s a long time. This series has delivered some iconic cigars, but as some say, “all good things much come to an end.”

I like the fact that AVO delivered a darker wrapper offering. While I did find the AVO Improvisation LE22 Black had a combination of foundational AVO flavors (grass) with some different flavors (Malt and Coffee), I still found this cigar had the same problem a lot of LE cigars have in the market – little in the way of wow factor. In the end, there still was enough going on with this cigar to recommend it to a novice or experienced cigar enthusiast. It’s a cigar I would buy and smoke again from time to time, but when I look at some of the past AVO limited releases it still falls short.