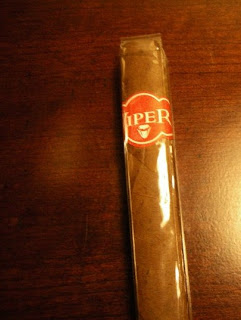 In 2008, Manuel Quesada revolutionized the cigar industry by creating a premium value-priced cigar in the $5.00 to $7.00 range.  That cigar was called the Casa Magna.   The cigar was well-received by many and earned Cigar Aficionado’s prestigious “Cigar of the Year” for 2008.  In a tight economy, this was good business sense. Since then many cigar manufacturers have followed this lead.   With companies such as Oliveros (King Havano), CAO (La Traviata), and Camacho (Legendario) having success in this segment of the cigar market, it was time for Gurkha Cigars to join the club.

Now Gurkha Cigars are known for their flashy packaging.  Whether it is flashy boxes, bands, or tubes, Gurkha cigars stand out.  However, it has also driven the up the price on Gurkha products.  While retailers will not question the quality of these cigars, they do take up shelf space – and it presents difficulty moving cigars off the shelf.

Gurkha has taken a different approach from what they have done in the past.  They’ve opted for simplistic packaging of two new sticks – the Viper and the Ninja.   For these sticks, I think they’ve gone to the opposite extreme.   The band on this cigar is too simplistic.  It does not stand out as a member of the Gurkha family.  To some extent, it appears to be more of a cheap bundle cigar with its simplistic band packaged in a simplistic cedar box.  As a result, I was a little hesitant to smoke the Viper – but once I did, I took all of those perceptions out of my head.   This is one terrific cigar!

Looking at the Viper Robusto (5 x 50 – this is the one I smoked) itself, it also looks simple.  It has a Dominican wrapper and binder (the filler is Nicaraguan).  It has a natural wrapper and the cigar comes in a nice box press shape.  Upon examination of the construction of this cigar, you can see it has the high quality that Gurkha has consistently brought to the market.

The cigar lit easy and consistently drew and burned very nicely.  I did not need to re-light this stick or fight with this stick at all.   The start was mild.   The taste was definitely more on the sweet side.  Many people categorized the taste as caramel and leathery.   However, I have a problem defining what exactly a leather taste it.  To me, it had more of a cedar-like sweetness.  Caramel – slight hints, but I felt more of the cedar taste. 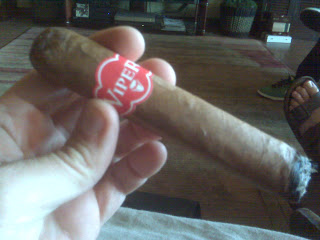 I expected this cigar to be mild throughout, but as the cigar burned down, the strength increased to more of a medium about 1/3 of the way down.   As it progressed to the second third, the medium transitioned to more of a medium-full.   I was pleasantly surprised that this cigar really fit my profile.  Throughout the entire smoke, there was lots of smoke produced by this cigar.  It also maintained its sweetness.   The finish was not harsh at all.  As I nubbed it, it was a little hot toward the end, but that wasn’t unexpected.