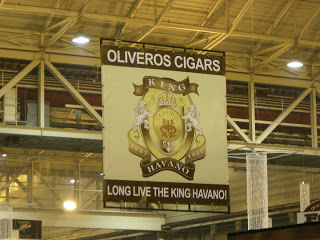 I very much looked forward to the visit to the Oliveros booth.   Over the past 18 months, I really feel that Oliveros has really shown their muscle as a player in the cigar industry.  Led by President Rafael Nodal, Oliveros has produced some terrific cigars at very competitive price points – $5 – $8.00.    My visit to Oliveros booth would not disappoint me as I got a great opportunity to their latest creation – the Swag.

The brand that really has helped Oliveros become a player has been the King Havano line.   These have been consistent and high quality sticks – in that affordable price-range.   Last year, Oliveros unveiled “The Black Knight”.   This was a terrific Maduro box-pressed stick that was overlooked by all of the big boys – and in my opinion was a Top 5 stick for 2009.

And when I visited the Oliveros booth, it isn’t flashy at all.   It was very low ley.   In a lot of ways, it reminded me of the Gurkha booth in terms of its simplicity.   However while I felt Gurkha was trying to get away from the flash, Oliveros was keeping true to their identity – not flashy and flying under the radar.   The Oliveros booth still had a lot of charm and it reminded me of a real nice cigar lounge.

Oliveros would debut two sticks that really had me fired up to pay a visit to their booth.   The first was a beautiful looking 6 x 60 box-press version of the Black Knight called “Mace”.   The other is a new line of cigars called “Swag”.  Swag represents another breakthrough for Nodal and company.  Once again Oliveros, produces another cigar in the value-priced range – without sacrificing any quality.   I still have yet to smoke the Mace, but as for the Swag, this might have been one of the most overlooked sticks of the 2010 IPCPR.   Not only that, the Swag allowed Oliveros to launch a very unique program both beneficial to consumers and retailers.

The cigar itself is a beauty.  I smoked the “Fierce”.   This is a 6.5 x 52 torpedo stick.  As you can see there are two bands, including one at the foot of the cigar.  In between the two bands is some rolled paper that protects the cigar itself.   The beauty of the stick comes from the Habano Dominicano wrapper.  In fact the whole cigar is pure Habano Dominicano Ligero.   The stick itself is loaded with flavor and packs a bit of a punch in terms of strength.  Overall, this made for a very nice medium to full-bodied smoke.  Much of the taste of this cigar is consistent throughout the smoke.   There are definite hints of coffee in the taste that are wrapped around a nice cedar spice flavor.  In my review of the Gurkha Viper, I made a comment indicating how I often don’t find hints of leather in a cigar.  Perhaps I spoke too soon because with this particular stick, I did taste the leather – particularly as I got about 1/2 way down the smoke.   This leather taste, combined with the coffee and cedar spice tones made for a very nice and complex smoke.

Oliveros is also launching a unique marketing plan to benefit retailers and consumers called the Swag Club.    The Swag Club rewards program rewards consumers for purchasing boxers of sticks from a local retailer.   The more boxes purchased, the better the rewards.   Rewards include giveaways, raffles, and discounts.   Thus this is why “Cigar Lifestyle” is included on the band.  It is also worth noting that this program helps the retailers because in order to be eligible for the rewards, a consumer must continue to purchase from the same retailer.

A side note, I wanted to give Rafael Nodal some feedback on this stick as I definitely had it as one of the top sticks for the week at IPCPR.   When I went over to talk to him and give him the news, it so happened that Cigar Aficionado was interviewing him.   My timing couldn’t have been better. Hopefully Cigar Aficionado will take notice of not only this stick, but the Oliveros line.