Shoe Estate (Tales from the IPCPR in New Orleans Part 7) 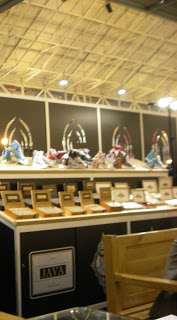 The booth at IPCPR that got the most buzz was the Drew Estate booth.  The company founded by Jonathan Drew is known for doing things in an innovative way with a sense of style. As mentioned in “Tales” Part 6, the company is a reflection of Drew’s personality.   When it comes to the rule book, let’s just say that Drew Estate is on the “unpredictable” side.   Therefore, it really shouldn’t have come to a surprise to anyone that Drew Estate modeled their IPCPR booth after a sneaker store!

What was incredible were the custom “Chuck Taylor” style sneakers that complimented the displays of some of the great cigar products made by Drew Estate.  The cigar displays were comprehensive and complete – everything from Liga Privada, Java, Acid, and more.   Even included was the joint-venture “Nosotros” that was done with Dion Giolito of Illusione.   Even though that cigar is sold under the “Illusione” brand, it was refreshing to see this on display with Drew Estate stuff.

There was plenty of buzz in the sneaker store.   This place was jam-packed the entire week with people, keeping the entire Drew Estate team busy.   The amazing thing was that as busy as the Jonathan Drews, Steve Sakas, and Scott Acids were, they always managed to find time to not just talk to people visiting there, but listen to what they had to say.  It says a lot for the company – and it says a lot for the people who work at Drew.   With the buzz, the “stars” of the cigar industry visited the booth throughout the week.   In my “Tales Part 6” post, I mentioned Jose Padron was there.  Even Cigar Dave got into the action here.

The only negative I could say about the Drew Estate  booth was the music.   With all of the activity going on in the booth, having music playing in the booth made it more difficult to communicate.  Overall, this shouldn’t take what Drew Estates did at IPCPR a step down.   In fact, the IPCPR itself recognized Drew Estate for the originality in the booth and awarded them the “Best in Show” award.

Yes, Drew Estate had all of the flash around their booth, but when it came down to business they also promoted new products that will continue to keep them on the cutting edge of the industry.   Some of the new releases we can look forward to are:  1) The Liga Privada Dirty Rat – a new powerhouse corona;  2) The Liga Privada T52 Flying Pig – the unique small chubby version of Cigar Coop’s 2009 Cigar of the Year, the Liga Privada T52;  3) Acid Toast – another unique herbal infused cigar that smokes like a cigar and has the aroma of an infused cigar.   Below are pictures of the Dirty Rat and Acid Toast below.  More pictures to follow.

So when IPCPR shut down, so did the Drew Estate booth.  This is sad that this was so temporary as this probably will be the only time there ever might be a Shoe Estate.   But if this was, what a great week it was.