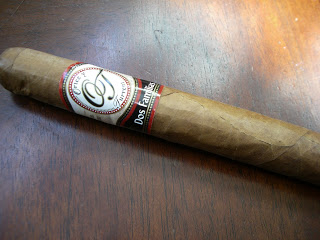 Back in May, I attended a Cigar Dave event in Charlotte and got to sample the world premiere of the A. Turrent Triple Play.   The Triple Play was a Triple Maduro that was created by Alejandro Turrent.  I was very pleased with this cigar and in the end I ended up selecting this as the #20 Cigar for 2010.   At that event, I learned that Turrent was in the process of also collaborating with Omar Ortez on a cigar.  I’ve also been a fan of Ortez’s work and selected his Warlock as an honorable mention for 2010.  Therefore, upon hearing about the Ortez/Turrent collaboration, I was pretty excited to try the “Ortez y Turrent Dos Familias”.    I recently have been sampling this cigar, but unfortunately I cannot be as positive on the Dos Familias as I would have liked.    This cigar was a major disappointment for me.

First let’s take a look at the blend of this cigar:

For this particular review, I opted to smoke the Churchill.  Now as a disclaimer, while I was excited about the collaboration, I’m not the biggest fan of the Criollo wrapper.  However I did go into this cigar experience with an open mind.  I also will say that I have an open mind when it comes to Mexican Tobacco.  I love the Mexican tobacco in the Triple Play and recently reviewed the Gran Habano Azteca – a stick that has a heavy dose of Mexican Tobacco.

Starting out with the smoke, I was treated to a very short quick blast of salt.  Normally I find this with all Nicaraguan sticks, so I was a little surprised with that.  The salt blast is quick and the cigar goes right into a very earthy, woody taste.  I normally am fine with earth and wood flavor notes, but these just did not set me on fire.   As I progressed with the smoke – particularly through the first third, I was waiting for something exciting to happen.   Around the 1/3 point, I did get some pepper spice – nothing overhelming.   The pepper spice would increase somewhat, but it never really grabbed hold of me.   Toward the final part of the cigar, it got pretty harsh.   I did smoke this for two hours, so a long smoke can lead to some harshness.   This could have been the case with this.

The cigar finished cool, but was soft.   I usually prefer a firmer finish – but again this could be from the length of the smoke.   Overall, it was a good burn and good draw – it needed several touch-ups, but these were minor in nature.  From a strength and body profile, I categorize this as medium in terms of both.

In the end, I end up assessing this as a “Pass”.  This cigar while a “value priced” cigar in the $5.00 – $7.00 range, just never did anything for me.  With there so many good “value priced” cigars out there, this just wasn’t one I would reach to.  I’m still a fan of Ortez and Turrent, and would love to see them take another crack at things.   Right now, this stick isn’t for me.

« Updated (1/17/11): Other Cigar of the Year Choices: What the Rest of the World is Thinking » Link to Interview with Jon Huber formerly of CAO