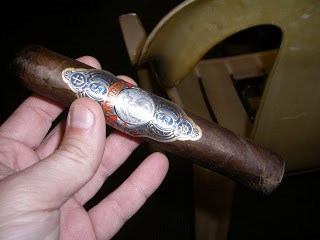 On my 2010 Cigar of the Year countdown, there are some cigars that did not make my list simply because the initial launch of the cigar was late in the year.  Among those cigars was the La Sirena line – the latest launch from Miami Cigars.   Cigars that fall into this category are eligible for my 2011 Cigar of the Year countdown.  The good news is that the La Sirena will be a factor in my countdown. Given its mid-February, it’s tough to determine where the chips will fall – especially with what already looks like a great pipeline for new releases.  But this cigar will be a factor in the year end countdown as I feel this is one of the best sticks ever to come out of Miami Cigars.

A little background on this cigar.  This cigar was blended and manufactured by the one and only Don Pepin Garcia at the My Father Cigars’ factory in Nicaragua.   When I said this was one of the best cigars ever to come out of Miami Cigars, I’ll go a step further – it is possibly also one of the best to come out of Pepin’s My Father factory (and there are a lot of good cigars coming out of that factory).   The brand ambassador is Arielle Ditkowich, daughter of Danny Ditkowich, the owner of Tobacco Plaza in Long Island, New York.  Arielle has been promoting the cigar during its roll-out nationwide.

As of this writing, the La Sirena stick is being rolled out slowly on a nationwide basis.  So far (again as of this writing), I have only seen this in Chicago and New York.   I know the brand is being to make its way into the Mid-Atlantic states.  I have yet to see this in the Charlotte area.   I expect this cigar will be more widely available by mid 2011.

Given this is a Pepin stick, this cigar has a healthy dose of Nicaraguan tobacco.   Here is a breakdown of the composition of this cigar.

The La Sirena is available in several vitolas.  La Sirena is Spanish for Mermaid, therefore the vitola names have a reflection of the “sea”.

For this cigar, I opted for my favorite sized vitola – the beautiful King Poseidon.  Given this was a big ring gauge, and put a straight cut into the cap, carefully toasted the foot, and began what was one of my best cigar experiences in a long time.

One thing with Pepin cigars is I usually expect the trademark “Don Pepin Pepper blast” which is a heavy dose of pepper on the onset of the smoke.  The pepper blast was present, but was not as pronounced as other Pepin sticks – especially with King Poseidon size.   While there was some pepper, I also got some notes of leather and cocoa.   There was also a very unique sweetness to this particular this cigar – after some evaluation, I determined this was a honey-nut taste.   This was not an infused flavor as these honey-nut notes were very natural and “tobacco-like”.   Around the 1/3 point, the cocoa notes begin to increase.  The pepper notes, again while not heavy were still present and complemented the increase in cocoa perfectly.

As the cigar begins to reach the midway point, the sweetness transforms to something more of a sambuca-like licorice sweetness.  The cocoa and pepper notes remain.   I also felt strong notes of coffee begin to form.   I guess the best way to put this is this is like a mocha-coffee with some sambuca and pepper.   Wonderful complexity – and unique flavors!

When I reviewed Tatuaje’s Gran Cojonu (this was my #2 Cigar for 2010), I described this as one of the impressive 60 ring gauge cigars I ever had.  I can now put the La Sirena King Poseidon into this category.  The burn and draw were flawless.  Burn and draw can be very tricky with a big ring gauge, but not the case with King Poseidon.

As for body and strength, Rene Casteneda, Vice President of Sales of Miami Cigars is quoted as saying, “We are very happy to finally have that full-bodied cigar in our portfolio.”  While the pepper isn’t overwhelming, the majority of the flavor notes have a lot of depth, so I agree this is a full-bodied smoke.   I’d also put this into the full strength category.   While it starts out as medium strength, it won’t take long for this cigar to have a kick. While this is a strong, full-bodied smoke – it also is a very smooth smoke.

One final note – this cigar has one of the largest cigar bands I have ever seen.  Take a look at the picture above to get a feel for the size of the band.

Overall, this cigar is nothing short of a home run.   This is one special cigar and its everything a Nicaraguan Puro should be.  I’d probably not recommend this cigar for a novice, but seasoned cigar enthusiasts will really like this.  I also think this cigar will really satisfy Pepin fans.  This is one that will really catch on as the nationwide roll-out continues.  This is a Memorable cigar and should be a candidate for possible reassessment to Hall of Fame/Historic next year.