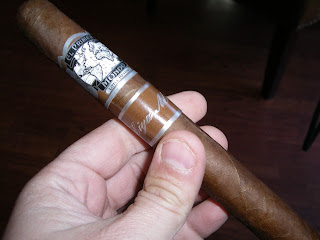 Back in January, I reviewed my first cigar from Sean Williams’ El Primer de Mundo line, the El Primer de Mundo Connecticut.   I drew comparisons to how this cigar stacked up very well to my #8 Cigar for 2010 – the San Lotano Connecticut.   It gave me a lot of respect for what this Indie line brought to the table.  Therefore, I opted to sample a second blend from this line – the El Primer Mundo Liga Miami.   This is another solid offering to Williams’ cigar family.

El Primer Mundo is a company based out of Atlanta, Georgia. founded by Williams.  Williams is building a solid reputation in the cigar community and I feel he now is on the verge of earning cigar-ebrity status. There are four cigars that comprise the El Primer de Mundo line.  As mentioned, the focus of this review will be on the Liga Miami:

For the Liga Miami, Williams teamed up with Willy Herrerra of El Titan de Bronze.  The cigar is rolled in Little Havana in Miami, Florida.

For this cigar experience, I opted to go with the Churchill.  Therefore, I began my routine of putting a straight cut into the triple cap, toasting the foot, and beginning the initial draws.

The flavor profile was very interesting.  The opening notes had some spice that was a good cross between cedar and pepper.  At times, I couldn’t put my finger on what the spice was.  I also detected some wood notes.   The spice settles quickly and goes to the background where the flavor profile becomes a good cross of nuts and wood.   By the 1/3 point, I definitely would say the nut flavor is the predominant one.  The middle of this cigar was harder to put my finger on the flavor notes.   The best analogy I can say is it had a hazelnut like tone.   In a way, even though it wasn’t classic cigar coffee notes, I did pick something up similar to perhaps hazelnut coffee.   In the last third, what was left of the spice is completely gone, and the wood and nut notes are back.   The finish was softer and warmer than I would have liked, but it was not harsh.   In fact, the whole cigar was extremely smooth from initial toast to nub.

This cigar had a lot of uniqueness in terms of strength and body.  With three ligero leaves, this was billed as a powerful cigar.  For most of the smoke I really had this as a medium to full in terms of strength – although I definitely felt a buzz after the smoke.   The body of the flavor notes was not as deep as I would have expected.   In fact, I would classify this as classic Medium body.

Burn was pretty good.  I did have to touch the cigar up a few times.   The cigar never burned hot – although it did finish soft at the end.  No draw issues – very easy to work this cigar.

One final note, this did have a lot of the characteristics of a good, smooth cuban cigar as opposed to an “in your face” Nicaraguan ligero cigar.   Kudos to Williams and Herrera for bringing something different to the table – something that I feel is essential to any retailer or consumer considering an Indie cigar.  I can see this cigar fitting the cigar pallet of many. I enjoyed this cigar and it was a wonderful change of pace.