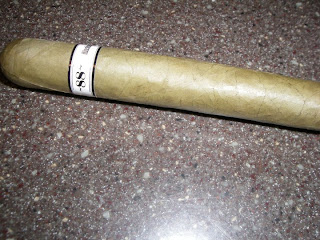 Before getting into the review specifics, as many know a candela wrapper is green in color.  It is fermented at a higher temperature for a shorter period of time.  This allows the leaf to maintain its chlorophyll and this keep its green color.

Let’s take a closer look at the Illusione 88 Candela:

Here is a summary of the composition of this cigar:

The 88 Candela is available in a single vitola – a 5 x 52 Robusto.  There are also candela blends for the Illusione 888 and the Illusione HL.

So I must make a couple of disclaimers.  First up, I smoked only one of these.   But I feel there is enough positives to make a statement here and give it a fair asessment.   Second, some bad news: I dropped this cigar, and it got a pretty bad crack – right into the binder.   I’ll talk more about this later, but this Illusione 88 fought like a champ – and gave me an incredible cigar experience.

I put a straight cut into the beautiful green cap, then performed a pre-light draw.  Most of the notes I got from this were cream based.   I then proceeded to toast the foot and begin the smoke.

From a flavor profile, the Viaje WLP Candela had an edge in complexity, but I really loved the flavors the 88 Candela delivered.   The initial flavor notes were definitely dominated by the cream I got on the pre-light draw.  Cream played a big role in the flavor profile here.   I also got treated to some black pepper right out of the gate.  It was in the first third of this cigar that I was battling the deep crack I had (it was above the foot), but this had no issues in terms of the flavors I got.

As the cigar progressed into the first third, a very unique sweetness emerged from this cigar.  I’m somewhat in agreement with Crooked Burn’s assessment on this, it definitely had notes of sugar.  To me the notes tasted more like raw sugar cane.   I really enjoyed this sweetness as it played a key role in the flavors of the cigar going forward.   The pepper notes had also significantly diminished as the sugar cane flavors came toward to forefront, but the cream notes remained.   In the background I also detected some notes of wood.

Around the midway point, the cream notes got richer, they almost became more of butter cream.  The way this complemented the sugar cane, you would think you were smoking a piece of layer cake (and that’s not a negative).  The pepper and wood notes were now completely gone.   It is in the second half where I started to get some of the signature Illusione tea notes.   Normally, I don’t like this flavor, but I can honestly say it provided a terrific balance to the sugar and cream notes that were present.  The finish was a little soft (probably due to the burn issues), but cool.

Unfortunately because of the crack, I have to give the burn an incomplete.   I was debating going with a Pre-Review and then doing a full assessment later, but there were so many positives with this cigar, I wanted to share them.   I never had such a bad crack in a cigar, yet the cigar fight its way through like that.  I opted not to take pictures because in the early part of the smoke it was a bit ugly and it would take away from how good a smoke this was. However I got through this – and in the second half, the burn was perfect and one would have never known I had crack into the binder.   The cigar didn’t burn hot and it didn’t burn fast.   The fact I didn’t have a hot finish was amazing.   This is a true testament to the quality of the construction of an Illusione cigar.   At some point, I will go back and update the burn assessment when I smoke another one.

The draw was flawless throughout the smoke.   Even with a crack, it didn’t impact things one bit.

Candela has a reputation for being mild, but I actually assess the strength profile a little above mild – more of a mild to medium.   This is one advantage I give over the Viaje WLP Candela which was solid mild.  However, like the Viaje WLP Candela, there are very pronounced flavor notes – a definite medium in body.

There was no doubt I enjoyed this cigar.  The Illusione 88 Candela lived up to the hype and did prove to me that Dion did something special with Candela.   The nice thing is that this proves my theory that there is room in the market for two Candelas without one robbing the other of the spotlight.   I do want to smoke another 88 Candela without a crack.   In the end, while it’s hard to say right now whether the Illusione or Viaje candela is better, I can honestly say these are 1 and 1A in terms of the best candelas I ever had.