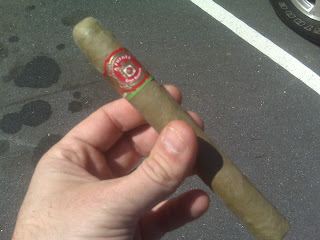 So here we are, St. Patrick’s Day, and it’s time for another cigar.  In my opinion, this is the perfect day for enjoying candela wrapper stogie.   If you have been reading Cigar-Coop in the month of March, the word of the month is “candela”.   This month, I’ve smoked two great candela cigars:  the Viaje White Label Project Candela and the Illusione 88 Candela – and there has been a lot of controversy over them.    My buddy Stace was kind enough to pick me up a Candela that’s been around for a while – the Fuente Flor Fina 8-5-8 Candela.  Since I haven’t really done a Fuente review as of yet – and it was St. Patrick’s Day, I figured this would be a golden opportunity to sample an older candela cigar and then see how it applies to the on-going debate going on.

Let’s get right into the specifics of this review.

Here is a summary of the composition of this cigar.  There is a big difference from this candela cigar as opposed to the Viaje WLP Candela and the Illusione 88.  The Fuente Flor Fina 8-5-8 candela has Dominican binder and filler.

I did not have my Cigar Cyclopedia handy, so this might still need validation.  The 8-5-8 is available in one size – a Lonsdale-like 6 x 47.  I have not seen the Candela version of this cigar available in any other vitola.

I opted to put a straight cut into the cap of this cigar.  Upon the pre-light draw, there was nothing that terribly excited me.  I first drew some wood, but then managed to find some cream notes.   It was on to toast the foot and enjoy this cigar.

While the Viaje WLP Candela and Illusione 88 Candelas had some level of complexity, the Fuente Flor Fina 8-5-8 was definitely low on this end.  The initial draws continued the flavor notes of the pre-light draw – namely cream and wood.   As the smoke progressed, the cream notes did begin to move to the forefront.  I also started to detect some sweetness – similar to the sugar cane taste I got from the Illusione 88, but not with the body of the Illusione.

About halfway through the cigar, the sugar sweetness was clearly the dominant flavor note.  A hint of cedar spice had also emerged to complement the sweetness.   By this point, the cream notes had definitely diminished.  While the first half of this cigar wasn’t overly complex, I was really enjoying the flavors from this cigar.

The last third is where the cigar took a turn.  It was in this segment that the sweetness began to fade.  Much of that was replaced by some wood notes.  Even the cedar sweetness had begun to fade.  I did not enjoy the last third of this cigar as much as the first two thirds.  At the end,  I got a decent nub – it was soft and a bit warm, but not an overly hot nub.  The end was harsher than I would have liked.

Very good scores for both of these.  The burn was nearly perfect for the whole cigar experience and did not require any touch-ups.  For a Lonsdale vitola, the burn rate was just right.   It never burned hot except for some warmness in the nub.  As I mentioned above, it did result in some harshness.   The draw complemented the burn very well – no issues here.

This cigar was classic mild in terms of strength.  You aren’t going to get a lot of kick from this.  The body of the 8-5-8 flavor notes of this cigar were not as pronounced as the Viaje WLP Candela or the Illusione 88 Candela.   For the 8-5-8, this falls right into the Mild to Medium in terms of body.

After smoking the Viaje, Illusione, and the Fuente candelas, it confirmed one thing – Nicaraguan tobacco is now the best in the world and it makes a more robust cigar.  The one thing the Fuente lacked was the Nicaraguan binders and fillers.   One important consideration though is the price point – this cigar can be obtained around the $5.00 price range.   For a $5.00 cigar, it isn’t easy to find one with the quality this 8-5-8 had.    It’s a great chance to sample some of the wonderful flavors candela wrapper cigars can bring to the table at an affordable price.  I’d still go back and buy it again.