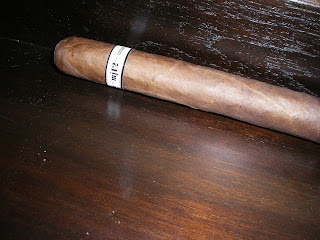 There are two reasons why I wanted to review the Illusione MJ12.  The first reason is that I simply have not paid enough attention to the Illusione brand.  There is no doubt that Dion Giolito has built a huge following of cigar enthusiasts and his products have a great reputation.   The second goes to what Dion’s good friend Pete Johnson said earlier this month – “I make gimmicky cigars cool”.  Agree with the comment or not, that comment certainly has been getting a lot of attention.  Therefore, I wanted to set out to review some cigars that can be considered gimmicky and see how cool they were.   With the Illusione MJ12, I found a solid cigar that was extremely well made – and yeah, it has some “coolness” to it.

Now first up you might ask, why is the MJ12 a “gimmicky” cigar.  It comes down to the packaging.   This cigar is wrapped with foil.   I kind of liked the packaging of it.   It gives a feeling of freshness to the cigar (which it does make it air tight) while at the same time it is like opening a present of Christmas.   So yes, it is pretty cool.

A cigar can have a marketing angle, but ultimately with me it all comes down to the blend.  Here we have true Nicaraguan Puro making up this blend.

For the beginning of my cigar experience, I had an extra step.  I had to remove the foil off the cigar.  No doubt this was an air-tight foil, but it did give me that great feeling of opening a present.  I then proceeded to put a straight cut into the beautiful triple cap.   The pre-light draws revealed a combination of leather, chocolate, and spice.   I then toasted the foot and the experience of enjoying my Illusione MJ12 had commenced.

Sometimes with Nicaraguan Puros I get a salt or a pepper blast, but this one did not really give me anything that was noticeable.  The initial flavor notes were definitely a combination of some earth, leather, and some subtle pepper spices.  As I began to progress with the smoke, I noticed the earth and leather morph more into a cocoa flavor.  The pepper also builr up, but it was not a classic black pepper.   This pepper had more of a red pepper feel.   The Illusione 2 had given me a cayenne pepper taste, so something different than black pepper is something I’ve seen with Illusione in the past.  The other interesting thing is that there was a very unique herbal undertone on this cigar.

Around 10 percent into the cigar experience, I noticedthe earth and cocoa tones alternate with the red pepper spice.  They seem to take turns in terms of which is the prominent flavor note and this progresses until halfway through the smoke.  At the same time, the herbal undertones remain.  It is in the second half where things begin to change.    I felt the earth and cocoa notes morph more into a classic wood flavor from a cigar.  The red pepper spice seemed to transition more to a cedar-like spice.   But perhaps the most interesting thing was what happened with the herbal understones – they seemed to morph into something I could not put my finger on.   It was when my buddy Stace mentioned “Tea” that I put my finger on it – it was definitely tea.  These tea notes were not herbal, but more classic black tea.

The cigar finished beautifully.  Not harsh at all, with a firm, cool nub.

Outstanding on both ends.  If I could give out a perfect score for construction, this would probably get it.  This burn was as good as it gets.  Not only did it burn straight, but it burned at the right pace and the right temperature.  This is perhaps why the draw was terrific.

Somehow from the looks of this cigar, I was expecting much more of a kick, but it really never delivered one as it was medium in strength.  The flavor notes just squeak into the Medium to Full range.   I struggled whether to classify the notes in that range, but felt there was just enough depth for the flavor.

There is one negative on this cigar.  Yes, this cigar was well-constructed, complex, and had some body.  The ultimate thing is that I’ve heard folks rave about this cigar.  I’ve smoked hyped cigars and some have lived up to the hype.   This one did not.  The MJ12 is a quality smoke, but it isn’t in my flavor profile.   The approximate $8.50- $9.50 price point didn’t excite me much either as there are other choices I would reach for before this one.   Cool cigar? Yes;  Good cigar? Yes;   Out of the park?  Unfortunately not quite.