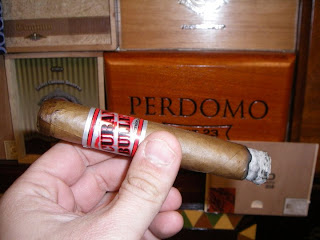 As I follow various cigar brands and the people behind them, when it comes to Perdomo Cigars there is no question about their commitment to bring a quality product to the marketplace.   I’ve witnessed Nick Perdomo’s care and commitment first hand, and from a consumer point of view, he’s done a great job at providing great smokes to the marketplace.   Last year, Perdomo brought back an older brand – the Cuban Bullet.  With this cigar’s return, some changes were made to deliver a quality smoke at a great price.   After sampling the new Perdomo Cuban Bullet v2.0 Cuban Seed Sun Grown, I can attest that this is a great cigar.

One thing Perdomo does better than any other brand is providing a good horizontal for the consumer.  Like with many of the other Perdomo cigars, the blend is offered with a selection of different wrappers – thus appealing to different pallets.  The Cuban Bullet v2.0 comes in Nicaraguan Cuban Seed Sun Grown,  Nicaraguan Connecticut Shade, and a Nicaraguan Maduro wrapper.  For the purposes of this assessment, I will look at the Cuban Seed Sun Grown.

The Perdomo Cuban Bullet is available in four classic size vitolas.   For the purposes of this assessment, I will sample the Robusto.

I’m getting more in the habit of performing pre-light draws.    For this particular cigar, I placed a straight cut into the cap.   On the pre-light draw I got some basic wood tones along with a touch of butternut.   It was then on to toast the foot and enjoy the cigar.

For my Robusto, the initial notes definitely continued the butternut tones that I sampled on the pre-light draw.   When I sampled the flavor through my nose, I picked up some char notes – not harsh ones, but ones that you would get on a nice piece of steak.   As the smoke progressed through the first third, I began to detect some nice notes of nutmeg.

As the second third started, wood notes emerged  and I detected some nice cherry notes.  I enjoyed the sweetness this cigar was producing.   As the smoke entered the second half, I did notice the emergence of some pepper notes.  I particularly liked the timing of the pepper notes here.  While the pepper won’t overwhelm you, it does replace the sweetness.   The finish to the cigar was a bit soft and warm on the nub, but it maintained nice flavors right to the end.

My burn at times did require a few touch-ups, but nothing on the major side.   The burn rate and burn temperature were fine.   No problems on the draw – this cigar was a joy to smoke.

This is a classic medium strength and medium body cigar.  It gives a good balance of both.   This really is a cigar you can have any time of the day.

The price point for this cigar is in the $3.50 – $5.00 range depending on your retailer and vitola.   A lot of times when somewhere hears of a cigar at this price, they think “cheap cigar”.   This is not the case with the Perdomo Cuban Bullet v2.0 Cuban Seed Sun Grown.   Not only did I enjoy this cigar, but I smoked it with a couple of friends and they also gave it a thumbs up.   Perdomo delivers well on this one.   Because I enjoyed it so much, I’d buy this cigar and smoke it again.