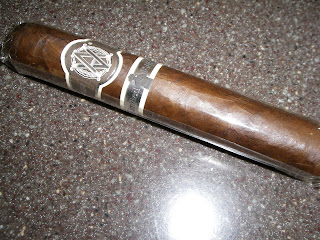 With March 22nd being Avo Uvezian’s 85th birthday, I figured I was long overdue to provide a detailed assessment for my 2010 Cigar of the Year – the Avo Limited Edition 2010 (Avo LE10).

First up, you will notice that this cigar was not only my #1 Cigar of the Year for 2010, but it has been assessed with the “Historic/Hall of Fame” assessment.  On Columbus Day weekend, I will announce the Hall of Fame class for 2011 and one piece of criteria is that if you are named my number #1 cigar of the year, you earn this assessment and earn a spot in my Hall of Fame.  I’ve heard some folks argue the Avo LE09 or Avo Heritage is a better cigar.   I think that’s what makes assessing cigars so much fun – everybody’s got a different opinion.

Somebody I know in the tobacco industry handed me one of these cigars almost a year ago.  While Avo Uvezian is definitely my all-time favorite cigar-ebrity,  I’ve always considered Avo cigars more on the medium side.  He told me “this is like no other Avo you have had before, and put this right up there with Padron quality”.   Being I trust this person, I went ahead and fired it up.  I can honestly say, he couldn’t have been more right.  Without first adieu, let’s explore why this was cigar of the year.

Let’s get right into the specifics of this review.

When I announced this as Cigar of the Year, I made the comment that the theme for 2010 was definitely Nicaraguan tobacco.  Yet, as competitive as the race for Cigar of the Year was, there was not one ounce of Nicaraguan tobacco in this cigar.  On the other hand, this cigar does leverage Ecuadorian wrapper – and it was a big year for Ecuadorian wrapper.  I think the key components in this blend are obviously the all Ligero filler (to give it its strength), and the underrated power of the Mexican binder.

The Avo LE10 is available in a single vitola – which is par for the Limited Edition series.  For the 2010 edition, they opt for something called the “Super Robusto” – a 5.5 x 55 vitola.

Each time I light one of these, it is almost like a ritual.  With the LE10, I always want to take TLC because I love this cigar so much.  I put a straight cut into the beautiful cap.   I do believe with this cigar a pre-light draw is important to get a bit of a feel for the draw.   This draw is going to be a little looser than most cigars.  It will smoke fine as long as you keep this in mind.   The flavor notes on the draw are nice – a combination of chocolate/cocoa and pepper.    Once I finish my pre-light draw it is time for toasting the cigar and moving forward.

Out of the gate, there is a very quick pepper blast – and I would say this could be measured in a few seconds.   After the pepper blast, the spice transitions to a subtle cedar spice.  At the same time, the  LE10 settles nicely into a combination of cocoa powder as the dominant note and some grass – layering the cedar spice perfectly.  During the first ten percent of the smoke, I sometimes have seen the pepper randomly re-emerge during that time period, but it always settles down again.   Each time – right out of the bat, I get the feeling this is not my father’s Avo cigar.

As the cigar moves about 20 percent into the smoke, the cocoa/chocolate notes are the ones that are that move to the forefront.  Meanwhile the spices transition to more of what I term a “baker’s spice” – a nice mix of cinnamon and nutmeg.  Yes, I was really digging this Avo – the complexity was most certainly there.

The second third of a cigar is often the point that makes or breaks it, so with the Avo LE10 this is my favorite part.   It is here where roasted coffee and espresso notes that emerge into the forefront.  You’ve heard me mention with other cigars that I love a “chock full o nuts” flavor – well the great news is, the LE10 is going to bring that to the table.   At the same time, there are hints of baker’s spice, and yes, some of the pepper seems to creep back up.   Finally, all of the notes are balanced nicely with hints of cream.   The result is that the cigar settles nice and smooth – totally awesome

The last third of the cigar is often a time where a cigar might disappoint, but not with the LE10.   The cigar does another transition into cherry sweetness and some hints of steak char.  Not harsh at all – the cigar comes in for a perfect landing with a firm, cool nub.

The burn is as good as it gets.  It is a razor sharp burn that requires no touch-ups on a consistent basis.    I mentioned this is a looser draw than you might expect.   You need to accommodate this looser draw when you smoke it – or you affect the burn rate and burn temperature.   I don’t think you need to be a cigar expert to work this draw – just don’t overdraw it and you will have a perfect experience time and time again.  The Avo LE10 has wonderful flavors, so take the time to enjoy it.

From a strength perspective, I tell folks not to underestimate this cigar.   This is a full strength cigar.  Remember, its all-ligero filler.   Particularly, if you smoke this fast, you will feel it harder.   Again, take the time to enjoy this cigar.  It has wonderful full-bodied flavor notes that you will want to savor time and time again.

I’ve talked this cigar up to everyone I spoke to.  I’ve written quite a bit about it, so there isn’t much more I can say. The SRP is $15.50 and it is worth every single penny in my book.  As I advised: go slow with the smoke – this is a good 90 minute to 2 hour smoke, so enjoy it.