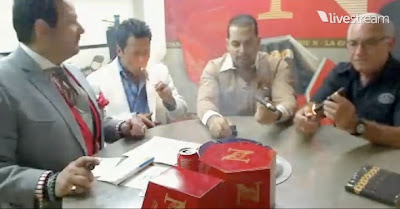 Last night was pretty busy night from my perspective as I attended a terrific Oliveros event at Outland Cigars in Charlotte, NC.   However, I really wanted to make a point to catch the webcast of the La Gloria Cubana Serie N virtual smoke featuring Team La Gloria Cubana (Michael Giannini, director of marketing; Rick Rodriguez, cigar master in training; Yuri Guillen, director of manufacturing; and Leo Peraza, master cigar maker) .   I must say, I was extremely pleased that I got the opportunity to view this.

The event was the showcase of a month long promotion being done by General Cigars for the La Gloria Cubana Serie N.  As a part of the virtual smoke there was a chat room and select retailers talked to Team La Gloria Cubana via skype.

Overall, I thought the concept was terrific.  Yes, there were a few technical glitches (screen freezes – and I’m forgiving since I do webcasts for my “other” job regularly), but overall I was really pleased with the event.   There were four one hour webcasts, and I was only able to attend the final one.  Therefore, my thoughts can only pertain to what I saw.  Here are some random thoughts.