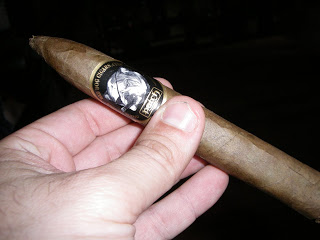 One thing I always look for with an Indie cigar is something unique that comes to the table.   When I came across the Bad Dog Special Blend, this was a cigar that intrigued me.   The distinguishing factor on this cigar is the unique wrapper that it brings to the table – the Rhodesian (Zimbabwe) wrapper.   I’ve had a lot of cigars before, but the Bad Dog Special Blend is the first one that I’ve had with a wrapper from Zimbabwe.   The question I posed to myself is what would the experience of this cigar would be?

Several months ago, I sampled Bad Dog’s Patch 60 in the Connecticut Shade wrapper.  While I had accidentally damaged this cigar, I was still surprised that it provided me a very nice medium-bodied smoke.  Since I only had a single smoke and it was damaged, I could not provide a full assessment.  Still I got positive vibes from what the Bad Dog Patch 60 Connecticut brought to the table.

Without further adieu, let’s take a look at what the Bad Dog Special Blend brought to the table.

As mentioned before, it is the unique wrapper that really distinguishes the cigar.  No doubt it had a striking resemblance to the popular Cameroon wrapper out of Africa.   The binders and fillers come from Nicaragua.  The wrapper definitely makes for a great appearance.

The Bad Dog Special Blend comes in three vitolas.  Each vitola is a box-press and has a closed foot.

For this cigar experience, I selected the Torpedo.   Therefore, I went with a straight cut (as I always do with a Torpedo).  The pre-light draw was very interesting and had some promise.  I got some hints of caramel and pepper – although the notes were not very deep.   It was on to toast the foot to see what this cigar would bring to the table.

It took a few minutes for some sweetness to emerge on this cigar.  The initial draw of this cigar provided some barnyard and earth notes with a hint of pepper.   Once the sweetness emerged, it definitely was in the cherry sweetness category.    The pepper faded quickly.  Since it was a hint of pepper, I would not categorize this as a pepper blast at all.

As the smoke progressed, the sweetness took on a form of cedar sweetness at times – other times, I detected the cherry notes I had early on.   As the cigar progressed to the halfway point, the flavor notes got less interesting.   The notes primarily seemed to be in the wood/cedar category.   It was as the cigar entered the last 30 percent of the smoke, that I actually got a return of the cherry sweetness and mild pepper that I had gotten earlier in the smoke.   The nub was soft, but it was burning cool at the end.

The burn and draw were not bad.   The burn did need some touch-ups, but I didn’t have to fight it to burn straight.  The temperature and burn rate were fine as well.  The draw reflected this as well.  I really did not have to fight with this cigar during the cigar experience.

The one thing – this was not a cigar with a lot of kick.   In other words, from a strength category this was a mild smoke.   It was a little surprising to me as I did not expect a mild strength cigar from the appearance (or the name “Bad Dog”).   The other surprise was the body – not a lot of depth to these flavor notes.  I have this as mild to medium at best.

Was this a bad cigar? No.   Unfortunately, it did not provide a lot in terms of strength and body.  The midway point where the flavor notes were very woody did not impress me either.  Finally the complexity was low as well – not a lot of flavor transitions or variation.  I’m not ready to dismiss the Rhodesian wrapper as the cause of these issues.   The “net/net” is that this wasn’t really my profile for a cigar. On the other hand, I recognize that a mild strength and mild to medium bodied does appeal to some people – especially novice cigar enthusiasts.  If this is what you like, it might be worth checking out.

Disclaimer:  This cigar was provided to myself from Bad Dog at IPCPR 2010 .  The request was initiated by Bad Dog cigars as a sample to check out this cigar.