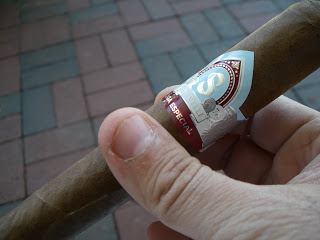 Over the past couple of months, I have gotten the opportunity to sample cigars made my Savinelli.  The Savinelli Nicaragua Reserve and the Savinelli Special Selection 2005 were both very positive cigar experiences. Usually the third time is important for me when I look at a brand – namely if a company has three solid cigars from different blends, you can build a brand.   Therefore it is time to look at my third Savinelli cigar to sample – the Savinelli Liga Especial.  Yes, folks – the cigars made by Savinelli are definitely candidates to be brand builders.

A little background on Savinelli (and this might be a rehash from my previous reviews on Savinelli):   Savinelli built their reputation in the pipe business.  They have been making pipes since 1876 and today they are still considered some of the best pipes on the marketplace.   In 1994, Savinelli entered the cigar arena. Being that Savinelli’s business is the pipe industry, they teamed up with  La Aurora, Tabacalera Oliva, Tabacalera Fuente, and Tabacalera Placencia to make their cigars.

The initial flavor continued with the theme of coffee and cream I got from the prelight draw.  I also detected notes of salt early on.  A lot of times when I get a start of salt, it usually dissipates.  In the case of the Liga Especial, it hung around a little more.  I eventually got some notes of cayenne pepper.  The nice thing is the mix of the salt notes and cayenne pepper created for a very interesting balance against the coffee and cream notes.

The coffee and cream was definitely omnipresent for the first half of this smoke.  It eventually becomes the dominant flavor by the halfway point.   By this time, the salt/pepper spice notes had transitioned to more of a traditional cedar spice.    This is the way the flavor profile held as the cigar moved toward the finish, although the cedar spice eventually overtakes the coffee and cream notes.  I got a soft nub (which is common when you burn a 6 x 60 all the way down), but it was cool in temperature.   No harshness as this cigar finished up.

Sometimes a 6 x 60 cigar is going to be difficult to get a good burn and draw.  This is often compounded when it is smoked outdoors and there is a breeze.  For the Liga Especial, I definitely took this cigar to the test.   I had it outside with a gentle breeze.  The great news – the burn and draw came through with flying colors.   The burn required only a touch-up or two and burned at a perfect temperature.   The draw was solid as well.

The Liga Especial is going to give you a smooth smoke from start to finish.   This is a solid medium in both categories.  The flavor notes actually decrease a touch in body in the second half, but the Liga Especial maintains its incredibly smooth profile.

Two textbook statements are very true about the Liga Especial – a cigar doesn’t need to be full of a lot of flavor transitions and power to be an enjoyable smoke.  This is clearly the case with the Savinelli Liga Especial.  This cigar is another solid release by Savinelli and definitely shows me a company that can be a brand builder in any humidor.

Disclaimer:  This cigar was provided to myself from Savinelli.  The request was initiated by Savinelli to myself (Cigar Coop) to provide an assessment.