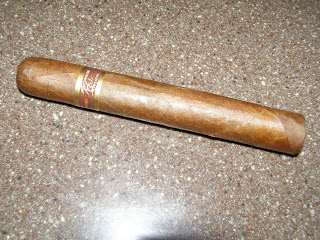 The Drew Estate Double Signature Reserve is a retail-only cigar.   This cigar is sold down in Marietta, Georgia at the Tobacco Superstore.   From the initial look of this cigar it does look like a sibling to the Drew Estate Liga Privada T52; however the guys at Tobacco Superstore described this more as a “cross between a T52 and Liga Privada No. 9”.    Nonetheless when I looked at the Double Signature Reserve, the first thing I saw was the “American Habano” Stalk Cut wrapper of the T52.   With the cigar having the pedigree of my 2009 Cigar of the Year (the T52), there was no doubt I had to try this cigar.   While this cigar looks similar to the T52, I found this to be a different smoke that was also very enjoyable.

There have been a 100 boxes of 24 produced for Tobacco Superstore for a total of 2400 cigars.   By all means this cigar fits the definition of “limited release”.

The Liga Privada line is known for some interesting blends.  While it is not an official “Liga Privada” cigar, I cannot help but make the comparision. The Double Signature Reserve stays true to this line’s roots by incorporating six kinds of tobacco.

A little background on the Habano Stalk-Cut wrapper:  This wrapper originates from Connecticut.  The unique thing is that for Stalk Cut Tobacco, this means when the leaf is cut, the entire leaf is cut – including the stalk.   When the leaf is hung to dry, it is hung to dry from the stalk.  It is not used often because this is a more expensive harvesting technique.  When you stalk-cut tobacco, the whole leaf is cut – including the lower leaves (which is typically the case as traditional harvesting involves pulling the leaves as their ripen).  The advantage is the stalk-cut tobacco gains the nutrients provided by the stalk.  To my knowledge (at this writing),   the only other company I have seen make use of the Stalk Cut tobacco technique has been Berger & Argenti.

This retailer exclusive cigar (Tobacco Superstore) is only available in a single vitola – a 6 x 52 Toro.

For this cigar experience.  I opted to place a straight cut through the American Habano cap.  This is typically what I do with the T52, so I wanted to do the same with the Double Signature Reserve.  On my pre-light draw, I got a combination of wood and coffee.   I expected a little more from the pre-light draw given the complexity of the blend, but ultimately it is actual smoke that makes or breaks a cigar in my book.   Therefore it was on to lighting this cigar.

On my initial draws of this cigar, I was treated to a quick, but not overwhelming taste of salt.    This dissipates very quickly and settles into a medium coffee flavor with some notes of leather.   As the smoke progresses, the coffee notes get more pronounced(and stronger) and transition more to an espresso syrup-like flavor to it.   As the cigar goes into the second third, spice emerges with the espresso.    I usually try to be specific when I say “spice”, but I got to admit, I’ve had difficulty putting my finger on this spice.   It’s pretty unique and the best I can do is say its a cross between a baker’s spice and a cedar spice.

In the last third, the espresso notes begin to fade and the spice seems to morph into a more traditional cedar spice.   The cigar finished with a trademark Liga Privada firm, cool nub – and was not harsh at the end.

Normally when it comes to the Liga Privada line – and in particular the Liga Privada T52,  the burn and draw is pretty much flawless.  However my experiences with the Double Signature Reserve seemed to be a notch down.   While the cigar did not burn hot or too fast, it did burn a little more uneven for my liking and it required touch-ups.   The draw was a little tighter than I preferred up front, but for the last 75% of the cigar, the draw opened up and it worked fine.

The best way I can describe the strength of this cigar is that it is an amp’d down version of a Liga Privada T52.   While the T52 is a full strength smoke, the Double Signature Reserve will not overpower you and is a solid medium in this category.   From a body standpoint, I still would say the T52 has the edge as that is full-bodied, I’d categorize the Double Signature Reserve as Medium to Full.

Disclaimer:  The cigar used for the cigar experience described in this assessment was purchased at Tobacco World in Marietta, Georgia.