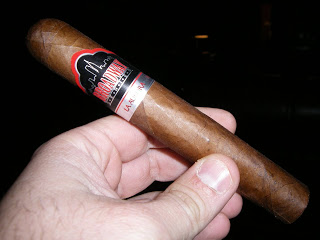 With the insane cigar taxes in New York State, several cigar manufacturers have stepped up to produce “New York” only cigars.   The concept behind these cigars is that only New York Tobacconists will be able to purchase these from the manufacturers that produce them.  This is meant to provide a much needed jolt to the New York State cigar shops who are being directly impacted by the high taxes.   Three cigar companies have stepped up to produce these New York State exclusives:  Alec Bradley (Alec Bradley New York), Gurka (Para La Gente), and La Aurora (Broadway Series).    As a result of some recent trips to New York City, I’ve now had a chance to smoke several of these – and it’s now time to start to share some experiences.   Today, I’ll take a look at the La Aurora Broadway.

The Broadway Series started making its way to New York retailer shelves at the beginning of January of 2011.  It is being released under Miami Cigars’ La Aurora brand.   Let’s take a closer look at the cigar:

The blend of the La Aurora Broadway was very appealing – from the double wrapper (Ecuadorian/Nicaraguan),to  the Corojo binder, to the Peruvian filler.  The Peruvian fillers are nothing new to the folks at Miami Cigars as this was a key component to the Guillermo Leon Signature Series.

At the time of this writing, the La Aurora Broadway Series is only available in a single vitola – a 5 3/4 x 54 Toro-like cigar known as the “Sumo Toro”.

Normally the largest ring gauge I will use a punch cut on is a 54 ring gauge and I opted to use this cut for the La Aurora Broadway.  The pre-light draw produced some notes of leather and sweetness.   It was a little difficult to place my finger on it, but I’ll lean toward a near citrus-like sweetness.  It was then on to toast the foot and sample this cigar.

I do read some of the other web-sites that do cigar reviews.  Prior to my first La Aurora Broadway, I remembered the Stogie Guys had mentioned white pepper to start.  Sometimes I agree with what I read, other times I don’t.   In this case, I definitely detected the white pepper notes to start. The hints of leather I had detected on the pre-light draw were also still present.   In the early part of this smoke, the white pepper faded quickly.  Around 10 percent into the smoke, the pepper notes seemed to come back, but this time took on more of a quality of a cayenne pepper.   The cayenne pepper then faded and settled into more of a cedar spice.   The first third of this cigar was interesting how the spicy notes kept creeping back to the forefront.

As the cigar progressed into the second third, some of the best flavors that this cigar produced come center-stage.  The cigar seemed to settle into a combination of chocolate and cedar spice.  There are also some sweet notes of berry and orange peel that layer real nicely on the chocolate and spice notes.  On the last third of the cigar, the sweet notes fade and the cigar has predominant wood and cedar spice notes.   On the finish, the cigar had a warm and soft nub – and it did create some harsh notes at the end.

While the nub of my cigar was warm and soft, the burn was still good throughout the cigar experience.  It burned at a good rate and temperature.   It did require some touch-ups (more-so on the early side), but nothing major.   The ash tended to be a little loose and flakey.   As for the draw, it did seem tight early on (thus possibly why my burn was a little rough early on), but then settled nicely.

I thought this cigar kicked up a more strength and nicotine than many others have said.   I’m putting this in the medium to full range.  The body of this cigar is robust – it has deep flavor notes.   I’m assessing this as full-bodied.

The flavor notes of the cigar were very good – and this cigar really showed some nice complexity in that department.  The only real disappointment was the , but overall this was still a good smoking experience.   The SRP for this cigar is in the $12.00 to $13.00 range, but that includes the NY Cigar tax.  This is a good cigar and I think the out of town folks like myself will reach for this cigar.  This is a cigar I would purchase again and take back to my brothers of the leaf in North Carolina.

Disclaimer:  The cigar used for the cigar experience described in this assessment was purchased at Cigar Vault in Staten Island,  NY.